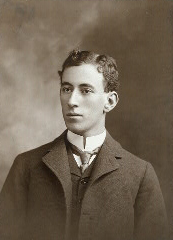 William Churchill deMille, playwright, the son of playwright Henry Churchill and Matilda Beatrice Samuel deMille, was born in Washington, N.C. He spent most of his boyhood in New York City and at Echo Lake, N.J., until 1891 when he moved with his family to Pompton, N.J. He well remembered that in the late eighties the family lived at 119 Waverly Place, New York, in an apartment directly opposite that of David Belasco, with whom his father collaborated. In those years, he and his young brother Cecil were students at the Horace Mann School, which was then on University Place. From 1891 to 1893 both attended a private school in Pompton and from then on the Henry C. deMille School for Girls, established by their mother, also in Pompton.

In the summer of 1895, his mother took William with her on a trip to Europe and left him for a year's study at Freiburg, in Baden, Germany. When he returned to America, he entered Columbia College at the age of eighteen. He was graduated from Columbia in 1900 and from the American Academy of Dramatic Arts in 1901. He took postgraduate courses for two years in Columbia University, where he concentrated on history and literature of the drama under Professor Brander Matthews, known affectionately as "Brandy" by his students. Beginning in 1902 he taught in his mother's school at Pompton, as well as in the American Academy of Dramatic Arts in New York, while continuing his stage training.

DeMille was a playwright, actor, and producer combined. In 1901 he produced his first dramatic sketch, A Mixed Foursome, at the Educational Alliance in New York. Both he and his brother Cecil were in the cast. The same year he also wrote and produced a longer dramatic work, The Forest Ring, a play for children. It was written in collaboration with Charles Barnard, who had also been his father's collaborator in The Main Line, and produced in the Children's Theater at Carnegie Lyceum, New York, with the author in the cast. 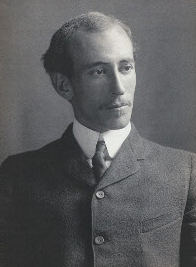 Until 1913 deMille wrote various other plays, sketches, and magazine articles. His best-known plays are probably Strongheart, produced in 1905; Classmates, written with Margaret Turnbull three years later; and The Warrens of Virginia and The Woman, produced by David Belasco in 1909 and 1911. Among his most familiar vaudeville sketches were In 1999, Food, Poor Old Jim, The Squealer, The Martyrs, and The Deceivers.

In 1914 deMille went to the West Coast to make motion pictures with his brother, Cecil B. deMille. In Hollywood they were associated with the Jesse L. Lasky Feature Play Company, which later merged with the Famous Players and then became Paramount. For twenty years William deMille was busily engaged in motion pictures, as writer, director, and producer. During that period he directed nearly sixty films, in addition to the many he wrote but did not personally produce. He also wrote many magazine and newspaper articles, largely dealing with motion picture production as a growing art. In those years deMille was connected with Paramount, Metro-Goldwyn-Mayer, and Pathé; he made films on both coasts. He was one of the first to believe in the new talking picture when it first appeared, and personally produced the second all-talking picture made by Paramount. For three years in the late 1920s he was president of the Academy of Motion Picture Arts and Sciences.

Outside the world of drama, deMille was interested in sports and politics. An athlete during his college years, he was a member of the varsity track team for three years and as a senior represented Columbia in the International Fencing Contests. For many years he played tennis—he was a member of the West Side Tennis Club in New York and one of the founders of the Los Angeles Tennis Club. During his Hollywood period deMille was active politically as a believer in Henry George's theory of the single tax; consequently, in some circles he was considered somewhat of a radical. His late father had been one of George's early disciples and so the two families became friends.

In March 1903 deMille married Anna George, youngest daughter of Henry George; they were divorced in 1927. In August 1928, in Albuquerque, N.Mex., he married Clara Strousse, who under her professional name of Clara Beranger had been associated with him in the production of motion pictures. From his first wife, deMille had two children: Agnes, the well-known choreographer, and Margaret.

DeMille spent his last years as head of the drama department, which he founded, at the University of Southern California. He died at his home in Playa del Rey, Calif., and was buried in the family plot in Hollywood Cemetery.