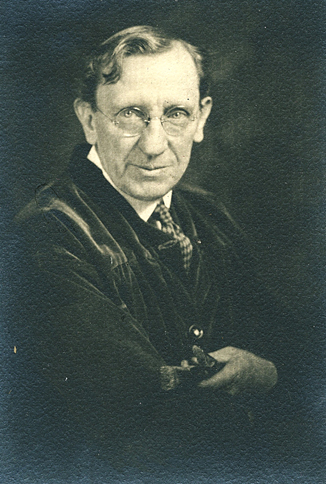 Elliott Daingerfield, American artist, was born in Harper's Ferry, Va., the son of Captain John Elliott Daingerfield and Matilda Wickham DeBrau Daingerfield. The family moved to Fayetteville in 1861 after President Jefferson Davis appointed the father to command the arsenal there and to serve as paymaster for Confederate troops. Despite financial reverses suffered by his family as a result of the the Civil War, Daingerfield was educated at private schools in Fayetteville and instructed by a tutor until he was twelve.

From an early age Daingerfield displayed great talent for art. According to family tradition, his older brother Archie gave him a box of watercolors for Christmas and he immediately began painting beautiful pictures. While a youth, he studied under a local china painter, Mrs. William McKay. Later, as an apprentice to a Fayetteville photographer, he learned how to take pictures and to tint them.

In 1880 Daingerfield left Fayetteville to pursue a career in New York City. Shortly after his arrival on 12 January, he was apprenticed to artist Walter Satterlee, associate member of the National Academy of Design. He became an instructor in Satterlee's still life class and studied occasionally at the Art Students' League. Also during his first year in New York, Daingerfield exhibited his work The Monk Smelling a Bottle of Wine at the National Academy of Design. In 1884 he left Satterlee and moved to the Holbein Studios, where he made the acquaintance of artist George Inness. The two men became good friends and Inness gave Daingerfield much advice on style and technique. In later years, Daingerfield credited Inness with having taught him the technical use of color and light, often regarded as the hallmark of his work. After Inness's death, Daingerfield wrote his friend's biography, George Inness: The Man and His Art (1911).

In the summer of 1886, Daingerfield traveled to Blowing Rock to recuperate from a severe case of diphtheria contracted during the previous winter. This proved to be a turning point in his artistic development as he was enchanted by the North Carolina mountains and made them the subject of many of his paintings. Also, it was the beginning of his long devotion to Blowing Rock where he maintained summer homes for the rest of his life: Windwood, his second residence, was completed in 1900; Westglow, his third, was built in 1916. Meanwhile, he continued to paint at the Holbein Studios in New York City where he came in contact with several noted artists including A. H. Wyant and Kenyon Cox. He was awarded the "point d'appui" in 1891. The following year he showed his painting The Mothers to members of the Salmagundi Club.

Following his second marriage in 1895, Daingerfield became interested in painting religious subjects. One year later he finished Madonna and Child. This use of the Madonna as a subject was an innovation in the American art world because many painters felt that the theme had been overdone by earlier artists. However, the painting proved to be an instant success and was reproduced on the cover of the 1896 Christmas issue of The Churchman Magazine. Earlier in the same year, Daingerfield had exhibited Could Ye Not Watch With Me One Hour ? at the Lotos Club in New York. He went on to paint The Child of Mary, The Holy Family, and The Story of the Madonna. In 1897 he studied in Europe. 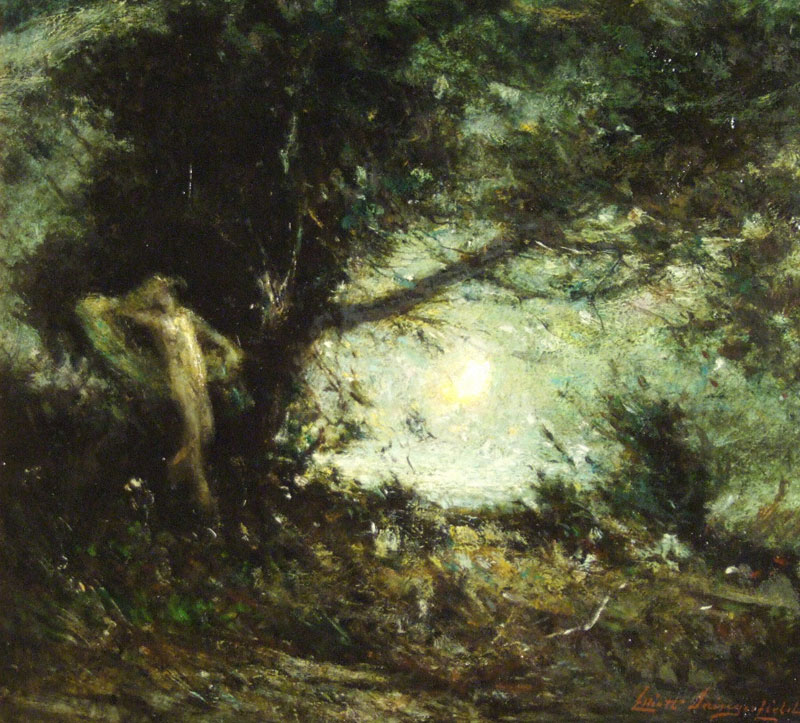 Daingerfield's religious paintings continued to attract attention. In 1901 he won the silver medal at the Buffalo Exhibition. On 14 May 1902, the National Academy of Design awarded him the Clark Prize for the best figure composition in The Story of the Madonna. This painting was acquired by Haley Fiske, president of the Metropolitan Life Insurance Company, who commissioned Daingerfield to execute a series of murals for the Lady Chapel of the Episcopal Church of St. Mary the Virgin at 139 West Forty-sixth Street, New York. During the next five years, Daingerfield labored on these two murals, The Epiphany and The Magnificat, often working eighteen hours a day. He was a devout communicant of St. Mary's and served on the vestry for over twenty years.

In 1908 he moved from Holbein Studios to Gainsborough Studios at 222 Central Park South, where he maintained his studios until his death. In March 1911 he displayed some of his works at R. C. and N. M. Vose Galleries in Boston—his first public exhibition.

Also during 1911 Daingerfield traveled to Arizona to see the Grand Canyon. The Santa Fe Railway provided him with a private car in hopes that his paintings would entice customers onto their trains. Two years later he returned to the West, taking his family with him. This time, he stayed at Carmel, Calif., and again visited the Grand Canyon. Among his paintings inspired by these trips were The Grand Canyon, The Genius of the Canyon, The Sleepers, and Trees on the Canyon Rim —the latter shown in 1914 at the Corcoran Gallery in Washington, D.C., as part of an exhibition of the Society of Men Who Paint The Far West. In the same year he published a biography of the artist Ralph Albert Blakelock. In 1918 he painted the altar picture, The Madonna of the Hills, for the Church of St. Mary in the Hills at Blowing Rock. This church was built by W. W. Stringfellow of Anniston, Ala., in memory of his wife.

Daingerfield and his family traveled to Europe in 1924. He painted in Italy at Capri, Ravello, and Venice. However, he suffered an embolism, which marked the end of his artistic work.

For many years Daingerfield was a lecturer on composition at the Art Students' League. He also taught at the Philadelphia School of Design for Women in 1896 and 1903. In addition to his biographies of Inness and Blakelock, he wrote articles on J. Francis Murphy, Henry W. Ranger, and Albert P. Ryder. He was honored with membership in a number of societies including the Society of American Artists (1903), the Virginia Historical Society (1903), and the National Academy of Design (1906).

Daingerfield died of a heart attack at his home in Gainsborough Studios and was buried at Cross Creek Cemetery, Fayetteville. A memorial exhibition of fifty-three of his paintings was held at Grand Central Galleries, New York, on 3–21 Apr. 1934. In 1947 the North Carolina State Art Society paid him tribute by staging an exhibit "Daingerfield and His Contemporaries." Finally, the North Carolina Museum of Art gathered over two hundred of his works for a showing in 1971.

Daingerfield was married twice: on 25 Sept. 1884 to Roberta Strange French (daughter of Judge Robert Strange French of Wilmington), who died in childbirth in 1891; and on 30 Dec. 1895 to Anna Grainger (daughter of Leander Grainger of Louisville, Ky.), who died 15 Nov. 1939. By his second marriage, he had two daughters, Marjorie (m. Oliver Ellsworth Holmes, Louis Lundean, and Arthur Howlett) and Gwendoline (m. Joseph E. Dulaney and Worth B. Plyler).