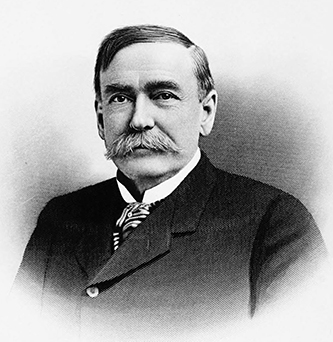 Franklin Coxe, industrialist, banker, and railroad executive, was born in Rutherfordton, the son of Francis Sidney and Jane McBee Alexander Coxe. An ancestor, Daniel Coxe, had settled in New Jersey in the early years of the eighteenth century and held title to extensive grants of land in the Carolinas and elsewhere. Tench Coxe, Daniel's grandson and the grandfather of Franklin, was assistant secretary of the treasury under Alexander Hamilton and later commissioner of revenue by appointment of President Washington. Lands in the coal fields of Pennsylvania were a source of substantial wealth to the Coxes, and it was in the interest of their landholdings in the South that Francis Coxe moved to Rutherford County.

Frank Coxe, as he usually signed himself, was educated in the local schools of Rutherfordton and briefly at Furman University in Greenville, S.C., the locality from which his mother's family had come. At sixteen he entered the sophomore class of the University of Pennsylvania, receiving his degree in 1857. After graduation he began work as a civil engineer in the anthracite coal fields of Pennsylvania, where his family's firm was rapidly becoming one of the nation's largest coal operators.

With the outbreak of war, Coxe returned to Greenville and joined Joseph Kershaw's Brigade of South Carolina Volunteers. His stay in the Confederate service was short, because the State of Pennsylvania and the federal government both threatened confiscation of his property, along with that of his Pennsylvania associates. Coxe placed the matter before President Jefferson Davis, and upon Davis's advice left the army, went to Philadelphia, and then departed for an extended stay in Europe. As a measure of aid to the Confederacy he placed funds in trust to be spent for the relief of prisoners of war from the Carolinas and Virginia.

At the war's end, Coxe returned to the South. He lived in Rutherfordton for a time and then moved to Charlotte in 1877; there, within a few years, he became president of the Commercial National Bank. While living in Charlotte he developed an interest in railroads and in the mountain area around Asheville. He was a stockholder and officer in the Western North Carolina Railroad and later president of the Charleston, Cincinnati, and Chicago Railroad. In 1886 he built the Battery Park Hotel, a fashionable and elegant structure that was attractive to tourists; it was an immediate financial success and contributed to the development of Asheville as a resort center.

In 1861, Coxe married Mary Matilda Mills, the daughter of Dr. Otis P. Mills. Though Coxe retained business interests in Pennsylvania and with his family frequently spent time in Philadelphia, he always regarded North Carolina as home. He maintained a beautiful country estate, Green River, situated between the Green and Broad rivers in Polk and Rutherford counties, and there he and Mrs. Coxe entertained countless friends.

Politically, Coxe was a Democrat. He gave the party liberal financial support but resisted all suggestions that he run for office.

Coxe died at Green River. The funeral services were conducted in Rutherfordton in St. Francis Episcopal Chapel, a church he had erected in memory of his parents, and burial was in the nearby cemetery.