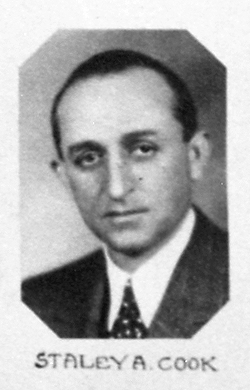 Staley Albright Cook, newspaper editor and civic leader of Burlington, was born in southern rural Alamance County, the son of George Henry and Viola Albright Cook. His father was a merchant, public official, and highly respected citizen of Burlington. His uncle, Dr. W. W. Staley (for whom he was named) was the second president of Elon College (1894–1905) and for many years a prominent minister of the Christian church in Suffolk, Va.

When Cook was three years old, his father moved the family into Burlington, and he attended elementary and secondary schools there. In his mid-teens he entered the U.S. Army and served on the Mexican border under General Donnell E. Scott, for whose company he was the official bugler. During World War I he was a member of the famous Thirtieth Division, brigaded with the British Second Army; he saw active service at the front in France and Belgium.

Following his military service, he enrolled in Northwestern University, Evanston, Ill., and earned a diploma in journalism through the U.S. Veterans Bureau. In 1931 he received a citation in journalism from the Illinois Press Association.

His career with the Burlington Daily Times-News began in 1920. He filled a succession of posts there until his retirement in 1963. He worked for fifteen years as a reporter; then became managing editor, chief editorial writer, and chief executive of the company; and in 1957 was named editor and general manager. Through his perceptive editorials and his fearless support of causes he believed right, Cook lifted the Times-News to a position of impressive leadership in the Piedmont area of the state. He also wrote occasional articles for Sports Afield and other journals and collaborated with Walter Whitaker and A. Howard White in the writing of Centennial History of Alamance County (Charlotte, 1949).

For many years, Cook was prominent in the activities of the North Carolina Press Association; he served one year as president of the Associated Press Club. He held memberships in several veterans groups, serving as state commander of Disabled American Veterans, commander of the Walter B. Ellis Post of the American Legion, and member of the Alamance Post of the Veterans of Foreign Wars. He attended many American Legion annual conventions and was tapped as the best bugler in 1934.

His political services to the state included one term in the house of representatives, where his committee assignments were wide-ranging and important: Appropriations, Conservation and Development, Insurance, Military Affairs, Manufacturing, Labor, and Printing. He was cosponsor of the original unemployment service law in North Carolina and, by gubernatorial appointment, became a member of the advisory committee of the Unemployment Compensation Commission. In that same session of the house he introduced a successful bill providing soil conservation practices and served as chairman of a joint subcommittee of the house and senate, for which he prepared the report that ultimately created the Western North Carolina Sanitorium. The Employment Security Commission was one of his successful projects in the house. He also served on the state ports authority in 1949–50, resigning in 1950 to accept an appointment to the board of conservation and development. There his leadership helped make the Alamance Battleground a state historic site.

In addition to all his state services, Cook made himself a valuable citizen of his community and region. He was a long-time chairman of the board of trustees of the Alamance General Hospital and for five years chairman of the trustees of the May Memorial Library. The location of the Burlington Mills in his home city is credited to his efforts, and he was instrumental in securing the Erwin A. Holt property as the site for the municipal building. In the early 1950s he addressed his editorial influence to the need for a new storage lake to vouchsafe the city's water supply; Lake Burlington was the result. He was chairman in 1958 of the Alamance Committee for Improved Courts. Through membership in the local Chamber of Commerce, the Kiwanis Club, and similar organizations, he was a dynamic and steady leader.

Cook was married to Grace Lillian Lane on 1 Aug. 1920. They had two daughters, Nora Lee (Mrs. Allen Drury Tate, Jr.) and Nancy Lane (Mrs. Stephen Irvin Moore, Jr.). Cook was a member of the Front Street Methodist Church for many years. He was buried in Pine Hill Cemetery, Burlington.

Files of the Burlington Daily Times-News.