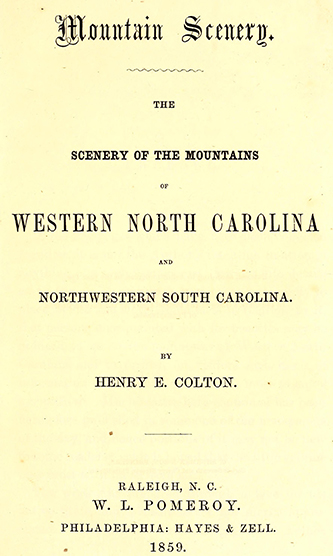 Henry Elliott Colton, naturalist, geologist, and author, was born in Fayetteville, the son of the Reverend Simeon Colton, a native of Somers, Conn., and an 1806 graduate of Yale who moved to Fayetteville in 1833 as headmaster of Donaldson Academy, and his wife, Susan Chapman of Connecticut. Where Colton received his early education is not known, but he clearly was quite well educated. His most famous and most widely circulated book was published in Raleigh by W. L. Pomeroy in 1859. This book, by the 22-year-old Colton, was Mountain Scenery: The Scenery of the Mountains of Western North Carolina and Northwestern South Carolina. The preface is dated from Asheborough, February 1859, where Colton's father had moved in 1854 to head an academy. Here, as well as elsewhere in the book, Colton expresses his indebtedness to Major J. C. Turner, chief engineer of the Western North Carolina Railroad, to one "Harry Hall" (perhaps a pseudonym), a Greensboro lawyer, and to several newspapers and periodicals from which he drew information: the Asheville Spectator, the North Carolina Standard, the Southern Quarterly Review, and the North Carolina Presbyterian. This work clearly indicates a thorough and detailed familiarity with the region. An earlier work, published when the author was just twenty, concerned Hillsborough and appeared in the Southern Literary Messenger for September 1856. In 1860 the Western Advocate in Asheville published his sixteen-page Guide Book to the Scenery of Western North Carolina.

On 27 Apr. 1862, Colton enlisted in New Hanover County as a private in the Thirty-sixth Regiment of North Carolina Troops. He was detailed for service in the Signal Corps at Smithville at the mouth of the Cape Fear River; in November 1863 he was transferred to the Thirteenth Battalion, North Carolina Light Artillery, but he was discharged on 1 Jan. 1864. When he was quite young, perhaps before his Confederate service, he worked in a printing office, possibly in Wilmington or in Asheville, and in 1858 was editor and proprietor of the Asheville Spectator. He also for a period was a legislative clerk in Raleigh. Shortly after the Civil War he was employed on the editorial staff of the New York Tribune while Horace Greeley was editor. He also served on the editorial staff of the New York World and was a contributor to a number of the leading monthlies of the time. In a series on picturesque America, Appleton's Journal between November 1870 and May 1871 published his five-part article on the French Broad River.

Exactly when Colton left North Carolina is not known, but he was a resident of Chattanooga, Tenn., in 1884–85 and was in Cleveland, Tenn., in 1889. At the time of his death in 1892 he was described as having lived in Knoxville for many years. Obituaries in the Knoxville Daily Tribune referred to him as Professor Colton. His most distinguished work, the paper reported, was as a geologist and metallurgist. He was state geologist of Tennessee during the administrations of several governors, but that of Governor Alvin Hawkins was mentioned specifically. Colton was credited with "developing a vast amount of crude mineral wealth" and also with the compilation of mineral and geological statistics. It was noted that he had contributed frequently to the Tradesman, of which he was described as associate editor, and to the Iron Age. The title page of Hand-book of Tennessee (Knoxville, 1882), a publication of the state bureau of agriculture, statistics, and mines, indicated that Colton, "practical geologist and mining engineer," assisted in its preparation. The same state agency also published Coal: Report of Henry E. Colton, Geologist and Inspector of Mines, on the Coal Mines of Tennessee, and Other Minerals (Nashville, 1883). In 1890, in the introduction to The East Tennessee, Virginia and Georgia Railway System: Mineral Wealth, Agricultural and Timber Resources of the Main Line and Branches from Bristol to the Atlantic at Brunswick, to the Gulf at Mobile, to the Mississippi at Memphis. Embracing the Steel Ore Region of the South, Colton identified himself as "Henry E. Colton, Geologist."

Colton's knowledge of the mineral resources of the whole South was mentioned in the Knoxville paper at the time of his death. "His labors for the South were without pecuniary reward," it was reported, "for he died a poor man, but his fame is a sacred heritage which will be fondly cherished by the people among whom he cast his lot." In a rather enigmatic manner, one account concluded: "His faults, if any he had, were of the flesh and not of the spirit."

Colton was married to Sophia Daniels of Fayetteville, daughter of a Presbyterian clergyman; they had no children. His funeral was held at the Second Presbyterian Church, Knoxville, and he was buried in that city.

Franklin B. Dexter, Biographical Sketches of the Graduates of Yale College, vol. 4 (1907).