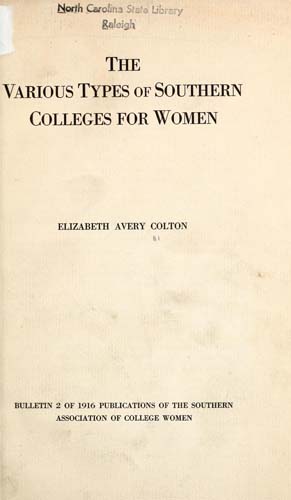 Elizabeth Avery Colton, college professor and educational crusader, was born in the Choctaw nation of Indian Territory, the eldest of eight children of James Hooper Colton and Eloise Avery Colton, Presbyterian missionaries in the territory. Elizabeth's paternal grandfather, Simeon Baldwin Colton, a minister and teacher, moved to North Carolina from Massachusetts. On her mother's side, she was a direct descendant of Waightstill Avery, one of the leaders in North Carolina government in the early days of the state. He was a delegate to the third provincial congress and a member of a commission of four who, together with a commission from Virginia, effected a treaty with the Cherokee Indians, and of another that codified the laws brought over from the colonial courts. He became the state's first attorney general in 1778. Keenly interested in education, he was active in the efforts leading to the establishment of a state university. When the state capitol burned in 1831, the only complete collection of the proceedings of the General Assembly known to be extant was in the Avery library. This religious and educational heritage was carried on by the children of James and Eloise Colton: Susanne was a missionary in Korea and Moulton A., a teacher in the Naval Academy in Annapolis; the heritage was especially marked in the eldest daughter, Elizabeth Avery.

In 1877, when ill health forced the Coltons to give up their mission work in Indian Territory, they returned to the home of Mrs. Colton's mother in Morganton. James Colton's work in various small North Carolina towns as interim pastor, evangelist, teacher, or colporteur made life for his family financially difficult. Therefore, in obtaining an education, Elizabeth had to alternate study with teaching. She began teaching immediately after her graduation at sixteen from Statesville Female College. Two years (1891–93) in Mt. Holyoke College in Massachusetts were followed by the death of her father, which brought her back to North Carolina as a teacher at Queens College in Charlotte. After six years at Queens she went to Columbia University, where she received the B.S. degree from Teachers College in 1903 and the M.A. in 1905. For three years she was an instructor at Wellesley College; then in 1908 she began to teach at the Baptist University for Women (now Meredith College) in Raleigh, as head of the department of English. An excellent teacher, she was as deeply concerned for the whole college as for her own department. The year after she started at Meredith, she introduced the reckoning of entrance requirements in units, and she was largely responsible for the increase within four years of the required number of entrance units from 11.5 to 14. She also contributed to a marked improvement in the quality of the college work.

Thus began the work that gave Elizabeth Colton a nationwide reputation as the foremost authority on the education of women in the South. A dismaying experience when she went to Mt. Holyoke—she found her A.B. from Statesville Female College virtually worthless and had to spend a year in preparation before she could enter the freshman class—had opened her eyes to the deplorable state of most colleges for women in the South. For the rest of her life she worked unceasingly to improve their standards. She was a charter member of the Southern Association of College Women, organized in 1903, and was appointed chairman of the committee on college standards in 1910; elected as secretary in 1912 and president in 1914, she continued in the latter office so long as she was physically able. She was chosen in 1915 to be a member of the executive committee of the Association of Colleges and Secondary Schools of the Southern States. Beginning early in her stay at Meredith, she made for the Southern Association of College Women (later merged with the American Collegiate Association to form the American Association of University Women) a painstaking, detailed study of colleges for women in the South. The study was based on the results of questionnaires sent from time to time to the presidents of the colleges, supplemented where possible by information from state department and denominational boards of education, accrediting agencies, and investigators for the Carnegie Foundation. The results of the surveys appeared in a series of ten candid pamphlets, the most important of which were Standards of Southern Colleges for Women (1911), The Approximate Value of Recent Degrees from Southern Colleges (1912), and The Various Types of Southern Colleges for Women (1916). Gathering the material, with only a little volunteer secretarial help, was a colossal undertaking; publishing it took heroic courage. The Various Types, which Chancellor James Kirkland of Vanderbilt referred to as "the latest of Miss Colton's high explosive pamphlets," divided the 124 women's colleges that were studied into six classes: seven standard colleges, eight approximate colleges (which at that time included the college in which she taught), six normal and industrial colleges, thirty junior colleges, twenty-one unclassifiable colleges, and fifty-two nominal and imitation colleges (including a list of twenty that had disregarded repeated requests for catalogs but appeared, from the last catalog received and from other sources, to belong to the final class) Her statements were not mere generalities; she gave the general nature of the work done by each group and then gave specific information about specifically named colleges. The Southern Association of College Women sent copies of this bulletin to four thousand girls graduating in 1916 from accredited high schools.

This widespread publicity brought a flood of outraged protests. There were several threats of lawsuits, not one of which ever materialized, for she could prove every syllable she wrote. Blustering, indignant college presidents who insisted on interviewing her were sometimes disarmed by her appearance—dainty, slender, and distinctly feminine. The History of the American Association of University Women records an especially dramatic interview. "An enraged president of a bogus school threatened to shoot Miss Colton, and thrust his hand in his pocket, apparently to make good his threat. Miss Colton looked calmly at him; he dropped his eyes and retired before her steady, honest gaze. Shortly afterward he closed his so-called college." These surveys were more effective than the 1918 proposal her joint committee of the Southern Association of College Women and the Association of Colleges and Secondary Schools of the Southern States presented to the legislative assembly of every southern state. The bill, proposing certain minimum standards a college must meet before being granted a charter, passed only in North Carolina and only with modifications greatly lessening its effectiveness.

The influence of Miss Colton's work is incalculable. The History of the American Association of University Women says that her publications began a new era in the education of women. Both B. E. Young, Vanderbilt professor, and Edward Kidder Graham, president of The University of North Carolina, called them epochmaking. For many years they had users all over the nation, including the U.S. government, the Carnegie Foundation, the Association of Colleges and Secondary Schools of the Southern States, the General Education Board, the Association of Medical Colleges, the Federation of Women's Clubs, departments of education, denominational boards of education, field secretaries of the YWCA, managers of teachers' agencies, educational directories of magazines, and leading colleges and universities.

The magnitude of her work is the more remarkable in that it was accomplished in so short a time, only about ten years. A malignancy in the spine from which she suffered acutely during the last two years of her teaching made her a complete invalid from 1920 until her death in Clifton Springs, N.Y. She was buried in Forest Hill Cemetery in Morganton.

Martha Talbot and L. K. M. Rosenberry, The History of the American Association of University Women (1931).