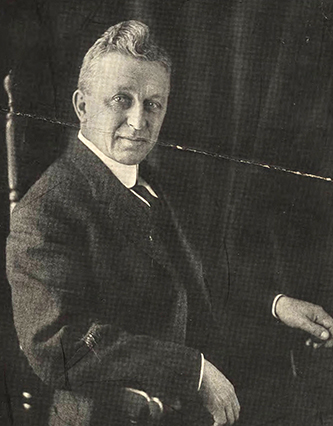 John Charles Campbell, educator and social reformer, was born in La Porte, Ind., to Gavin and Anna Barbara Kipp Campbell. He spent his youth in Wisconsin, where he was graduated from Stevens Point High School. After graduating from Williams College in 1892 and Andover Theological Seminary in 1895, he taught three years in a mountain school at Joppa, Ala., before returning to Stevens Point to teach for one year. He subsequently served as principal of the Pleasant Hill Academy in Tennessee and as superintendent of secondary education, and dean and president of Piedmont College, in Demorest, Ga. (1901–7).

Campbell's interest in the Appalachian region, especially the western counties of North Carolina, began during his work in the mountains as a young employee of his father's railroad company. In May 1908 he attended the National Conference of Charities and Corrections in Richmond, at which he explained to Mrs. John Glenn, wife of a Russell Sage Foundation official, his plans for making a comprehensive survey of the region. Provided funds by the foundation, he and his wife, Olive Dame Campbell, traveled throughout the region until October 1912. Then the foundation created a Southern Highlands Division, of which Campbell became chief executive officer. Offices were established in March 1913 in Asheville, where the Campbells made their home until his death.

The aims of the division were to assemble and disseminate accurate information on economic, cultural, and social conditions in the region; to promote interagency cooperation; and to redirect philanthropic work toward the finding of viable alternatives for economic and social organization. In 1913, Campbell issued a call that resulted in the formation of the Conference of Southern Mountain Workers (now the Council on the Southern Mountains), of which he served as executive secretary until his death. The conference, an annual forum for discussion among teachers, preachers, social workers, and others in the mountains, in turn formed the Southern Highlands Handicraft Guild fifteen years later.

Throughout his years of work in the mountains, Campbell collected materials for a comprehensive survey of the Appalachian region. At his death, only the preface and one chapter of his projected book had been written; from his notes, his wife completed the writing. The Southern Highlander and His Homeland, published in 1921, immediately became and has remained after more than a half century one of the most comprehensive and durable studies of the region. In it the Campbells argued, as they did in many other contexts, that effective work for social change in the mountains should respect and seek to preserve the rich cultural heritage of the region and its people. Toward that end, Campbell studied intensively the Danish folk schools and other experiments in the use of traditional culture as a base for progressive social reconstruction. After his death, his wife established on the Danish model the John C. Campbell Folk School at Brasstown.

Campbell was married first to Grace H. Buckingham, who died in 1905. His second wife was Olive A. Dame of Medford, Mass., whom he married on 21 Mar. 1907 and by whom he had two children, Barbara and Jane, both of whom died in infancy. He was a member of the Congregational church.

John C. Campbell, The Future of the Church and Independent Schools in Our Southern Mountains (1917), "Mountain and Rural Fields of the South," Annual Report of the Home Missions Council (1916), Piedmont College (n.d.), "Social Betterment in the Southern Mountains," Proceedings of the National Conference of Charities and Corrections (1909), and The Southern Highlander and His Homeland (1921. rpt., 1969).

Henry D. Shapiro, Introduction to The Southern Highlander and His Homeland.

David E. Whisnant, "Controversy in God's Grand Division: The Transformation of the Council of the Southern Mountains," Appalachian Journal 2 (1974).