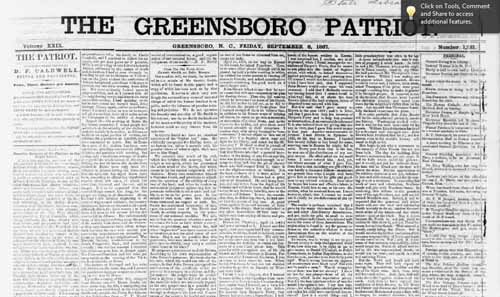 David Franklin Caldwell, businessman, editor, and politician, was born in Guilford County, about one mile from Greensboro, the son of Thomas and Elizabeth Caldwell. He received the limited education then available in the schools of Greensboro. For several years he worked on his father's farm outside the city and then, from 1841 to 1848, he worked with his three brothers in their father's small mercantile business. Tom Caldwell and Son's Cheap Store, as it was called, dealt in cheap cash bargains and gave credit. Caldwell's flair for business became quite evident as the store prospered.

Caldwell's political career began in 1848, when he was elected as a Whig to the North Carolina House of Commons. He was very popular with the people of Guilford County and was their choice almost unanimously for five successive terms until he retired in 1861. He was a strong Unionist, as were most of the Guilford legislators, and a bitter opponent of secession. He began to read law in 1860 and was admitted to the bar in 1861. At the outbreak of the Civil War he was already engaged in a lucrative law partnership with James A. Long in Greensboro. When North Carolina seceded, he went along with the majority and applied for a commission in the Confederate Army. The governor of the state, doubting his loyalty to the Confederacy because of his fierce opposition to secession, refused him a commission. He therefore enlisted as a private and served for two years.

In 1864, Caldwell reentered the political arena and was elected county attorney. He remained in this office until he retired from the legal profession, disgusted with the new code, in 1868. Caldwell is the authority for a report that President Lincoln considered him as a possible choice for provisional governor of the state in 1865. However that may be, he was a delegate to the state constitutional convention in that year.

In 1867, Caldwell took control of the Greensboro Patriot, the city's leading newspaper. After a year as proprietor and editor, he sold the paper to James and Robert Albright. In 1868, having affiliated with the Democratic party, Caldwell was elected to the U.S. Congress but was disqualified from serving by the Fourteenth Amendment. In 1872 he was a delegate to the Democratic National Convention that nominated Horace Greeley for the presidency. In 1878, Caldwell was elected to the state senate, where he served for one term and was chosen a member of the committee to compromise the state debt. He was described as an able and talented legislator who took a prominent part in debate on nearly every bill during his term.

Throughout his career, Caldwell took an intense interest in business affairs. He was especially interested in the building and financing of the North Carolina Railroad, driving its last spike on 29 Jan. 1856. He was also a stockholder in various other railroads and cotton mills. In 1889 he organized the Bank of Guilford and was made its president.

Caldwell never married. In 1898 he was paralyzed by a stroke; after nearly a year of feeble health he died from the effects of another stroke. He was buried in the cemetery of Buffalo Presbyterian Church, of which he had been a member. There are no known existing portraits.

Speech of D.F. Caldwell, of Guilford, on the convention question : delivered in the House of Commons, December 23, 1850. WorldCat: https://www.worldcat.org/title/speech-of-df-caldwell-of-guilford-on-the-convention-question-delivered-in-the-house-of-commons-december-23-1850/oclc/38300337