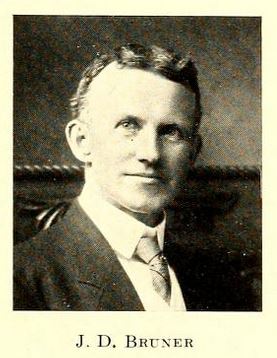 James Dowden Bruner, educator and college administrator, was born in Leitchfield, Ky., the son of Isaac Willis and Maggie Ellen Rogers Bruner. The recipient of an early classical education, he was awarded degrees by Franklin (Ind.) College (A.B., 1888) and by Johns Hopkins University (Ph.D., 1894). He pursued additional studies in linguistics in universities in Paris and Bologna in 1892–93, and was awarded the honorary Litt.D. by Georgetown (Ky.) College in 1917.

Bruner taught Latin at Georgetown College in 1885–86 and French and German at Franklin College from 1887 to 1889. He was principal of Cary's Boy's School, Baltimore, Md., prior to his appointment as assistant professor of romance languages at the University of Illinois in 1893. He left this latter position in 1895 to become assistant professor of romance languages and literature at the University of Chicago. There he advanced to the rank of associate professor and served two years as the acting head of his department.

In 1905, Bruner became associate professor of romance languages and chairman of the department at The University of North Carolina. After four years there, he was elected to succeed John C. Scarborough as president of Chowan Baptist Female Institute, Murfreesboro, in July 1909. Under his administrative leadership, the trustees of the institute approved the change of its name to Chowan College; the state legislature allowed charter changes that enabled the granting of the standard A. B. degree, with the first such degrees awarded in 1911. Bruner earned the plaudits of the institution's board of trustees for his success in securing pledges of financial aid to the debt-ridden college and for an ambitious plan aimed at securing a sizeable general endowment.

His report to the college's board of trustees in May 1913 noted a greatly expanded curriculum, including the addition of instruction in the German and French languages, and a record enrollment of 150 during the previous academic year. One year later, however, Bruner submitted his resignation in the wake of rumors attributing to him certain unspecified moral indiscretions. The college's board of trustees accepted his resignation, after refusing to prefer charges against him or to be a party to any investigation of his conduct.

A Democrat and a Baptist, Bruner married Elizabeth Cutting Cooley (d. 9 Apr. 1931) on 19 Dec. 1894. To them were born three sons, James Willis, Arthur Cutting, and Lee Moulton. In 1935, Bruner married Helen Cooley McNitt, a niece of the first Mrs. Bruner.

Minutes of the Board of Trustees of Chowan College (Murfreesboro) 1909–14.

Register of the Officers and Faculty of the University of North Carolina 1795 - 1945, UNC Libraries: http://www.lib.unc.edu/ncc/ref/unc/faculty.html