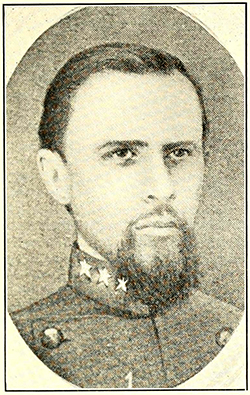 Hamilton Allen Brown, Confederate officer and planter, was born the son of Hamilton and Sarah Gwyn Gordon Brown at Oakland, the old Gordon homestead in Wilkes County. He attended the Naval Academy at Annapolis as a member of the class of 1858 but was not graduated. On 3 June 1861 he became first lieutenant of Company B, First North Carolina Regiment. Because of his military training, he was detailed by Governor John W. Ellis to drill recruits and fit them for service. In the summer of 1862, when Colonel M. S. Stokes and other officers of his regiment in line for promotion were killed at Mechanicsville, Brown was placed in command. He was promoted to colonel in December 1863 and soon afterward took command of his regiment, which was then attached to General Stonewall Jackson's division. He was placed in command of the division's sharpshooters and is given credit for much of the fame of Jackson's division. It was related that Brown never ordered a man into battle but instead always said, "Follow me." He was wounded thirteen times but always stayed close to his men and returned to duty as quickly as possible.

On one occasion, Brown was left on the battlefield when his injuries were believed to be fatal. The Reverend George Patterson, chaplain of the Third Regiment, asked if he wanted a burial service read while he was still alive, explaining that there would probably be no time for the service after his death. The offer was accepted, and the service from the Book of Common Prayer was read. Brown fortunately recovered from his wounds; many years later in Tennessee he again met Patterson, who expressed surprise to find living a person over whom he had read the burial service. Brown replied that hearing his own burial service had brought him back to life instead of laying him away.

Brown served in the battles of Gettysburg, Culp's Hill, Richmond, and Petersburg, as well as in the campaigns of the Wilderness, Spottsylvania, and the Valley. On 24 Mar. 1865, at Fort Stedman, he and a portion of his command were captured by General Napoleon McLaughlin. Shortly afterward, McLaughlin was captured by a Confederate force. Later, however, the Confederates were forced to surrender; Brown was taken to Washington and then to Johnson's Island and finally was confined at Fort Delaware until 24 June 1865, when he took the oath of allegiance.

Brown returned to Wilkes County and played a minor role in local events of the early Reconstruction period. In 1868 he married his cousin, Amelia Selina Gwyn of Green Hill. In about 1871 they, together with Brown's brothers and a sister, moved to Columbia, Tenn., where they owned land. Brown increased his holdings and became a planter of modest means. He and his wife were the parents of four sons: Hugh Thomas, Hamilton, Gordon, and John. Brown was buried in St. Paul's Episcopal Church Cemetery, Wilkesboro.