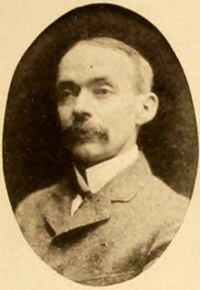 John Everett Brady, educator and writer, was born in Alamance County, the son of Rufus Archibald Brady and his wife, Martha Jane Hart.

Brady attended The University of North Carolina, receiving the A.B. degree in 1881. Traveling to Europe, he studied also at the Sorbonne and at Heidelberg. In Heidelberg he received both the A.M. and the Ph.D. degrees from the German University in 1888.

Returning to America the same year, Brady became a professor at Smith College in Northampton, Mass., where he served as head of the English and Latin departments for forty years (1888–1928). He wrote several works, including Sound Changes in Modern Greek (in German), Studies in Quintus Curtius Rufus, and Women in Roman Literature. He was a member of the American Philological Association and the Classical Association of New England.

A Presbyterian, Brady spent most of his life at Northampton. He was married first on 20 Aug. 1889 to Mary Taylor Seelye. Following her death, he married Annie McGhee Joyner, a widow from Franklinton. Brady had no children of his own but left several stepchildren. He spent his last years at Franklinton and following his death there was buried in Fairview Cemetery.