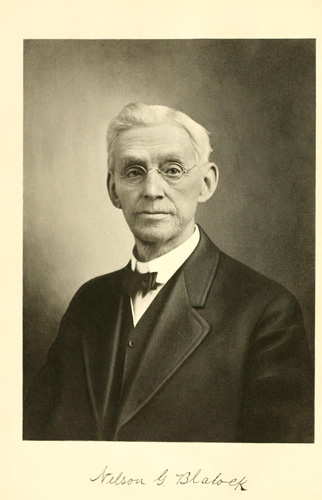 Nelson Gales Blalock, physician, was born in rural Mitchell County. It is reported that his preparatory and subsequent college education were pursued in his home county, although the specific institutions are not listed.

He went to Jefferson Medical College, Philadelphia, and was graduated with an M.D. degree in March 1861. He went immediately to Decatur, Ill., where he began a private practice. The demands of the Civil War challenged his professional skill, and he soon became a surgeon attached to the 115th Illinois Volunteers. He established an enviable record in the service. At the close of the war, he returned to Decatur and remained there until 1873.

Blalock left Decatur with a wagon train headed for the West Coast, finally settling in Walla Walla, Wash. There he continued his profitable practice until his death. He is said to have performed an average of one surgical operation a day, and delivered more than five thousand babies in his lifetime. His medical methods were very innovative; for example, he had early x-ray equipment in his office.

Blalock did not allow a busy practice to rule out his interest and participation in civic affairs. He served as mayor of Walla Walla for several terms and was a trustee of Whitman College there and also a member of the local school board. Among his state-wide activities, he is credited with inspiring a constitutional convention for Washington (1889) and helping to write the constitution himself.

Blalock had a variety of interests in agriculture and related projects: fluming lumber from nearby mountains, cultivating the growing of wheat in the uplands, and developing the still-famous Blalock Orchards, where he specialized in both fruit and vegetables.

He was married first to Panthea A. Durham, with whom he had one son, who succeeded to his father's practice in Walla Walla. Mrs. Blalock died in 1864. He later married Marie G. Greenfield, and they had two daughters.

He died in Walla Walla and was labeled at his death "the foremost citizen of the State of Washington."