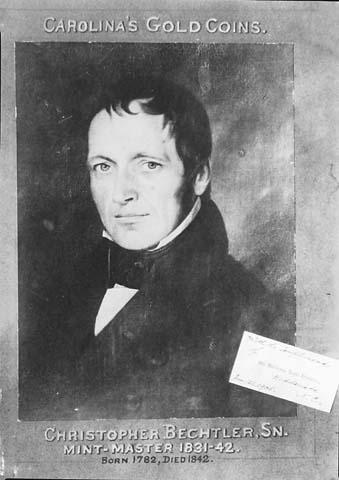 Christopher Bechtler, metallurgist, goldsmith, jeweler, and coiner, was born in the Grand Duchy of Baden in Germany, probably to an insignificant family of the peasantry or middle class. Nothing is known of his education. It is likely that his father was a skilled artisan, for Bechtler became a gunmaker and goldsmith of some repute in his neighborhood and passed the craft on to his son, Augustus.

These talented and successful craftsmen might have been forgotten long ago had they not decided to emigrate to the United States. Apparently leaving part of his family behind in Germany and bringing one or two sons and perhaps a nephew with him, the middle-aged Bechtler traveled to New York by way of Havre, landing in October 1829. Moving south immediately, he stopped briefly in Philadelphia to begin naturalization procedures and most likely arrived within a few months in Rutherford County, N.C., which would be his home for the remainder of his life. Bechtler shortly established himself in a shop in Rutherfordton as a jeweler and maker of clocks and watches. Although an alien legally unable to hold land, he made arrangements through a trustee to purchase a farm in mid-1830.

Bechtler did some gold mining on his farm, and it was the Carolina gold rush, then rapidly flowering, that brought him a new and noteworthy career. By 1830, much of Western and Piedmont North Carolina was caught up in the quest for gold, which increasingly became a medium of exchange in the absence of plentiful hard currency. Yet citizens wanted standard gold coinage, and some miners resorted to the arduous, dangerous trip to the U.S. Mint in Philadelphia to exchange their precious metal for specie. Other citizens, including a majority of the General Assembly, began a prolonged battle to persuade Congress to establish branch mints in the southern gold region. Meanwhile, Templeton Reid in Georgia began the private coinage of domestic gold on a limited scale, an undertaking perhaps not known to the Bechtlers.

By this time, production of gold in North Carolina, much of it mined near Rutherfordton, had reached an annual volume of $500,000. In 1831 local leaders convinced Bechtler, who already assayed gold, to begin coinage of the metal and create a sound regional currency. Bechtler had theretofore experimented with coining gold pieces valued at $2.50 and $5.00, and he set out to enlarge the business. Once his local reputation for integrity spread to other areas, he was eminently successful. During the first four years of his new endeavor, Bechtler minted $109,000 worth of gold. In the following single year, he produced nearly $700,000 in private coinage. Throughout the first nine years of his operation, Bechtler was to coin some $2,241,840 in gold and flux (melt) an additional $1,384,000 worth of bullion. Toward the end of the period, the federal government finally began operation of a branch mint in nearby Charlotte, but Bechtler continued his decreased, although still substantial, business. 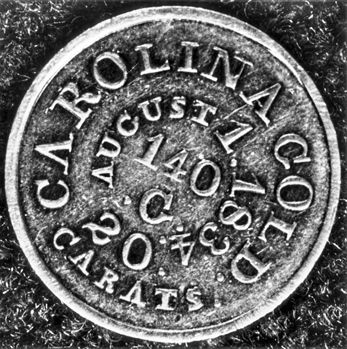 Bechtler's minting venture succeeded because his coins, available in several varieties, filled a need for a circulating medium in Western North Carolina, as well as neighboring states, and because he maintained a personal reputation for honesty in transactions. He charged a 21/2 percent fee for coinage of bullion and turned out gold pieces in several varieties but only three denominations. Besides the $2.50 and $5.00 gold coins, he produced in 1832 the first gold dollar minted in the nation, a coin not made by the federal mints for nearly two decades thereafter. Generally his products bore his name, their weight in gold, and their place of origin or manufacture stamped upon them. Bechtler himself designed and fabricated all of the hand-operated equipment with which he produced his coins.

Establishing his mint after an already successful career as a goldsmith and jeweler, Bechtler obviously continued his other interests An expert creator of various golden trinkets, he was also a clever gunsmith. In 1832, the Bechtlers had invented a device for accurately firing a rifle at the then rapid rate of eight rounds per minute. Christopher Bechtler evidenced his concern for religion when he became a charter member of the Rutherfordton Presbyterian Church in 1835.

Bechtler apparently died in or near Rutherfordton. His death signaled the incipient end of the mint that had supplied much of the circulating medium of the region and the nation's first gold dollar. After his demise, his son and assistant Augustus Bechtler briefly managed the mint, before Christopher Bechtler, Jr., a nephew, assumed responsibility for the enterprise. He was reportedly a man of questionable scruples. The insignificant remaining operations ceased within a few years, and Christopher, Jr., moved away. Nevertheless, Bechtler coins continued to circulate freely in the region for many years and have since become rare prizes for collectors.

Bechtler's will revealed that he had a wife and five children, but his wife and most of the offspring apparently never came to North Carolina. Bechtler's remains were removed from Rutherfordton to the North several decades after his demise.