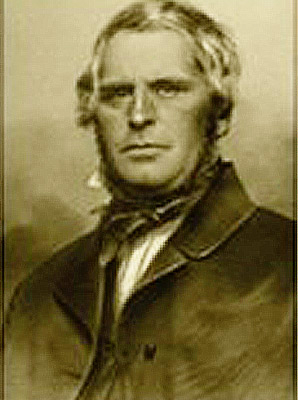 Stephen Barton, Jr., manufacturer and brother of Clara Barton, was born at Oxford, Mass., the son of Stephen and Sarah Stone Barton. As a young man, he joined with a brother in the lumber business and founded a mill town—North Oxford—around the sawmill and other facilities connected with their business. Stephen enjoyed a special relationship with his younger sister Clara and provided her first employment in his cloth factory when she was seventeen years old. In 1856 he purchased a tract of timberland and a steam sawmill on the Chowan River in Hertford County. At this site, about two miles north of the mouth of Meherrin River, Barton and a crew of New England artisans, including several members of his family, erected another mill town, this one called Bartonsville. A post office was established there, along with wharves, lumberyards, a gristmill, warehouses, and other facilities. In 1860 he acquired North Carolina rights to machinery for making plow-handles and plowbeams, and he had produced many thousands by the time the Civil War broke out in the spring of 1861. Caught with most of his manufactures in storage, Barton sent his crew north and determined to sit out the war at Bartonsville in order to protect his investment.

Although Barton opposed both slavery and secession, he maintained a neutral position in the war and local Confederate garrisons, respecting his position, left him alone. Union gunboat officers operating on the Chowan also understood Barton's situation and did not annoy him, although they were sometimes able to deliver to him mail or news from his friends and relations in the North. In the meantime, his relations, particularly his sister Clara, plotted scheme after scheme for bringing him out of North Carolina, only to be blocked by his determination to maintain his lonely vigil at Bartonsville.

In 1864, with the families of Confederate soldiers in Hertford, as elsewhere in the South, beginning to suffer from want of supplies, Barton and a few sympathetic friends arranged to bring supplies from Norfolk in exchange for their own cotton. With a pass from Union officers who controlled the eastern side of the Chowan, Barton himself made several trips by wagon into Pasquotank County, where Union agents purchased his cotton and gave him bacon and other commodities for distribution to the poor of Hertford County. On one such mission, Barton was arrested by Union authorities on suspicion of being a Confederate agent, imprisoned at Norfolk, and mistreated by prison officials. His health broke, and, by the time Clara was able to learn of his condition and have him freed, he was near death. He joined her at a field hospital near Richmond, and the two of them went to her home in Washington, D.C., where he died. His sister accompanied the remains to Oxford, Mass., where Stephen was buried in the Barton family cemetery. Three weeks later, on 1 Apr., a Union cavalry patrol arrived at Bartonsville and, on the assumption that it was Confederate property, burned the entire establishment.

Stephen Barton was married to Elizabeth Rich of Charleston, Mass., and by her had one son, Samuel R. Barton, who assisted him in creating the mill town at Bartonsville.