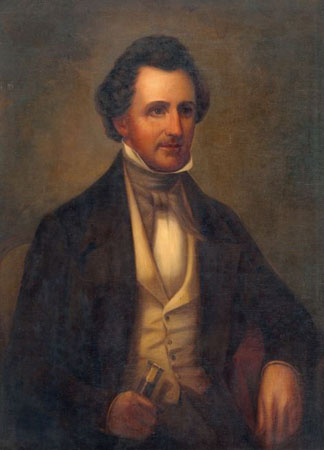 Robert Ruffin Barrow, planter, was born in Halifax County, the eldest child of Bartholomew Barrow and his first wife, Ascension Slatter, daughter of James Slatter and Charity Cotten. He was reared in North Carolina a few miles east of Enfield and accompanied his father to Louisiana in 1820. He settled in Terrebonne Parish in 1829 and called his home Residence. Before the Civil War, he built an agricultural empire equaled by few planters of the antebellum South. At the time of the war, he owned sixteen plantations in three Louisiana parishes, large land holdings in Texas, and over seven hundred slaves. Barrow did not confine his interests solely to planting but was deeply concerned with the political issues of his day and the gathering storms of the Civil War. He wrote and published many pamphlets on national and regional matters, several of which have survived. In a twenty-page pamphlet, On the Political Parties Of the Country, he decried secession as a means of settling the South's problems.

When war came, Barrow was sixty-three years old and did not serve in the Confederate Army. He did support the southern cause, however, by financing the construction of the Pioneer, one of the first submarines ever designed. The builder of the Pioneer was Captain Horace Hunley, Barrow's brother-in-law. The boat was launched on Lake Pontchartrain near New Orleans in February 1862 and was demonstrated with partial success. It sank on one of its early trials, however, and was raised, only to be immersed again to prevent its capture by Admiral Farragut of the Union navy. After the war it was recovered from the bottom of Lake Pontchartrain and was exhibited in Jackson Square, New Orleans. Later in the war, Hunley built other submarines, one of which, the Hunley, sank the Federal warship Housatonic at Charleston, S.C.

In 1850, at the age of fifty-two, Barrow married Volumnia Washington Hunley of Smith County, Tenn. They made their home at Residence, near Houma, La., and had two children, Roberta and Robert R., Jr., who both married and left descendants. Barrow died in New Orleans and was first buried in Girod Cemetery there; his remains were later removed to Magnolia Cemetery at Houma.

Robert Ruffin Barrow. Portrait painted by Rudolph Bohunek, between 1909-1913. Courtesy of the Enyclopedia of Louisiana. Available from http://knowla.org/image.php?rec=144&img=124 (accessed April 2, 2013).