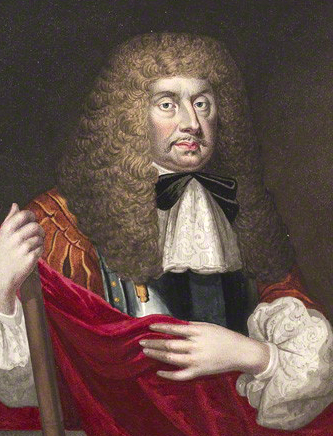 John Berkeley, first Baron Berkeley of Stratton, was one of the eight Lords Proprietors granted control of the Province of Carolina by King Charles II in the charters of 1663 and 1665. Berkeley, a veteran of the English Civil War and strong supporter of Charles II, also served as ambassador to Sweden, Member of Parliament, Lord President of Connaught in Ireland, Lord Lieutenant of Ireland, and Proprietor of New Jersey. John Berkeley was the youngest son of Sir Maurice Berkeley of Somersetshire and brother to Sir William Berkeley, also a Lord Proprietor of Carolina and a governor of Virginia. Berkeley married Christian or Christiana Riccard, daughter of well-to-do merchant, Sheriff of London, Governor of the East India Company, and Member of Parliament Sir Andrew Riccard. John Berkeley had three sons who all claimed his title and a daughter.

Before becoming a Lord Proprietor, Berkeley was knighted in 1638 by Charles I and became a Member of Parliament in 1640. After being expelled from Parliament, Berkeley took part in the First English Civil War on the royalist side. During the Civil War, he served in the royal army as Commander-in-Chief of Devonshire and captured Exeter for the royalists before later surrendering it to Parliamentary forces. Berkeley earned the title first Baron Berkeley of Stratton in 1658.

After the Civil War in England in 1663, Charles II named Berkeley one of eight “true Lords and Proprietors” over the newly formed Province of Carolina. The original Province of Carolina was a vast area of land that stretched from the 31st to the 36th northern parallel – approximately the modern-day southern border of Georgia up through Raleigh – and on westward. Charles’s subsequent 1665 charter extended the border of the Province north to an area near the modern-day Virginia southern border and south to modern-day mid-Florida. The vastness of this land made difficult the governing of the territory, worsened by the challenge of governing from England.