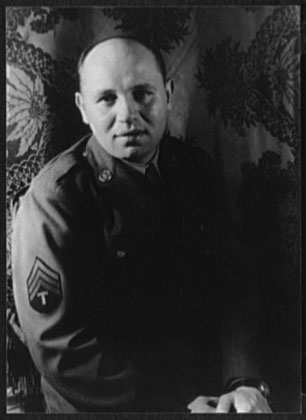 Romare Bearden was born in Charlotte in 1911. Although his family moved north when he was only four years old, he said of his home state, “Most artists take some place, and like a flower, they sink roots, looking for universal implications. . . . My roots are in North Carolina.” Indeed, many of his paintings and collages were drawn from memories of his time in North Carolina.

The Beardens eventually settled in Harlem, an epicenter of African American culture in the 1920’s. Harlem society was important to Bearden’s development—the young man met many prominent musicians, artists, and writers at social and intellectual gatherings. In 1935 Bearden graduated from New York University and gained employment as a caseworker for the New York City Department of Social Services, a job he would hold until 1969.

He also began taking art classes led by German artist George Grosz, who greatly influenced the burgeoning painter. Having served in the army during World War II, Bearden used the GI Bill to take classes at the Sorbonne in the early 1950s. His love of learning—from art, literature, and, indeed, life—enhanced his art.

By the early 1960s Bearden settled into the techniques of collage and photomontage, assimilating newspaper and magazine clippings, fabric, graphite and oils to create multifaceted compositions. Through these techniques Bearden sought to draw a relationship between a culture of the past and of the present.

Bearden relied on two fundamental assumptions to inform his art. First, he practiced the process of fracturing in order to bring a generality to his work. He amalgamated photographic images including African masks, animal eyes, and even vegetation to construct fragmented images of his subject’s faces to universalize his subjects.

The second assumption that informed Bearden’s work was his belief that art must maintain a quality of artificiality; a quality that his artwork achieved primarily through distortion and abstract colorization. Bearden remarked that the function of art was not to depict reality, but to add to our existing concepts and perspectives. Photographs, he maintained, captured the essence of reality far better than any artist could hope to achieve. This ideal prompted Bearden’s disinclination to paint about African Americans in terms of propaganda and protest, but instead, to express attitudes towards human existence.

Bearden wrote extensively on the subject of art. His publications include A Painter's Mind: A Study of the Relations of Structure and Space in Painting with the painter Carl Holty (1969), and A History of African-American Artists: From 1792 to the Present with journalist Harry Henderson, published posthumously (1993).

Bearden’s work can be found in some of the nation’s most prestigious collections, including the Metropolitan Museum of Art, the Whitney Museum of American Art, and the Studio Museum in Harlem. In 1954 Romare Bearden married Nanette Rohan, a dancer and choreographer from New York. In 1987, Bearden was awarded the National Medal of Arts, the nation’s highest honor for artistic excellence. He died on March 12, 1988, in New York City, leaving behind a legacy of artwork and literature that has forever altered African American art. In Charlotte a street and a park are named in his memory.

Romare Bearden's Works from the National Gallery of Art

what month was he born in

what month was he born in

According to a biography at the National Gallery of Art, he was born in September. https://www.nga.gov/collection/artist-info.6845.html