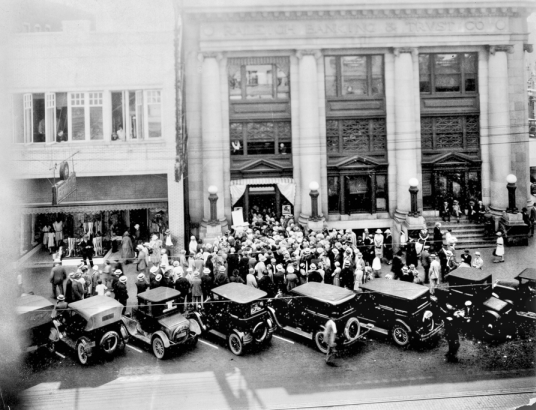 Between the stock market crash of October 1929 and mid-March 1933, 215 North Carolina banks, with a combined $110,854,000 in assets, failed. Bank runs had increased in early 1933, prompting the General Assembly to give authority to N.C. Banking Commissioner Gurney P. Hood to limit withdrawals. However, only a few banks made use of this power, and runs continued to occur.

To stem panic and help prevent bank runs, individual governors around the country began to declare bank holidays. After a New York State bank holiday was proclaimed on 4 Mar. 1933, Hood met with state bankers to plan a similar action for North Carolina. Between 6 and 8 March of that year, Governor John C. B. Ehringhaus proclaimed a bank holiday, making North Carolina the last state to suspend bank activity. The day after his inauguration President Franklin D. Roosevelt called a national bank holiday to extend from 5 to 9 March (it was later extended for an indefinite time). Congress moved quickly to pass the Emergency Banking Act, which authorized the bank holiday and established a mechanism for the orderly reopening of all banks. The act also created the Federal Deposit Insurance Corporation (FDIC) and put more authority and responsibility in the Federal Reserve Board, thus providing for more rigid control over capital requirements in state banks. The move proved to be successful. By 18 March, it was announced that 222 banks were back in operation in North Carolina.

The Economics of the Great Depression. ANCHOR. https://www.ncpedia.org/anchor/economics-great-depression

The Economics of Recovery and Reform. ANCHOR. https://www.ncpedia.org/anchor/economics-recovery-and