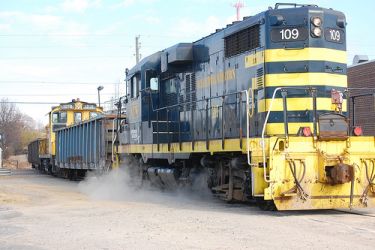 The Atlantic & Western Railway Company was chartered on 7 Mar. 1899 under sponsorship of the Edwards family of Sanford. It took over the operation of a line extending 12 miles west from Hope Mills that had been built by the Enterprise Land & Improvement Company. Between 1903 and 1913 it built its own line east from Sanford to Lillington (26 miles); plans to continue to Goldsboro were never realized. In 1926 the company was sold under foreclosure and reorganized as the Atlantic & Western Railway (A&W), which continued to operate a line between Sanford and Lillington until 15 Dec. 1961, when all but three miles from Sanford to Jonesboro were abandoned.

The A&W was reorganized on 1 Jan. 1970 as the Atlantic & Western Corporation. Since 1988, it has been the property of Rail Management and Consulting, based in Florida. In 1990 the A&W acquired the former Cape Fear & Yadkin Valley Railroad line between Sanford and Greensboro, long operated by the Southern Railway. What began as a link between Sanford and the east has thus become a route to the west. By the early 2000s the railroad operated ten miles of track and had connections with CSX and the Norfolk Southern Railroad.