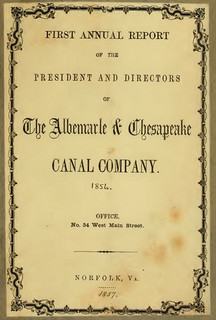 The Albemarle and Chesapeake Canal, a man-made waterway connecting Albemarle Sound with the Chesapeake Bay, was proposed initially by William Byrd II in 1728. Surveys were made, but engineering complications held up the project until the 1850s. Upon its opening on 9 Jan. 1859, the canal provided an economic link between North Carolina and Virginia. The full canal was 75 miles long, but only 14 miles cut through land. Of those, 5 miles were in North Carolina, essentially bisecting Currituck County at Coinjock. The rest of the canal followed natural channels and dredged rivers.

Construction was authorized by bills introduced in the North Carolina and Virginia legislatures in 1854. Bonds to pay for the project, totaling just over $1 million, were sold in the two states. Whereas 50 years before, the nearby Dismal Swamp Canal had been dug by hand, newly invented steam dredges (known as "Iron Titans") were used to cut through massive stumps, roots, and buried logs. During the Civil War the canal was the site of partisan action, with ships sunk at its mouths to block entry.

After the war, commercial use of the canal increased, especially by steamship lines. By 1892, 7,717 vessels (including 4,061 steamers) used the waterway. On 30 Apr. 1913 the canal's operation-a private venture until that point-was taken over by the federal government. In 1988 a new high-level bridge replaced the old swing span at Coinjock. By the early 2000s the canal was used largely by pleasure craft as part of the Intracoastal Waterway.

Alexander Crosby Brown, Juniper Waterway: A History of the Albemarle and Chesapeake Canal (1981).

How deep was the canal? What

How deep was the canal? What was the largest ship that could transit the waterway?

Thanks for visiting NCpedia and sharing this question.

I am unable to find a quick answer to this question.  I'm going to consult the resources the author used in writing this entry.