Agriculture in North Carolina during the Great Depression

“Well somebody told us Wall Street fell
But we were so poor that we couldn’t tell.
Cotton was short and the weeds were tall
But Mr. Roosevelt’s a gonna save us all.”

—from “Song of the South,” written by Bob McDill about the Great Depression era and recorded in 1989 by the band Alabama 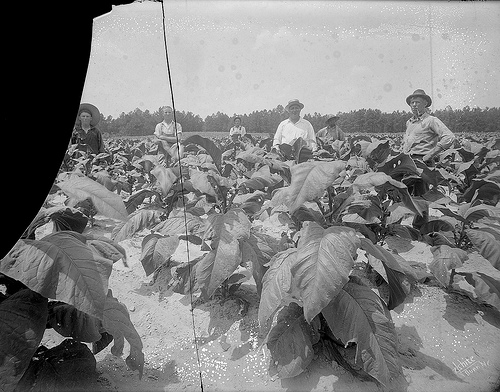 Hard times hit North Carolina’s farmers before the Great Depression of the 1930s even began. In the 1920s, North Carolina was still very much a rural state. Half of its total population lived on working farms. Agriculture was its largest industry. But farmers’ income had declined steadily during the decade because of overproduction of cash crops, falling crop prices, rising farm costs, poor conservation practices, and other problems. When the stock market crashed on “Black Tuesday”—October 29, 1929—the hopes and dreams of many farm families crashed along with it. “Many of our North Carolina farmers are desperately poor, live in wretched houses, and are scantily provided with even the necessities of life,” a sociologist from the University of North Carolina wrote in 1929. Throughout the next decade, both state and federal assistance would be needed to ease the plight of agriculture.

The biggest problems for North Carolina farmers resulted from growing too much cotton and tobacco, the state’s two main cash crops. (Farmers grow a cash crop for sale rather than for personal food or for feeding livestock.) During the 1920s, farmers produced more than buyers needed of these crops, creating a glut on the market. As a result, tobacco and cotton prices plummeted. The introduction of new man-made materials such as rayon, women’s new “flapper” dress styles that required less fabric, and increased competition from foreign textile mills combined to topple “King Cotton” from its throne in the 1920s. In North Carolina, cotton that had sold for more than 30 cents a pound in 1919 was selling for less than 6 cents in 1931. By that same year, prices for tobacco—which had surpassed cotton as the state’s new “king” crop—had dropped to just 9 cents a pound, compared to 86 cents in 1919. Many farmers received less for their crops than it cost to produce them. Less income meant farmers could not buy needed farm supplies, or even food and clothing for their families. They relied on banks and merchants for more and more credit. They sank deeper and deeper into debt.

To add to farmers’ woes, constant cultivation of cotton and tobacco had damaged soil, robbing it of nutrients needed for crops to grow well. Also, farmers who had tried to earn money by lumbering had stripped the forests of trees. This meant that rain washed deep gullies across the land. Such soil erosion left land unsuitable to grow other crops like grains and vegetables. As a result, North Carolina had to import some of its food during the 1930s, even though it remained a largely rural state with agriculture as its economic backbone.

Another problem facing Tar Heel farmers was the downside of farm mechanization, or replacing human and animal labor with machines. Technological advances made during World War I led to mass production of many new labor-saving devices during the 1920s and 1930s. Only wealthier farmers could buy these new motorized farm implements, like tractors and peanut pickers. Most farmers still plowed behind a mule and did much of their harvesting by hand. Still, the use of horses and mules as draft animals in the state declined a lot. While new machines made life easier for some farm families (and their animals), they eliminated the jobs of other farmworkers, called sharecroppers and tenant farmers.

Although they owned no land themselves, tenant farmers and sharecroppers felt the effect of farm failures. After the stock market crash, when some farm owners could no longer pay their mortgages or repay loans, banks foreclosed on them. Likewise, local governments seized and sold the property of farmers who couldn’t pay their taxes. When owners lost their farms, tenant farmers, who had rented land and living quarters from the owners, and sharecroppers, who had worked the land for a share of the crop, lost their homes and livelihoods, too. Many of these people gave up farming altogether. They moved to towns and cities to seek other jobs with more dependable wages. This migration from rural to urban areas during the 1930s began a trend of declining farm population that continues today. The number of farms in the state also began dwindling in the 1930s. The average farm size grew, however, as some bankrupt small farmers sold their lands to larger, more prosperous farmers.

Before the Great Depression, during previous periods of agricultural depression, North Carolina farmers had tried to improve things for themselves by forming organizations to promote and protect their interests. Such groups included the Patrons of Husbandry (whose local chapters were called “Granges”), the Farmers’ Alliance, and the Farmers Union. But all of these organizations ultimately failed. The scale and severity of the Great Depression demanded more assistance than farmers could provide on their own. Agriculture’s plight required the government—at both the state and federal levels—to help.

In North Carolina, that job initially fell on the shoulders of Governor O. Max Gardner (1929–1933). In his inaugural address, Gardner pledged to improve agricultural and rural life. Soon after taking office, he introduced the “Live-at-Home” program, which encouraged Tar Heels to grow more food crops for their families and livestock, and less cash crops for sale. Home demonstration agents working under the direction of North Carolina State College (now North Carolina State University) assisted the program by showing women across the state how to can and preserve food. Agricultural extension agents in every county taught farmers the benefits of crop rotation, deeper plowing, better seed selection, crop diversity, and the correct use of fertilizer. And the number of agricultural experiment stations, designed to give farmers up-to-date information about a variety of subjects, grew rapidly. Within two years, the amount of land devoted to cotton fell by 536,000 acres, and corn production increased by 10 million bushels.

When Governor J. C. B. Ehringhaus took office in 1933, the nation was in the depths of the Depression. That same year, Franklin Delano Roosevelt became president. Roosevelt quickly sent Congress a series of bills intended to provide relief, recovery, and reform for Americans. He called his radical economic program the New Deal.

The most important New Deal program for North Carolina was the Agricultural Adjustment Administration (AAA). Established by Congress in 1933, this farm-recovery effort paid farmers to reduce crop yields by leaving some land fallow (unplanted). The idea was that if farmers grew less of certain crops, a shortage would result. Farmers could then raise prices on those crops and make more money. The government placed acreage controls on cotton, tobacco, peanuts, and other crops. The plan worked for a while, and farm prices rose. But the government payments that farmers received, called a “subsidy,” came from a tax levied on food-processing industries. In 1936 that tax was declared unconstitutional, and the government abandoned the AAA program. Six weeks later, Congress passed a more effective farm-relief act. It authorized the government to pay farmers who planted fewer acres of soil-depleting crops, thus achieving the goal of crop reduction through soil conservation practices. By 1940, nearly 6 million farmers nationwide were receiving federal subsidies under this program.

Another New Deal program that helped a few financially strapped farmers was resettlement. The Resettlement Administration (RA), created by Congress in 1935, and other federal agencies moved selected farm families to federally planned, rural communities called “resettlement farms.” Penderlea Homestead Farms in Pender County and Roanoke Farms in Halifax County were two such projects in North Carolina. Settlers received land, a home, tools, and livestock for three years. During that time, they had to follow strict guidelines and make monthly payments. If they succeeded, they eventually gained title to the land and paid the rest of their loan over a 40-year period. “A good name and reputation of the whole family, the ability to work and the will to do it, those are the things that count most here,” said W. H. Robbins, Penderlea manager. In 1937 the Farm Security Administration (FSA) succeeded the Resettlement Administration. With even broader powers, it helped the nation’s poorest farmers secure low-interest loans to buy land; pay for farm equipment, seed, and livestock; and improve their homes. However, the FSA lost most of its funding by 1943.

Another New Deal program that helped farmers was the Civilian Conservation Corps (CCC). Established in March 1933, the CCC paid single young men $30 a month to work on various conservation projects. By 1936, North Carolina had 61 CCC camps housing thousands of young men. Dressed in olive-drab uniforms, they planted trees, built fences, and terraced hillsides to fight soil erosion; reclaimed eroded land; and helped get rid of crop pests, among other projects. A popular program, the CCC accomplished many projects of lasting value. The government shut it down in 1942, after the nation’s entry into World War II.

The Rural Electrification Administration (REA), yet another New Deal agency, greatly aided rural areas. It provided low-interest loans to farmers’ cooperatives to build power (and later telephone) lines in places where private power companies did not offer service. Established in May 1935, the REA brought electricity to many rural North Carolinians. This allowed farm families to enjoy electric lights and use many electric household appliances. It also let them use electric devices like water pumps and milking machines that made farmwork easier.

Other New Deal programs aimed at boosting agriculture. The Farm Credit Act helped farmers refinance loans at reduced interest rates. In 1935 the federal government established the Soil Conservation Service, which taught farmers how to reduce erosion. North Carolina also got involved in soil conservation efforts. The first Soil Conservation District in the United States was formed in Anson County in 1937.

New Deal programs had brought nearly $440 million to North Carolina by 1938. Most of these programs served the state well, rescuing Tar Heels from the degradation of the Depression and enabling numerous farmers to save their farms or—in the case of tenant farmers—acquire land of their own. While some New Deal programs ended when the economy improved, others like the REA and farm production limitations have continued to the present day. But none of them successfully ended the Great Depression. Only the nation’s industrialization as it prepared to enter World War II would accomplish that feat.

At the time of this article’s publication, RoAnn Bishop was the curator of agriculture, industry, and economic life at the North Carolina Museum of History.