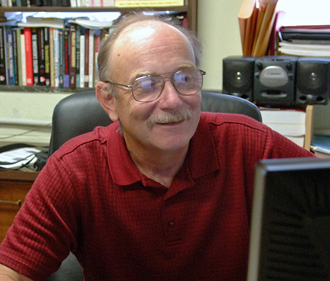 Dr. Mike Boyette remembers the kinds of problems that kept his tobacco-farming father up at night—worries ranging from storms and drought to insects and diseases. What he did not imagine as a child, though, was how much and how fast farming would change. And he had no idea of the role he would come to play in helping farmers like his father overcome problems in order to stay in business amid growing global competition.

During his twenty-three-year career on the faculty at North Carolina State University, Boyette—who grew up in Wendell, a small community near Raleigh—has developed complex storage methods and designed hundreds of cooling facilities across the state. These buildings have allowed growers to sell more of the sweet potatoes and other fruits and vegetables they harvest.

He has helped North Carolina farmers find ways to change their tobacco storage barns to reduce harmful chemical levels. He has developed a way of bundling tobacco into bales to make it easier to store, ship, and track. And, with energy costs on the rise, he has begun looking at the possibility of using cheap and abundant wood chips to fuel the barns used to cure tobacco.

Boyette is an agricultural engineer—essentially an inventor and designer who works to create better farm equipment, structures, and processes.

“In many ways a good engineer is an inventor,” Boyette says. “I tell my students that an engineer delights in making things, in solving problems. People are always looking for visionaries, but that’s not me. What I feel like I am is a problem solver.”

Boyette and the agricultural engineers and scientists he has worked beside have helped transform American farming in recent decades. They have developed better pest-control systems, improved crop varieties, new equipment, and other techniques that have greatly increased how much food can be produced per acre. In 1950 the average American producer fed twenty-seven others. Today that farmer feeds 130 people.

This greater efficiency has led to fewer farms and fewer farmers. Between 1950 and 2000, North Carolina lost 244,000 farms, but average farm size grew from ninety-one acres to 161 acres. Currently, the 8 percent of farms producing $250,000 or more in gross sales per year make up 87 percent of production. Most North Carolina farms remain small, part-time operations that provide people living in rural areas with a chance to add to their income.

But taken together, agriculture and agribusiness—including all food, fiber, and forestry industries—make up the state’s largest economic sector. They generate about $60 billion, or 20 percent, of the annual gross state product and about 20 percent of jobs. Over the past half century, North Carolina’s agricultural sector has shifted from relying heavily on tobacco to being highly diversified, with about ninety commodities. In fact, North Carolina is considered the third most agriculturally diverse state in the nation, behind California and Florida. Livestock and poultry products make up about 58 percent of total sales. And the green industry—plant nursery, greenhouse, Christmas tree, and turfgrass businesses—represents the fastest-growing part of the agriculture industry.

To keep North Carolina agriculture competitive during changing times, farm leaders believe that science and technology are very important. There is never a shortage of problems to solve, Boyette says. To develop workable solutions that can make a big difference, he looks to what he calls the three Cs of engineering: curiosity, creativity, and caution. “There is the thrill of the hunt for an elegant solution, and while it’s exciting, you always have to remember that lives depend on what we do,” he says. “So I always try to make sure that the solutions I’m working on are safe and practical.”

Staying in touch with farmers and having a farm background help, he says. Like many engineers and scientists his age, Boyette also was deeply influenced by the 1957 launch of the former Soviet Union’s Sputnik, the world’s first artificial satellite. Up until that point, science had not been taught in his school. But teachers soon dug up copies of The Work of Scientists, a book written in the 1930s. Boyette was hooked. “From that point on, I read everything I could about science,” he says.

And he began to broaden his horizons. “In my parents’ generation, their world was the farm. Neither has flown, and the world still remains today a small world to them. But I knew very early on the world was a big place, and I wanted to be part of it,” Boyette says.

In 1966 he arrived as a student at North Carolina State University—a place that seemed “very foreign” to the young farmboy. His parents dropped him off on the street behind Alexander residence hall. “I may as well have been on the moon,” he recalls. “I was lost. I had never been away from home.”

That year, Boyette was homesick and plagued by doubts about whether he could succeed in college. He dropped out after his freshman year and worked in a machine shop back home. He worked ten hours a day, six days a week, earning about $1.25 per hour.

A supervisor named Smitty took Boyette under his wing, and he began to thrive. He decided to try college again, starting at Wake Technical Community College for a year. Boyette earned a drafting degree and then returned to North Carolina State. He earned a bachelor’s degree there in 1976 and a master’s in 1986. In 1990 he earned the highest degree—a doctorate—a goal that he had set for himself in the fifth grade.

Since joining the university’s faculty in 1983, Boyette has traveled around the state and the world. His post-harvest cooling systems are used not only in the United States but in places as far away as New Zealand, Indonesia, and China.

During his career, Boyette has encountered both frustrations and successes. “A lot of things we do don’t work out,” he says. “It’s kind of like fishing. For sure, you won’t get a fish if you don’t drop a line in the water.”

At the time of this article’s publication, Dee Shore was head of the Department of Communication Services in North Carolina State University’s College of Agriculture and Life Sciences. She is the daughter of a former part-time tobacco farmer.