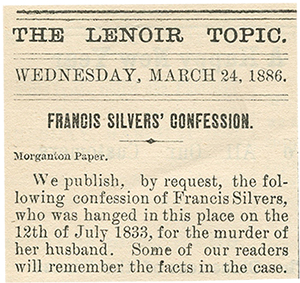 On 12 July 1833 an estimated 10,000 people crammed into a space behind the Burke County Courthouse in Morganton to see Frances "Frankie" Silver-described as a "bright-eyed, very pretty little woman" hanged for murdering her husband Charles. She is considered to have been the first white woman ever executed in North Carolina. Reportedly jealousy prompted Silver to decapitate her sleeping husband with an ax one night in their cabin on the Toe River in modern Mitchell County. Alfred Silver, half brother of the slain man, said years later that it had been hoped that Frankie would make a public confession before the execution, but that her father, Isaiah Stewart, shouted from the crowd, "Die with it in you, Frankie."

According to some authorities, Frankie Silver was a victim of poor legal advice and should have been acquitted. B. S. Gaither, the clerk of court at the trial, was quoted as saying there was evidence that Charles Silver was often physically abusive, and that if his wife had admitted the killing and pleaded self-defense she probably would have been found not guilty.

The story of Frankie Silver has become an enduring part of North Carolina folklore and the subject of numerous books, articles, and films.

1886: Reprint of "Frankie Silver's Confession". Image from The Lenoir Topic; Courtesy of the North Carolina Collection, Wilson Library, University of North Carolina at Chapel Hill. Available from http://www.lib.unc.edu/mss/exhibits/penalty/lenoir_topic.html (accessed May 21, 2012).

I think this is a good site .

I think this is a good site .