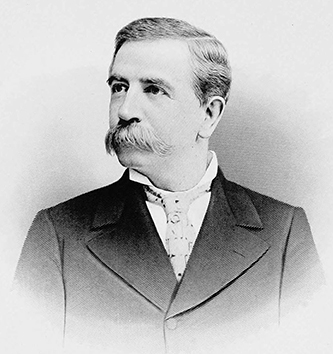 David Reid Murchison, merchant, civic leader, and Confederate officer, was born a few miles west of Fayetteville at Manchester, Cumberland County. He was the son of Duncan (20 May 1801–24 Apr. 1870) and Fannie Reid Murchison and the grandson of Kenneth McKenzie Murchison and Dr. Thomas Reid, both of whom emigrated from Scotland. He attended the University of Virginia but left in 1856 to join the firm of Bauman and Murchison in New York City as a bookkeeper. Returning to North Carolina in 1858, he became a partner in the firm of Eli Murray and Company in Wilmington.

At the outbreak of the Civil War, Murchison, as a private in the Wilmington Light Infantry, participated on 15 Apr. 1861 in the capture of Fort Caswell at the mouth of the Cape Fear River. A few months later, with R. B. McRae and T. H. McKoy, he raised a company of which he was first lieutenant. This company of 108 men was probably one of the largest from Wilmington. Assigned as Company C, Seventh Regiment, North Carolina State Troops, it saw action in the Seven Days' Battle around Richmond, Fredericksburg, Sharpsburg, Manassas, and other places. In April 1863 Murchison was transferred to the Fifty-fourth Regiment as captain and assistant quartermaster; later he became inspector general of the Commissary Department of North Carolina.

After the war he resumed his partnership with Eli Murray and the firm became Murray and Murchison. He soon left the firm and in July 1866, with John D. Williams, his brother-in-law George Williams, and his brother Kenneth McKenzie Murchison as partners, established the firms of Williams and Murchison in Wilmington, J. D. Williams and Company in Fayetteville, and Murchison and Company in New York. David Murchison was also a member of the first board of directors of the Bank of New Hanover, organized in 1872; receiver and later president of the Carolina Central Railroad Company; first president of the Produce Exchange; president of the Wilmington Compress and Warehouse Company; and president of the Express Steamboat Company, plying between Wilmington and Fayetteville. At his untimely death, the Wilmington Chamber of Commerce and the Produce Exchange suspended business and attended the funeral in a body.

With his brother Kenneth, Murchison gave the colonial parish church and graveyard of St. Philip's, Brunswick County, to the Episcopal Diocese of East Carolina. It is now a part of Brunswick town, a State Historic Site. They also owned the Caney River hunting preserve, which included Mount Mitchell.

On 11 Jan. 1872 he married Lucy Wooster Wright (30 June 1850–12 Oct. 1913), the daughter of Joshua Grainger and Mary Ann Walker Wright. They had one daughter, Lucile Wright, who married Walter Marvin. Mrs. Marvin gave the Murchison home on South Third Street, Wilmington, to the Episcopal Diocese of East Carolina; it is now the diocesan headquarters.

Murchison was a member of St. James's Episcopal Church. He died in New York City, where he had gone for medical treatment, and was buried in Oakdale Cemetery, Wilmington.