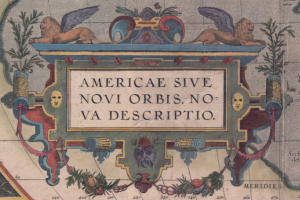 f North America in the 1500s. Before that time, the continent was an unknown place to them. These adventurers saw it as an entirely new land, with animals and plants to discover. They also met new people in this exciting New World—people with fascinating lifeways that the Europeans had never seen and languages they had never heard. This New World for Europeans was actually a very old world for the various people they met in North America. Today we call those people American Indians.

Archaeologists tell us that American Indians may have been on the North American continent for fifty thousand years. They were the first Americans, and they were great explorers, too. They didn't come to this continent all at once. It is thought that these ancient adventurers arrived at different times, over several thousands of years. They journeyed from Asia on foot or by boat. Their explorations took them through icy landscapes and along the coastlines. Eventually these earliest American explorers spread out over the entire continent.

Over time, their lives changed as they adapted to different environments. American Indians were creative. They found ways to live in deserts, in forests, along the oceans, and on the grassy prairies. Native peoples were great hunters and productive farmers. They built towns and traded over large distances with other tribes. These were the people the European explorers met when their ships landed in America.

As the English, French, and Spanish explorers came to North America, they brought tremendous changes to American Indian tribes. Europeans carried a hidden enemy to the Indians: new diseases. Native peoples of America had no immunity to the diseases that European explorers and colonists brought with them. Diseases such as smallpox, influenza, measles, and even chicken pox proved deadly to American Indians. Europeans were used to these diseases, but Indian people had no resistance to them. Sometimes the illnesses spread through direct contact with colonists. Other times, they were transmitted as Indians traded with one another. The result of this contact with European germs was horrible. Sometimes whole villages perished in a short time.

As early as 1585, English explorer Thomas Harriot observed how European visits to the small villages of coastal North Carolina Indians killed the Natives. He wrote:

Within a few days after our departure from every such [Indian] town, the people began to die very fast, and many in short space; in some towns about twenty, in some forty, in some sixty, & in one six score [6 x 20 = 120], which in truth was very many in respect of their numbers. . . . The disease was also so strange that they neither knew what it was nor how to cure it.

The introduction of European diseases to American Indians was an accident that no one expected. Neither the colonists nor the Indians had a good understanding of why this affected the Native people so badly.

The great impact of disease on the Native population of America is an important part of the story of European exploration. Experts believe that as much as 90 percent of the American Indian population may have died from illnesses introduced to America by Europeans. This means that only one in ten Natives survived this hidden enemy. Their descendants are the 2.5 million Indians who live in the United States today. 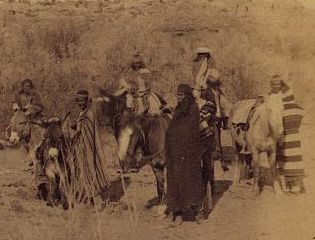 New trade goods represented another big change that European explorers and colonists brought to American Indians. Soon after meeting their European visitors, Indians became very interested in things that the colonists could provide. In a short time, the Indians began using these new materials and products in their everyday lives. Native hunters were eager to trade prepared deer hides and other pelts for lengths of colored cloth. Metal tools such as axes, hoes, and knives became valuable new resources. Soon American Indian men put aside their bows and arrows for European firearms, powder, and lead shot. Trade items like metal pots often were cut up and remade into new tools or weapons. The desire to get European goods changed ancient trading patterns. The tradition of simple hunting for food began to become less important than getting animal hides to trade. Soon American Indians depended on European items for daily needs. Colonial traders also brought rum, and this drink caused many problems for some tribes. New trade goods brought from across the Atlantic Ocean changed American Indian lives forever.

A third big change connected to this new trade was slavery. Europeans needed workers to help build houses and clear fields. They soon realized that they could offer trade goods like tools and weapons to certain American Indian tribes that would bring them other Indians captured in tribal wars. These captured Indians were bought and sold as slaves. You might think that Africans brought to America were the only enslaved people. It is surprising to learn that before 1700 in the Carolinas, one-fourth of all enslaved people were American Indian men, women, and children. Before 1700 the port city of Charleston shipped out many Native slaves to work in the Caribbean or to be sold in northern cities like Boston. Slavery led to warfare among tribes and to much hardship. Many tribes had to move to escape the slave trade, which destroyed some tribes completely. In time, the practice of enslaving Native peoples ended. However, it had greatly affected American Indians of the South and the Southwest.

Many big changes happened to the first Americans soon after Europeans met them. But Indian people survived diseases, huge shifts in their cultures, and even the destructive slave trade. North Carolina recognizes eight proud and enduring tribes today: the Eastern Band of Cherokee, Lumbee, Haliwa-Saponi, Sappony, Occaneechi Band of the Saponi Nation, Waccamaw-Siouan, Meherrin, and Coharie. They are now greatly outnumbered by the descendants of the European colonists, but their strong presence honors their distant ancestors—those earliest of American explorers.

This article is really

This article is really outdated in my opinion. How did Asians get here 50 thousand years ago before the African? Dr. David Imhotep tells us that the Mongolians arrived here 6 thousand years ago after the last ice age. There was a 2 mile high sheet of ice blocking pathways from Asia to America. But the African simply rode their canoes here which was a shorter distance and not blocked by ice.

Being a native American, i

Being a native American, i don't agree. In my tribe we have oral traditions that tell us we are created in North America. Our stories are older than the bearing sea land bridge theory. History archaeologist don't talk about

We know for a 100% fact that humans were created in Africa and migrated all across the globe. You are suggesting that humans were created separately in north america which does not match up with any archaeological records. On the contrary We can find multitudes upon multitudes of evidence that suggest humans migrated from Eurasia to North America. While there are some Native American tribes that have oral histories which suggest that people were created in North America this is not the case for all tribes, alot of them have storys about how they migrated from somewhere else (For an example "Turtle island" for the Ottawas or Aztlan for the Mexica). The cultures that do believe the creation of humanity happened in the America's most likely believe so because they have lived in the same land as long as they could remember so they assumed they had always lived there. Therefore these cultures would have created alternative explanation to why they got were they did.
Please note: I am not insulting your traditions I'm just pointing out that, like all oral traditions as time goes on story often become less facial as people might forget details, exaggerate certain aspects of a story or completely forget to pass on certain stories entirely. This can lead to muddyed version of actual historical events that while they are better than nothing oral histories should never be treated as fact especially after they been passed down through more then one or two generations. Generally, the older an oral history is the less factual and more exaggerated it becomes.

Yo this is sick

Yo this is sick

I was reading a history

I was reading a history textbook and tell me if I am right or wrong. The relationships between American Indians and the various European explorers differed. To prove this, European's had obtained immunity to diseases such as influenza, small pox (such on) unlike the Native Americans who did not. Europeans possessed of firearms, armor, and other resources not known to Native Americans.

Correct. My teacher told me

Correct. My teacher told me the same.

Nice page. helped me a lot.

Nice page. helped me a lot.

So glad to hear that!

So glad to hear that!

yoo lol i only used this for