The Archaeology of Early North Carolina

Most North Carolina citizens are familiar with the early English settlement of our state, as marked by the fabled “Lost Colony” in the late 1500s. The story is known because firsthand accounts of the earliest English efforts to settle here still exist. Historians, for example, use Thomas Hariot’s writings to describe English life on the coast more than 400 years ago. But what of the state’s earliest settlers—the American Indians—who had arrived more than 10,000 years earlier? No literary accounts of that story remain for historians to describe. Rather, the task largely falls to archaeologists. Archaeologists reconstruct the state’s unwritten history through carefully recovering and thoughtfully explaining the meaning of the material remains left behind by the state’s earliest residents.

Most archaeologists divide the state’s prehistory into four major time periods: Paleo-Indian, Archaic, Woodland, and Contact. (The Mississippian culture that became prominent in the Southeast influenced Indians in limited areas of North Carolina, overlapping the Late Woodland period.) The Paleo-Indian period is generally regarded as marking the earliest widespread presence of humans in North Carolina, or North America for that matter, between around 13,000 and 10,000 years ago. Exactly when humans first entered North America is the subject of much debate among archaeologists. The conventional view is that the first Americans walked from Asia to Alaska across a “land bridge” created by worldwide lower sea levels at the end of the last Ice Age. But recent finds in parts of eastern North America and even South America challenge this view. Some archaeologists believe that the peopling of North America may have happened several thousand years earlier than originally thought. These claims remain very controversial, however, and what they might mean for North Carolina is unclear.

In any case, the state’s first inhabitants, these early American Indians, likely arrived in what is now North Carolina from the north. They would have seen a much different landscape than we see today. Vast ice sheets covered a large portion of the northern continent. Although the ice sheets never touched North Carolina, their presence did influence the state’s environment. The weather, for instance, would have been cooler and drier than it is now. Significantly lower sea levels would have exposed much of what is now the continental shelf, extending the state’s shoreline several miles to the east. Rather than the oak and pine forest that dominates the region today, a mixed hardwood forest existed. Beech and hickory would have been most common, with a mix of other hardwood trees.

Archaeologists have found precious little evidence of Paleo-Indian settlement in North Carolina. In fact, no Paleo-Indian sites have ever been excavated in the state. The archaeological remains of this period occur mainly as an easily recognized form of stone spear point called a “fluted point.” Fluted points are finely flaked into a lance shape, usually three to five inches in length. A “flute” at the point’s base is its distinguishing characteristic. This flute forms a channel, or groove, that runs the length of the base. Such a flute probably served to thin the spear point, making it easier to attach to a spear shaft.

These artifacts are recovered in small numbers, mostly from the surface of plowed fields across the state. Similar spear points have been found across North America. In the Southwest, for example, archaeologists have recovered fluted points at sites dating roughly between 13,000 and 13,500 years old. Archaeologists believe these sites are former hunting locations, since fluted points have been recovered with the bones of now-extinct Ice Age mammals such as mammoth, mastodon, and bison. No such “kill sites” have been found in North Carolina. But the fluted points found here are much the same as those found at kill sites elsewhere, suggesting that Native groups lived in the state at the same time that Paleo-Indians were hunting Ice Age mammals elsewhere.

The rareness and context of fluted points provide limited information about prehistoric daily life during this remote period in North Carolina. But this is a common archaeological pattern across almost the entire Southeast. Some scholars suggest that Paleo-Indian folk moved across the landscape in such small groups and stayed in one place such a short time that they left little behind for archaeologists to find. We might imagine that they lived in small bands composed of a few families. These bands survived by hunting wild game and gathering plant foods. As hunter-gatherers, their way of life probably involved frequent group movements in search of food and other materials they needed.

Beyond this, what can be said about the Paleo-Indian period here? Some understanding of Paleo-Indian settlement comes from noting the distribution of fluted points across the state in both private and institutional collections. To date, I have recorded more than 250 points recovered from sixty-five counties. My analyses suggest that two point concentrations—or areas where the most fluted points have been found—cover the state. One covers the eastern Piedmont and inner Coastal Plain. A smaller concentration is located in the Mountains. These two areas are separated by a string of counties in the western Piedmont where no fluted points have been found. 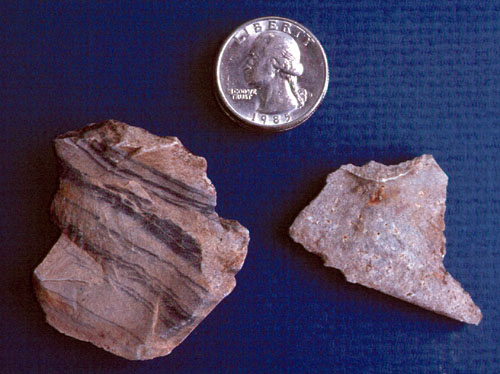 Studying the distribution of these points and the stone type from which they were made suggests that Paleo-Indian groups ranged over large portions of the state and adjacent regions. For instance, many points in the Piedmont/Coastal Plain concentration are made from a certain type of stone that geologists call rhyolite. While North Carolina contains many different stone types, rhyolite is one of the few rocks that can be worked by chipping away small pieces until a desired shape is achieved. This process took much work and skill, but it seems clear that Paleo-Indians looked for this stone to make tools. Archaeologists have discovered likely places (called quarries) where this special stone can be found in Stanly and Montgomery counties. Rhyolite fluted points have been found anywhere from a few miles to about one hundred miles away from these quarries. This fact suggests that Paleo-Indians likely carried points and other tools made from this stone as they hunted and gathered throughout the region. Such movement over large areas would not be unusual, given anthropological accounts of recent hunter-gatherers that cover hundreds of square miles every year. The distribution of points around these quarries may mean that Paleo-Indian settlement in what is now North Carolina required regular use of these stone resources. In fact, I interpret this concentration to represent a portion of a former Paleo-Indian settlement range. The Mountain point concentration probably represents a small portion of another settlement range related to stone sources in Tennessee.

The Paleo-Indian period remains the least understood of any prehistoric period in the state. Much more archaeology needs to be done. After the end of the Ice Age, modern climate conditions emerged that brought an end to the Paleo-Indian period. Modern plant and animal communities appeared, and sea levels rose nearer their present levels.

Native North Carolinians adapted too. Over the next 10,000 years, significant changes occurred in Indian cultures. Indians began to adopt pottery. Farming and settled communities largely replaced hunting and gathering. Such was the case when Thomas Hariot arrived on the North Carolina coast—more than 10,000 years after the first inhabitants.

At the time of the publication of this article, Dr. I. Randolph Daniel Jr. was an associate professor in the Department of Anthropology at East Carolina University. His research interests include the archaeology of the earliest North Carolinians.

Projectile points of the N.C. Piedmont. From: A Review of Archaeology in the North Carolina Piedmont: A Study of Change, by H. Trawick Ward. In The Prehistory of North Carolina: An Archaeological Symposium, edited by Mark A. Mathis and Jeffrey J. Crow. NC Division of Archives and History, Raleigh. 1983.