"You Can’t Miss It: Roadside Fun"

Next time you travel, be on the lookout for the following sites that help make our state’s landscape so unique. 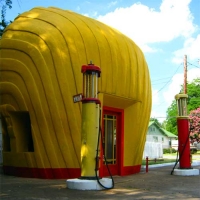 Quality Oil Company built eight clamshell-shaped gas stations around Winston-Salem in the 1930s. Officials designed the bright yellow and red buildings to highlight the company’s Shell Oil products. Today only one remains standing. Restored in 1997, it houses a satellite office for Preservation North Carolina. The building is the only individual service station listed on the National Register of Historic Places.

High Point, internationally known as the “Home Furnishings Capital of the World,” is also home to some pretty big furniture celebrating that industry’s Tar Heel heritage. In the 1920s the High Point Chamber of Commerce built a giant chest of drawers to serve as a “bureau of information.” The thirty-eight-foot-high building was home to the High Point Jaycees for many years. In the 1990s the chest of drawers got a new look. Two huge socks, representing the area’s textile industry, were added, hanging out of a partially open drawer.

What at first glance appears to be proof of an alien invasion was originally meant to be the modern house of tomorrow. Finnish architect Matti Suuronen designed the first experimental plastic Futuro house in 1968 as a friend’s vacation home. Created to be easily moved and set up, Futuro houses were eleven feet high and twenty-six feet round. They had a hatch door with steps that lowered to allow entry. Inside each were bed-and-chair combinations, a fireplace, a small kitchen, and a bathroom. But rising plastic prices made Futuro homes too expensive for mass production. Only a hundred or so were built between 1968 and 1978. Even fewer remain today. The one in Frisco at one time was a diner.

On a trip to Maryland in 1963, Rose Hill feed company owner Dennis Ramsey met a group of poultry producers who boasted of having the world’s largest frying pan. Their pan was ten feet in diameter. Ramsey decided his hometown needed an even bigger pan for local events and festivals. So he had his employees build one. Six months later they unveiled a two-ton frying pan, fifteen feet in diameter with a six-foot handle. The pan, which today sits beneath a special shelter, was made of quarter-inch steel, with eight pie-shaped wedges so it could be moved easily. Forty gas burners fired the pan, which could fry (and still does on occasion) 365 chickens at once! 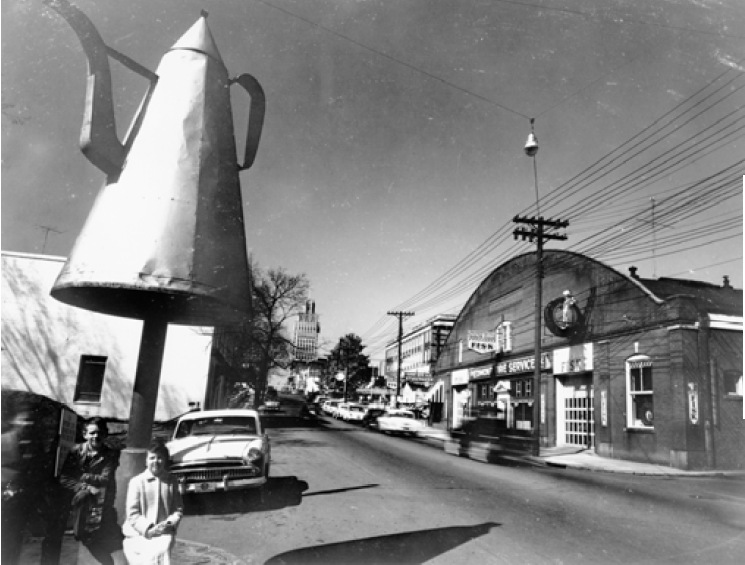 In 1853 Julius Mickey opened a tinsmith shop in Salem. Mickey’s tinware proved very popular. But some customers complained that they could not find his shop. Mickey’s solution? He built and mounted a 740-gallon tin coffeepot on a post outside his Main Street building. The huge coffeepot quickly became a community symbol. Today it remains a source of civic pride.

Built in 1922 by the Thomasville Chair Company to call attention to the town’s main industry, the original wooden version of the famous chair began to decay during the 1930s. Construction of a more durable steel-and-concrete replacement began in 1951. The current eighteen-foot-high chair sits on a twelve-foot base and is patterned after the work of Duncan Phyfe, a famous American furniture maker of the 1700s. The chair has hosted a number of famous visitors, including vice-presidential hopeful Lyndon Baines Johnson during his 1960 whistle-stop campaign.

At the time the article was written, Mandy Foss was the librarian at the North Carolina Museum of History.

Image Credit
Highway construction at the Salem coffeepot, March 1956, in an image from the Forsyth County Public Library.  Image courtesy of the State Archives, North Carolina Office of Archives and History.