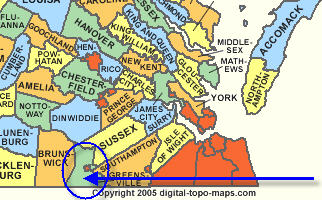 Many students of history know about the career of Thomas Day, a free African American who, by 1850, had built North Carolina’s largest cabinetmaking shop in Milton, Caswell County. Day designed and handcrafted furniture and architectural elements for the white elite of the Dan River region. Cabinetmakers rarely work alone, and Day operated a shop unlike any other in the state. He employed white, black, and mixed-race woodworkers of all ages. What many people do not realize is that some of the men that he worked and socialized with came from the American Indian community.

Before the Civil War in the 1860s, white society viewed American Indians as “people of color.” Many—those who had intermarried with African Americans and whites—are listed in official records as “mulatto,” meaning that they were of “mixed race.” For many years, Indians enjoyed the same legal rights as free blacks. In 1835 the new state constitution took away voting rights from people of color, including Indians, regardless of whether they had intermarried with other races. Free people of color had to follow many of the same restrictions placed upon slaves. However, they could buy and sell property.

Day—who was born in 1801 in Greensville County, Virginia, to mixed-race parents, John and Mourning Day—moved with his family to Warren County, North Carolina, in 1817. When he moved to Hillsborough in the early 1820s, it appears that he became friends with members of the Jeffreys family who, although listed as “mulattos” in official records, were actually of Indian origin. The Jeffreys were part of a larger group of Occaneechi people from Virginia who had settled in the northwest section of Orange County, which became Alamance County in 1849. As with the Day family, the Jeffreys family had originated in Greensville County, Virginia. In 1830 Uriah Jeffreys served as a bondsman for Thomas Day when he married Aquilla Wilson. A bondsman was usually a close family member (such as a father, brother, or uncle) who assured the court that the couple should be married, and that the groom would not change his mind and leave the bride at the altar. Uriah Jeffreys must have been a close friend of Thomas to agree to be his bondsman. Historic records make it clear that both men were cabinetmakers, and it is possible that Uriah and his brother Nathan worked with Day for a short time. In 1828 Uriah decided to move. He advertised in the Hillsborough Recorder that he had a variety of furniture from his cabinetmaking business for sale, including “Bureaus, Bedsteads, Tables.”

Uriah moved to Ohio with two of his brothers, Parker and Augustus. Unfortunately, they experienced the same type of prejudice in the North that they had tried to leave behind. The law required free blacks entering Ohio to pay a bond of $500 to county officials. Whites thought this would guarantee that only free blacks of “good character” would settle and be able to support themselves. Parker Jeffreys refused to pay, insisting that his blood was a mixture of Indian and white, and not black. The case went to the county court, where he lost. Jeffreys persevered, and the Ohio Supreme Court heard his case in 1842. In Parker Jeffreys v. Ankeny et al., the supreme court justices ruled that he was an Indian with no African ancestry and did not have to pay the bond. Members of the Jeffreys family continued to make furniture near Xenia, Ohio, well into the twentieth century.

Nathan Jeffreys lived the rest of his life in North Carolina. It seems that he continued to work as a journeyman cabinetmaker, because in 1834 he is listed as such in a court document. However, in the 1850 and 1860 censuses, he is listed as a farmer owning $500 in property. Many cabinetmakers supplemented their incomes by farming. Day clearly considered Nathan a close family friend, because in 1851 in a letter to his own daughter, Mary Ann, he mentions the death of Nathan’s daughter, Safroney.

Fine furniture made by Nathan Jeffreys between 1845 and 1855 is known to exist in a private collection. The construction techniques that he used are similar to those found on the bureaus made in Day’s Milton shop, indicating that the two men probably worked together at one time. Jeffreys and other members of the Indian community passed on their woodworking skills. His great-great-grandson, William Bill Jeffries, learned woodworking from his father. He built houses as well as chairs during most of the twentieth century.

At the time of the publication of this article, Patricia Phillips Marshall was the curator of furnishings and decorative arts at the N.C. Museum of History and the coauthor of a book on Thomas Day. She notes that current descendants of the Jeffreys family spell their names as “Jeffries,” but she uses “Jeffreys” because that is how the name appears in the historical record. She thanks Forest Hazel for sharing his research on the family.