Originally published as "Take Your Pick of North Carolina Apples" 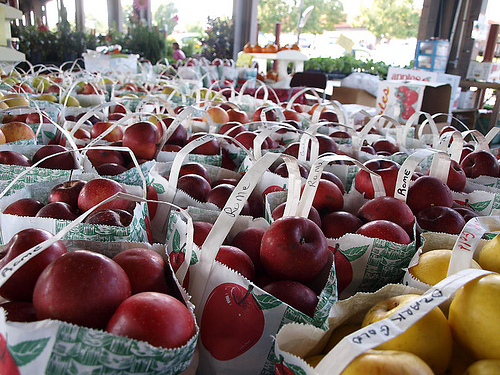 Since shortly after European colonists began settling down in present-day North Carolina in the 1600s and 1700s, apples have grown in the Old North State. Apples are not native to the area, but they grew well from the seeds and saplings that the settlers brought with them. Although people planted apple trees all over the state, they grew best in the Mountains and foothills. The cool temperatures and fertile soil there provided perfect growing conditions. Even now, most North Carolina apples grow in the western part of the state, especially in Henderson, Wilkes, Alexander, Cleveland, Lincoln, and Haywood counties.

Early North Carolinians grew apples for their families to use, not to sell. They ate some apples and fed some to their animals. They pressed most of the crop for the juice needed to make cider and vinegar. Both were very important. Cider kept well for a long time, though there was no refrigeration. It was safe to drink when people could not find clean water. Settlers used vinegar to help preserve the food they needed to survive the winter.

Over time, farmers began growing enough apples to have plenty to sell. Wealthy landowners had large orchards with thousands of trees. Even small farmers usually had between 50 and 250 trees. As the apple farms continued to grow, so did their production and distribution. At first, growers took apples only to nearby towns, by horse and wagon. After railroads developed in the late 1800s, growers could ship more apples by train over longer distances. By the time refrigerated trucks and railcars came along, growers could send their apples almost anywhere.

North Carolina became an important source for apples for all of the United States. In recent years, the number of small family-owned orchards has decreased, but around three hundred larger commercial orchards remain in operation. These orchards cover nearly fourteen thousand acres and produce around eight million bushels of apples a year. At least 60 percent of those apples are sold to factories, which turn them into juice and applesauce. Most of the other apples are sold fresh to large grocery stores. Only a few thousand bushels are sold directly to the public, in places like roadside stands and farmers markets.

At one time, more than fifteen hundred kinds of apples grew in the South. Orchards contained a variety of trees, because people used different apples in different ways. Some varieties were best for eating raw, some were more suited for cooking or drying, and others made the most juice. But unlike family orchards and small farms that needed a variety of apples for assorted uses, commercial orchards grew only the apples that sold at the highest price.

In the past few decades, most commercial orchards have produced four varieties: Red Delicious, Golden Delicious, Rome Beauty, and Stayman. Because of the concentration on those four types, many of the apples that used to grow in North Carolina have become threatened or extinct, which means that they no longer exist. Because extinct plants are as serious a loss to the environment as extinct animals, a few concerned people are working hard to preserve old varieties. These old varieties are called heirloom, or antique, apples. More information about apple varieties grown in North Carolina may be found at the NC Department of Agriculture Web site.

People who study and preserve heirloom apples could be called apple historians. Their goal is to find, protect, and preserve the few remaining heirloom apple trees still growing in North Carolina. When an apple historian discovers an heirloom tree, he or she safely collects a small cutting that can be used to grow more trees. Because more than one type of apple can be grafted onto the rootstock of a single tree, it is possible to grow several varieties in a small space. Over time, a tree collection becomes a “living museum,” where many types of heirloom apples can grow in a safe, well-maintained orchard. This is very much like the work done by zoos to protect endangered animal species.

Although one expert estimates that we have lost around thirteen hundred varieties of Old South apples, there is good news. In the past twenty years, people have found more than one hundred kinds of apples thought to be extinct growing in our state. Some of these apple trees were found on large pieces of land that were once farmed but now sit idle. Others were found around old, abandoned homes. Some were found in cemeteries unused for decades. Because those places had remained undisturbed for a long time, the old apple trees survived.

Most heirloom apples do not look like the shiny, uniform, brightly colored apples we see in grocery stores. Some have odd, uneven shapes, or rough and spotted skin. People prized these apples for their flavor and how they could use them, not how they looked. They used the apples near the orchard where they grew, so it did not matter how well the fruit shipped to other places. Names of heirloom apples often hint about their appearance or where they grew. Here are a few examples: Limbertwig, Yellow Transparent, Arkansas Black, Red Astrechan, Ginger Gold, Crow's Egg, Grimes Golden, Hoover, Ben Davis, and Kinnaird’s Choice.

Although most heirloom apple collections are kept on private land, one is open to the public. Since 1997, Horne Creek Living Historical Farm has been the home of the Southern Heritage Apple Orchard. Its collection will someday contain well over four hundred kinds of apples. This state historic site is located in Pinnacle, a small town north of Winston-Salem.

Visitors can take part in daily activities and special events of old-time farm life. They can see, smell, touch, and hear things once common in rural North Carolina. Taking a trip to the farm is a great way to learn about the state’s past.

North Carolina’s commercial orchards face stiff competition from apples imported from foreign countries, particularly China. People are realizing the value of heirloom apples, and some small orchards are growing more of the fruit. Growers usually can sell heirloom apples at a higher profit because they are unique. Also, most heirloom apples are sold directly to people as soon as they are picked, so there are few transportation and storage costs. If a variety does very well, the grower can sell grafts or saplings to plant nurseries or to the public. These steps might help smaller orchards stay in business and continue to be an important part of North Carolina's farm income. The efforts may also make it possible for more people to taste and enjoy these delicious, time-honored apples.

At the time of this article’s publication, Sheri Castle was a professional culinary instructor and writer living in Chapel Hill. She grew up in Boone and was a member of the Southern Foodways Alliance.