A Conversation with Artist Joel Queen 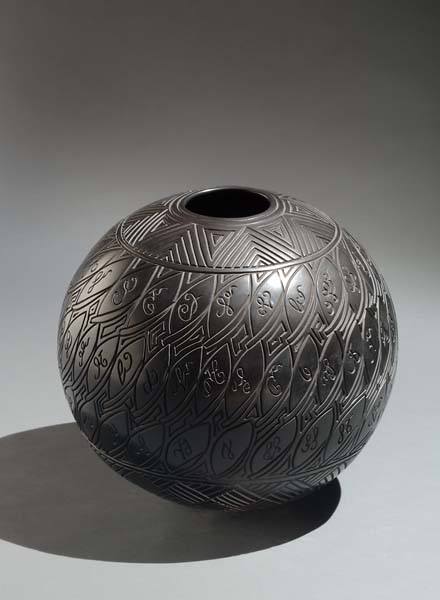 When most people look at a lump of clay or a piece of walnut, they see just that—a simple, unmoving object. Joel Queen, though, looks at such raw material and sees something waiting to be turned into a long-lasting thing of beauty.

“For me, there’s fascination to see a blank piece come into being something else, to know you did that,” Queen said. “It is a thrill to get to walk into a gallery and see people looking at my work and saying ‘This is good.’ Of course, I also can hear valid criticism, which I try to learn from.”

The thirty-eight-year-old Queen is an enrolled member of the Eastern Band of Cherokee, who, after a lifetime of interest in arts and crafts, has worked full-time as an artist for about four years. In January 2005, he opened his own gallery outside the town of Cherokee, showing and selling work that includes traditional Cherokee pottery, black pots, raku, wood and stone sculpture, and more. Members of Queen’s family, including his great-grandmother Ethel Bigmeat, had been potters for eight generations before he took up that art. The family also has a tradition of basketweaving. Growing up on the Qualla Boundary—about 57,000 acres in western North Carolina held in trust for his tribe by the federal government—Queen was creating something most of the time.

“I never found a medium that I couldn’t work in. Every time somebody introduced something to me, I’d take off with it for a while,” he said.

During his years at Cherokee High School, he became inspired to use different materials—silver, paint, pottery, and even leather—to keep from getting bored with art. In the 1980s, while working as a lecturer at Oconaluftee Indian Village—the re-creation of a 1700s Cherokee settlement visited by many tourists—Queen spent some time with older wood-carvers. They sparked an interest in carving.

“One of them gave me a piece of stone, and I took it home and knocked out a piece, which I think I sold for $250 or so. I was hooked,” Queen said.

Still, it took years to travel the road to full-time artist. Queen worked in fields such as construction and printing, creating art on the side. He briefly opened a gallery in the late 1980s, but he was not old or wise enough then to make it work, he says now. Earlier this year, after taking college classes periodically, he completed a bachelor of fine arts degree at Western Carolina University. Today, having different artistic interests helps Queen to earn enough money to live on.

Many people have come to know him for his traditional Cherokee pottery. What is “traditional”? Not the commonly seen wedding vases. Those are a fairly modern idea, in Queen’s opinion. For centuries, the Cherokee created pottery for practical uses: grain or water storage vessels, cooking pots, bear-fat lamps, medicine bowls, and funeral urns. They added designs by stamping pieces with carved wooden paddles or other natural objects. By the late 1800s, however, with less need to use pottery except as decoration, and influenced by other American Indians and Europeans, many potters changed their work in order to sell items to outsiders.

“To me, ‘traditional’ means it has to be handbuilt, with no electricity, no wheel—using the coil method and so forth—and fired in an open pit. You can learn the basics pretty quickly, but firing can take a lifetime to learn,” Queen said. “It means using clay that I’ve dug and screened. Old-style Qualla pottery means thin-walled vessels with stamping, engraving, and usually folded-down rims. I’m pretty strict in my views of what traditional Cherokee pottery is—it’s something done 250, 300, or 3,000 years ago.”

He adds, “To see a fire with a traditional pot in it being fired, it’s frustrating, it’s exciting, and it’s a very hot job. On average, I can get a pot up to 1,300 degrees, and it can take a good eight hours to fire a nice pot, although it can be quite dependent on the weather and a lot of idiosyncrasies. Every time I do that, it’s a challenge that still keeps me on my toes.”

Queen’s recent work includes wooden sculptures, with simple, flowing lines, of women from one of the seven Cherokee clans, the Long Hair Clan. He also made some extremely large Overhill-style pots, of a type that may not have been seen for some 200 years, for a traveling exhibit that opened this autumn at the Museum of the Cherokee Indian. The exhibit—Emissaries of Peace: The 1762 Cherokee and British Delegations—contrasts cultural perspectives of the eighteenth-century Cherokee and British through the eyes of Lieutenant Henry Timberlake, who visited the Overhill region, and three Cherokee leaders, who visited London. When Europeans arrived in what is now North Carolina, the Cherokee lived in parts of eight current states, roughly divided into three regions that included the Overhill area of eastern Tennessee and western North Carolina.

Often, Queen spends sixteen hours a day on art. In addition to using different media, or materials, he likes to experiment with things such as metallic glazes for raku. (The raku process involves firing pottery at a relatively low temperature, and then moving it while hot to a closed container with materials that will ignite and cause a reaction. This creates surface colors and patterns.) A key to his traditional pottery is patience—something he needed to develop over the years. He may work on a piece for two weeks, so he must pace himself to avoid losing concentration and making mistakes. His three children are interested in pottery but still learning that kind of patience. (Queen’s wife, Kelly, runs the business side of his gallery, so art continues to be a family affair.) Queen has been part of the Cherokee Potters Guild, a group trying to preserve traditional ways. He doesdemonstrations and lectures, and sometimes teaches art to individuals.

He is proud to have his art displayed at places such as the Smithsonian Institution, in Washington, D.C.; the British Museum, in London; and Monticello, the Virginia home of President Thomas Jefferson. In 2002 he made two soapstone sculptures for a Monticello exhibition marking the two hundredth anniversary of the Lewis and Clark Expedition. The show was designed to look like Jefferson’s Indian Hall circa 1807–1809, when the president displayed Indian and natural history objects sent or brought back by members of that expedition. In his sculptures, now part of the permanent Monticello collection, Queen re-created burial figures found in an American Indian grave in the 1800s in Tennessee. The originals date to about 1400–1600. The project helped to establish Queen as a serious artist.

“To see my work displayed at a place with that much prestige was just unbelievable. It was like, ‘I can really do this.’ It has spiraled since then,” he said.

At the time of the publication of this article, Lisa Coston Hall was a historical publications editor at the N.C. Museum of History. She edited the Tar Heel Junior
Historian and other materials.