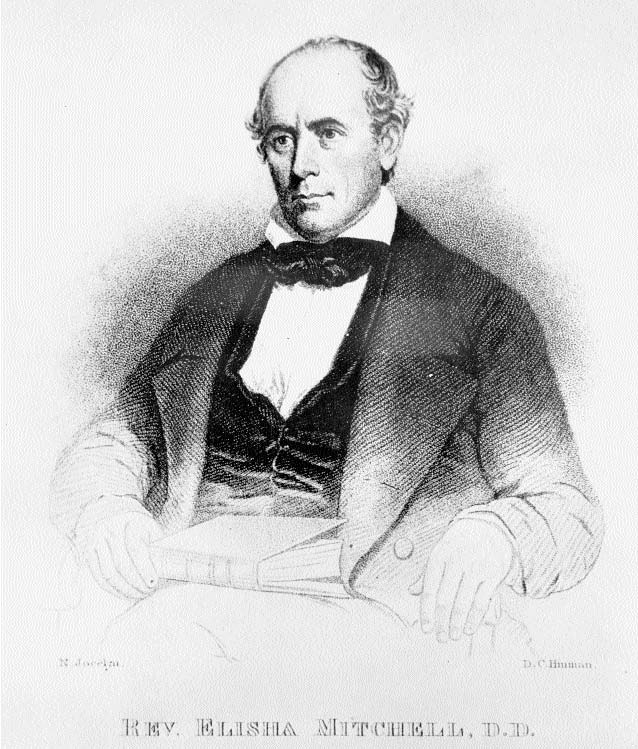 Elisha Mitchell, one of North Carolina’s great scholars, observed that a mountain in the Black Mountain Range in western North Carolina seemed higher than the state’s Grandfather Mountain and higher than Mount Washington in New Hampshire’s White Mountain Range. At that time, Grandfather Mountain was thought to be the highest peak in the region. Mount Washington was considered the highest peak in the eastern United States. Mitchell collected evidence to support his hypothesis over the next thirty years, until the project claimed his life. His work revealed that the highest peak east of the Mississippi River was indeed in Yancey County.

Mitchell was born August 19, 1793, in Washington, Connecticut. Throughout his life, he was an educator, geologist, Presbyterian minister, and explorer. After graduating from Yale University, he began teaching at the University of North Carolina at Chapel Hill in 1818. He taught chemistry, geology, and mineralogy for thirty-two years. Over his lifetime, he created a personal library of more than nineteen hundred books.

While working on a geological survey of North Carolina in 1828, Mitchell noted the height of the Black Mountains. He was certain that his observations had correctly identified the highest point in the eastern United States. He returned to the Black Mountain Range in 1835 and again in 1838, collecting data to support his lofty hypothesis. In 1844 Mitchell made what he planned to be his last trip to the Black Mountains. On July 5, 1844, he wrote his wife: “Tomorrow, I am expecting to ascend the Black Mountains I hope for the last time. I shall probably now reach the highest summit.” On July 14 Mitchell reported to his wife in another letter that his ascent on July 8 had been the “hardest day’s work I have ever performed.”

Climbing mountains, not to mention traveling, at the time was no easy task. Mitchell traveled by means of a one-horse wagon from Chapel Hill to Morganton, and the trip took about one week. Steep terrain and dense undergrowth often prevented horses from climbing the mountains. Sometimes Mitchell had to ascend rugged areas on his hands and knees. The only trails that existed were animal trails, and he used a bear trail on one of his trips. In one day a mountain-climbing round trip measured eighteen to twenty-nine miles. In addition to food, water, and other necessary supplies for survival, Mitchell carried with him fragile barometric equipment.

He used barometric observations to calculate the elevation of mountain summits in western North Carolina. A barometer is an instrument used to measure pressure in the atmosphere. The mercurial barometer consists of a glass tube sealed at one end and filled with pure mercury. After being heated to expel the air, the tube is turned upside down in a small cup of mercury called the cistern. The mercury in the tube sinks slightly, creating a vacuum above it. Atmospheric pressure on the surface of the mercury in the cistern supports the column of mercury in the tube. That column varies in height with variations in atmospheric pressure and changes in elevation. It would generally decrease with an increase in height above sea level.

During his 1835 trip to the Black Mountains, Mitchell established Morganton as a base station and made several barometric observations over a short period. While he took readings on the mountain summits, someone else took barometric readings in Morganton at about the same times. Using a complex math formula, the difference between the sets of readings could be used to estimate the heights of the mountaintops. Mitchell thought that the height of what he believed to be the highest peak was 6,672 feet—a mere twelve feet under modern calculations. 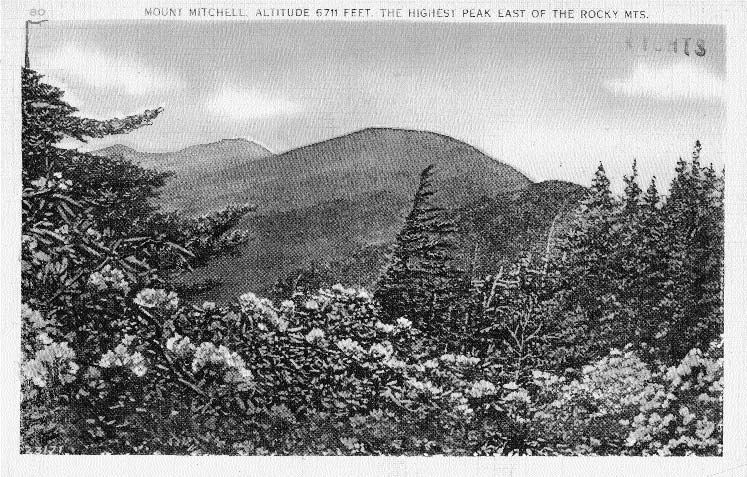 Everyone did not agree with Mitchell’s claim that he had identified the highest point in North America east of the Mississippi River. In 1855 Thomas Clingman—a state senator and a former student of Mitchell’s at the University of North Carolina at Chapel Hill— climbed and measured a peak he claimed was the highest, a peak he said that Mitchell had not climbed. Over the next two years, Clingman and Mitchell argued through local newspapers. Finally, Mitchell decided to make another trip to the Black Mountains. On Saturday, June 27, 1857, he set off on foot to contact some of his former guides. He never returned. A week later, after no sign of Mitchell, search parties formed. Zebulon Baird Vance—a native of Buncombe County, a political opponent of Clingman who later would become governor, and a friend of the Mitchell family—helped direct the search. After three days, searchers found footprints leading to a creek and waterfall. Mitchell’s body was in the pool of water at the base of the waterfall. It was determined that he slipped and fell, was knocked unconscious, and drowned. Mitchell was buried first in Asheville. A year later he was reburied on the Black Mountain peak that is now known as Mount Mitchell.

In 1881–1882 the U.S. Geological Survey upheld Mitchell’s measurement of the highest peak on the Black Mountain Range and officially named it after him. By the early 1900s, extensive logging had stripped much of the mountain range, and citizens became alarmed at how fast the forests were disappearing. In 1915 a bill was introduced in the state legislature that would establish Mount Mitchell as the first state park. It passed both houses, and on March 3, 1915, the North Carolina State Parks System began. Today visitors to Mount Mitchell State Park, thirty-five miles northeast of downtown Asheville, enjoy an exhibit hall and a 360-degree view from the observation tower.

Mitchell’s pioneering spirit and sense of adventure inspired others to produce accurate written and graphic descriptions of the Black Mountain Range. The range soon transformed from a little-explored wilderness to an area of well-refined geographic knowledge and plans for toll roads to its summit to improve visitor access. The modern calculation of Mount Mitchell’s elevation is 6,684 feet. It remains the highest point east of the Mississippi River.

*At the time of this article’s publication, Suzanne Mewborn served as program coordinator for the Tar Heel Junior Historian Association at the North Carolina Museum of History.

Mount Mitchell & the Black Mountains: An Environmental History of the Highest Peaks in Eastern America by Timothy Silver.