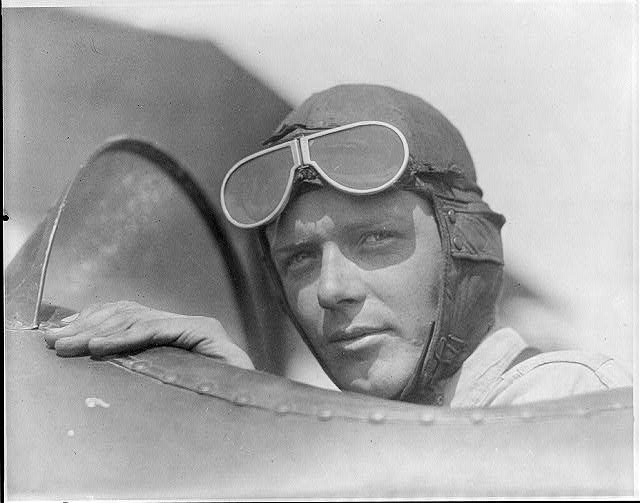 Before Charles Lindbergh made the first solo, nonstop flight across the Atlantic Ocean in May 1927, most Americans—including many North Carolinians—thought it too dangerous to travel by airplane. Two United States Army pilots had made a nonstop transcontinental flight in 1923, and navy commander Richard Byrd had flown over the North Pole in 1926. But the average citizen in 1927 still preferred to do his or her traveling by car, ship, or train.

Lindbergh’s flight changed that. When the twenty-five-year-old former airmail pilot safely landed his plane, the Spirit of St. Louis, at Le Bourget Field near Paris, France, after a 33½-hour flight from Long Island, New York, on May 20–21, 1927, Americans gained a new confidence in air travel. Suddenly, everybody wanted to fly. In 1929 more than 170,000 paying passengers boarded United States airliners—nearly three times the 60,000 that had flown the previous year. Almost 3 million more—most of them businesspeople—traveled in private planes in 1929. Even Mickey Mouse took to the air, mimicking Lindbergh’s flight in the 1928 Walt Disney cartoon Plane Crazy.

Because of Lindbergh’s flight, aviation stocks soared. For a short time, even the stock of a small eastern company called Seaboard Airline saw activity—until it was discovered that the corporation was actually a railroad. As financial investors came forward, more and more fledgling airlines began to emerge. By the end of the 1920s, there were forty-four scheduled United States airlines, and many nonscheduled ones. Commercial airplanes began serving Raleigh in September 1929. One line flew passengers to New York, and another offered service to Charlotte and Atlanta. A Richmond, Virginia-to-Atlanta flight soon began making stops in Greensboro and Charlotte, and one from Richmond to Jacksonville, Florida, made stops in Raleigh.

After his transatlantic flight, Charles Lindbergh used his fame to promote the development of aviation. At the request of the Guggenheim Fund for the Promotion of Aeronautics, Lindbergh toured the United States in the Spirit of St. Louis during the summer and fall of 1927. Traveling a total of 22,350 miles, he visited seventy-five cities and dropped messages over towns where he couldn’t stop. In North Carolina, Lindbergh visited Greensboro and Winston-Salem on October 14–15, 1927, and dropped messages over Salisbury and Lexington. 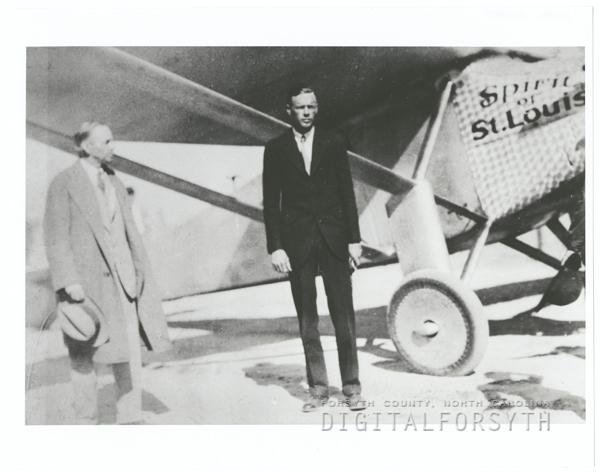 To prepare for Lindbergh’s visits, cities across the nation groomed their airports, and those without facilities built them. Greensboro’s Lindley Field, later to become the Piedmont Triad International Airport, was dedicated in May 1927, just five months before Lindbergh landed there. Regular airmail service began at the airport the following year, and regular commercial air passenger service from Greensboro to Washington, D.C., started in 1930. Inspired by Lindbergh and local aviation pioneers Dick and Zachary Smith Reynolds, Winston-Salem also began its airport in 1927. Clint Miller gave the materials, grading work, and his name to Miller Municipal Airport, which Lindbergh helped to dedicate during his visit to the city. The airport would later be renamed Smith Reynolds Airport in memory of Z. Smith Reynolds, who became the nation’s youngest licensed pilot at age nineteen and died at the age of twenty-one.

Among the crowd listening to Lindbergh’s speech at the dedication of Miller Municipal Airport in 1927 was nine-year-old Thomas H. “Tom” Davis. Inspired by Lindbergh’s words, Davis decided to pursue a career in aviation. He earned his pilot’s license at age sixteen and founded Piedmont Airlines in 1947, at the age of twenty-nine. The North Carolina–based airline became the nation’s seventh largest before merging with USAir in the late 1980s.

While young Davis was listening to Lindbergh in Winston-Salem, another nine-year-old boy, Robert Morgan of Asheville, was following Lindbergh’s national tour in the newspapers and clipping articles about it to keep in his scrapbook. During World War II, Morgan became the pilot of the famous Memphis Belle, the first B-17 bomber to complete twenty-five missions over Europe—and without losing any crew members.

Another North Carolinian, William A. “Bill” Winston of Wendell, became a minor celebrity after Lindbergh’s flight, when the media learned that he was the Army Air Service sergeant who had given Lindbergh his first “official” flying lessons, at Brooks Field in Texas in 1924. Lindbergh even wrote about Winston in WE, the 1927 autobiographical book about his famous flight. Winston later became a master pilot for Pan American World Airways and was one of the first American pilots to make more than a hundred transatlantic flights.

Immediately after Lindbergh’s transatlantic flight, newspapers began comparing it to the Wright brothers’ first flight at Kill Devil Hill in 1903. The attention sparked an effort to establish a national memorial to the brothers. Secretary of the Navy Josephus Daniels, a North Carolinian, had first raised the issue in 1913. Fourteen years later, Congress passed a bill authorizing the Wright memorial. Orville Wright was present at the laying of the cornerstone in 1928, but Lindbergh was not. The young aviator had been invited to attend the ceremony but reportedly declined at the last minute, not wanting to detract any attention from Orville and his accomplishment.

Lindbergh continued to influence aviation throughout his life. In 1931, with his wife, Anne Morrow Lindbergh, serving as copilot and navigator, Lindbergh charted international air routes for new commercial airlines flying across Canada to Asia. Two years later, the Lindberghs flew 30,000 miles mapping out commercial routes across the Atlantic. During World War II, Lindbergh worked with Ford Motor Company as a consultant on B-24 bomber production and then served as a technical adviser and test pilot for United Aircraft. Later, he went to the South Pacific to study fighter planes’ capabilities and to teach pilots how to conserve their fuel so they could increase their bombing range. As a civilian adviser in the Pacific theater, Lindbergh actually flew about fifty combat missions. On at least one sortie, he shot down a Japanese plane.

Seventy-six years after his famous transatlantic flight, North Carolinians still have reason to remember and to celebrate Lindbergh. To learn more about the man, his flight, and his legend, visit Lindbergh, a traveling exhibit produced by the Missouri Historical Society.

At the time of this article’s publication, RoAnn Bishop was an associate curator at the North Carolina Museum of History.

I have a shield pendant that

I have a shield pendant that was told to me was from Lindbergs transatlantic flight that was given to the conductor's of the railroads. Perhaps there was only 100 of these made. I would like to send a picture and request the email of whoever could help me identify this medallion.

Hope that you guys can put

Hope that you guys can put from where he started and where he ended. That would be very helpful.