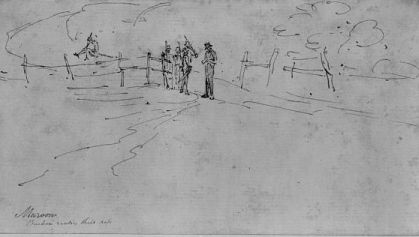 Maroons were escaped slaves who lived in swamps and forests, although the term "Maroon" was far more prevalent in the West Indies than in North Carolina. The vast Great Dismal Swamp, in particular, was long a hiding place for Maroons. Taking advantage of its size, fertility, and natural abundance, residents of the swamp were more likely to subsist in the Great Dismal than elsewhere in the state. Prior to the Tuscarora War in 1711, many fugitive slaves were given refuge in the Indian towns, and at least a few Maroons fought with the Indians in that conflict.

In the first half of the nineteenth century, fugitive slaves formed Maroon bands at various locations in the state, raiding the surrounding community for food and other supplies. From Wake County in 1818 it was reported that the governor had offered a reward of $250 for the capture of seven named outlaws, including $100 for their leader, Billy James. Onslow, Carteret, and Bladen Counties were the scenes of other incidents involving marauding bands of fugitive slaves.

"Maroon. Buckra reading their pass." Summary from Library of Congress: Drawing shows a white man (Buckra) reading the pass of Maroons (runaway slaves) on a road. Created between [between 1808 and 1815]. Courtesy of Library of Congress Prints and Photographs Division Washington, D.C. Available from http://www.loc.gov/pictures/item/2006676751/ (accessed May 21, 2012).