Henry William Harrington, brigadier general in the American Revolution, legislator, and planter, was born in London. He emigrated first to Jamaica, but after a short time moved to South Carolina where he settled on the Pee Dee River across the river from Cheraw and later at Welch Neck. He was interested in education and other improvements and soon became active in church and civic affairs, serving as vestryman and warden of St. David's Parish at Cheraw Hill, as a member of the first grand jury of the county, and later as deputy clerk of court. A prominent Whig, Harrington in August 1775 was commissioned captain of a volunteer company of foot and named chairman of the Committee of Observation for St. David's. His duties involved reporting on the state of the colonial militia, measures of defense, the powers to be granted the Committee of Safety, and the manufacture of saltpeter for the colony. In March 1776, when the Provincial Congress dissolved the king's Privy Council for a Legislative Council, Harrington was elected sheriff for the Cheraw District. In June of that year he marched his company of foot to Haddrell's Point near Charles Town to take part in the campaign against Sir Henry Clinton, but saw no action; however, shortly thereafter he exercised his office of sheriff by receiving prisoners to be confined in the Cheraw District jail. 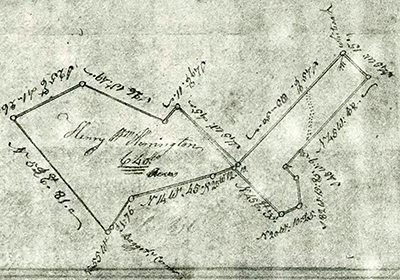 On 31 July 1776, at age twenty-nine, Captain Harrington married Rosanna, daughter of Rosanna Piper and Major James Auld. Rosanna Piper, the daughter of an Episcopal clergyman, the Reverend Michael Piper, had married, first, Howes Goldsborough, and, second, James Auld, a native of the Eastern Shore of Maryland and a lawyer. James and Rosanna settled in Anson County, N.C. After Harrington's marriage he left South Carolina to take up residence in that county on the east side of the Pee Dee a few miles from the border of the two colonies. In 1779 Richmond County was formed from part of Anson County, and on 25 November of the same year Harrington was commissioned a colonel with command of that county's militia. The following spring he took part in the defense of the coast of South Carolina under the command of General Benjamin Lincoln, but, before the city of Charles Town fell in May 1780, he had returned to North Carolina to sit in the Assembly. Harrington had left Charles Town "with the advice and unanimous consent of the Lieut-Governor and Council, and by General Lincoln's order" to carry a request for the aid of the North Carolina militia, according to a letter he wrote to his wife from Georgetown on 30 Apr. 1780.

In June 1780, he was promoted to brigadier general of the Salisbury District in the absence of General Griffith Rutherford. This was a pro tem appointment, and the Board of War instructed him to use his best judgment until an older and more experienced officer could be named. Harrington's headquarters were in the area of Cross Creek (Fayetteville), and his principal mission was the procurement of provisions as well as the protection of supplies. He was recommended to General Horatio Gates as "a very intelligent gentleman, who is well acquainted with this part of the country and with particular circumstances relating to the enemy and to us." Harrington held this command only five months. The General Assembly named Colonel William Lee Davidson to command the Salisbury District with the rank of brigadier general. Harrington received this news in late September with keen disappointment. He had excellent recommendations but western interests had prevailed in the Assembly. Determined to resign, he resolved, however, to remain with his troops because of news of an enemy advance towards his position. By November 1780 he wrote the Board of War that "the time I waited for is now arrived, and I have the happiness to know that the last of our foe has been obliged to retreat, and that by our own exertions." He was content to relinquish his command, saying, "so this my country is but faithfully served, it is equal to me whether it be by me or by another." He enclosed his commission and stated that he would remain at his post until relieved.

During these final weeks of his service Harrington, from evidence supplied in letters from Francis Marion and General William Smallwood to General Gates, was reluctant to commit his troops until his successor had arrived. Marion said he had asked him "to spare me his horse to endeavor to remove the post at King's Tree . . . but from what I know of the General I do not expect he will part with them," adding that "Harrington has not done any service with the troops he commands." Marion was piqued because Harrington had written to Gates regarding a regiment under his command and he did not believe that Gates had intended that he should serve under Harrington. General Smallwood proposed certain military positions, with Harrington's force drawn up midway between the Pee Dee and the continental encampment for the purpose "of cooperating with us occasionally, suppressing the Tories, or covering such supplies as might be necessarily drawn from the settlements."

Harrington submitted his resignation on 3 Nov. 1780; however, General Gates wished him to remain in the army. He had rendered efficient and honorable service, but he was compelled to decline. He wrote: "I would, with pleasure, continue to serve my country and think myself honored by your orders, but a brigadier's commission, without either District or Brigade, . . . cannot with honor be held. After what the Assembly have done in favor of another, it would appear like begging both commission and brigade; that in justice to myself I cannot think, even for a single moment, of altering my resolution."

Returning home, he sat in the General Assembly in January 1781. He had suffered great personal hardships during the campaigns. His home near Hailey's Ferry was plundered by the British and livestock as well as slaves were seized. Mrs. Harrington and her children sought refuge with friends in South Carolina. In July 1780 Harrington had requested a flag of truce for Colonel John Donaldson and Lieutenant Reuben Wilkinson to enter Charles Town and escort his wife and family home. She returned, but the fall of Camden to the enemy forced her to flee again, this time to Maryland. En route her party was attacked by the infamous Tory, Captain John Leggett, and her household goods were stolen or destroyed. Lost in this raid were the general's personal papers and much of his library. But the greater loss was that of a baby daughter, Harriet, who died from the rigors of the journey. Mrs. Harrington returned to her father's home in Anson County while her brothers went in pursuit of Leggett and his band. They could not overtake them and none of her property was found.

After the war Harrington brought suit for the return of a Negro servant taken in the raid at Hailey's Ferry. This servant then belonged to a Captain Campbell, a former British officer who settled on the Pee Dee. He had been sent to Jamaica but Captain Campbell had him returned to Harrington. The general also sued and obtained judgment against Leggett, who had transferred title to his lands to another to avoid confiscation. The land escheated to the state and Harrington was given title. When he learned of the poverty of Leggett's daughters, he gave them title to their land. Thus, on Harrington's death the Raleigh Register and the Raleigh Star observed that "the nicest sense of honor and strictest principles of justice marked every transaction of his life."

The Harringtons left the vicinity of Hailey's Ferry when peace returned and moved farther down the river. He represented Richmond County in the Assembly and in the senate at Hillsborough in 1783 and at New Bern in 1785. In 1787, he was nominated as a delegate to Congress but was defeated. He was appointed trustee of Salisbury Academy in 1784 and a trustee of The University of North Carolina in 1789, serving in that position until 1795. In 1791, he was one of the commissioners to fix the seat of government. He had contributed his services and part of his personal fortune to the cause of defense and continued to devote his time to his state and to his county, although he preferred the peaceful life of a planter. Harrington has been called Richmond County's leading citizen after the Revolution, when he held various positions such as chairman of the county court, administrator of estates, and bondsman for guardians, administrators, and officials. He owned large tracts of land and was a knowledgeable planter who earned the titles of "The First Farmer in the State" and the "Father of Export Cotton in North Carolina."

Nine children were born to Rosanna and Henry William Harrington, four dying in infancy. The oldest son, named for his father, served in the navy during the War of 1812 and later was prominent in the legislature. Another son, James Auld Harrington, was graduated from The University of North Carolina in 1808 and became a planter in South Carolina.

General Harrington died at home at age sixty-two and was buried in Wolf Pit Township, Richmond County, in the family graveyard overlooking the Pee Dee River. A marble slab marks his grave and etched upon it are the words: "Here lies one who united in himself the bold achievements of the statesman and patriot with the mild virtues of social life, the kind neighbor, the tender husband and the fond parent."