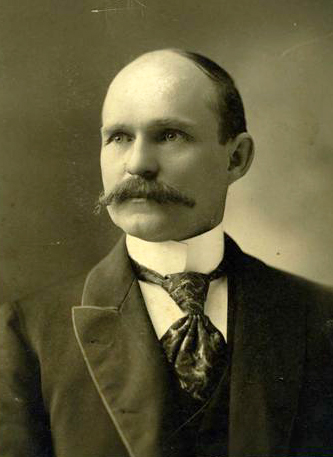 Robert D. Gilmer, lawyer and politician, was born in Mount Airy, the son of Samuel L. Gilmer, a merchant and native of Guilford County, and Matilda C. Moore Gilmer, the granddaughter of Jesse Franklin, governor of North Carolina in 1820–21. In 1879 Robert entered Emory and Henry College, Va., where he studied for two years before attending Dick and Dillard's Law School in Greensboro. He returned home and practiced law in Mount Airy from 1882 until he moved to Waynesville in 1885. In 1884 he married Love Brannon and later had two children, Joseph and Josephine. In 1886, he was chairman of the Haywood County executive committee of the Twelfth Judicial District. He then served two terms in the North Carolina House of Representatives in 1890 and 1892. In the legislature, where he was chairman of the Committee on Education and a member of numerous other committees, Gilmer introduced a bill to establish the Normal and Industrial College at Greensboro. For a number of years he was a member of the college's board of trustees. In 1894, he was chairman of the Democratic Congressional Committee of the Ninth District, and in 1896 he was a presidential elector. Afterwards he served with distinction as state attorney general in 1898 and 1904.

Gilmer, a member of the Methodist church, died after retiring to his home in Waynesville. Burial was in Greenwood Cemetery. He was the author of The Trial of the Sparrow for Killing Cock Robin (1889).

W. F. Tomlinson, Biography of the State Officers and the Members of the General Assembly (1893 [portrait]).