"Flight of the Imagination"

Thomas Edison said that flying would never be practical “until someone invents a machine that can stop in midair and hover like a bird.” The machine that allows a pilot this degree of control is a helicopter. And the first person to develop a working helicopter came from Carteret County.

William Luther Paul was known in his hometown of Davis as Mr. Fixit. This talented handyman made his own laborsaving tools for every use imaginable. In 1903, around the time that the Wright brothers were testing their flyer, Paul was experimenting with his Bumble Bee, a compound helicopter. Powered by an engine that Paul had made from four motorcycle engines bolted together, the machine had two four-blade rotors on top for vertical lift and a pulling propeller for forward flight.

Paul tested his helicopter in an open-ended barn that functioned as a wind tunnel. In 1907 the Bumble Bee lifted about five feet while tethered to the ground and carrying sixty pounds of sandbags. There were several eyewitnesses. Paul planned to test it with himself as the pilot, but after reading about a fatal plane crash, his wife begged him not to continue the experiments. Paul abandoned his project, without any tangible proof of its success. 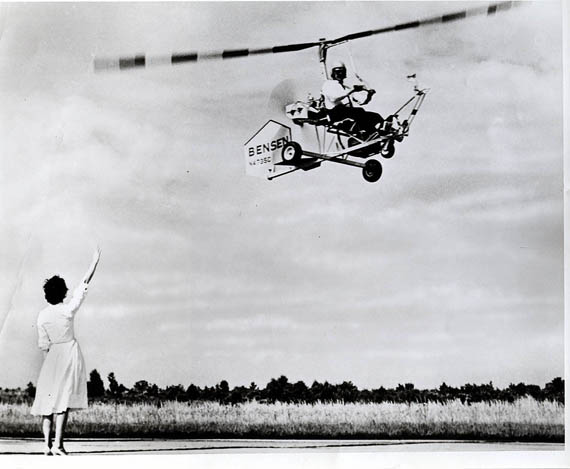 Another rotary-type flyer, the gyrocopter, was built by Igor Bensen of Raleigh. Bensen was born on April 1, 1917, in Rostov, Russia. He enrolled at Stevens Institute of Technology in New Jersey in the late 1930s. In 1939 Bensen took a summer job with Igor Sikorsky, generally recognized as the father of the modern helicopter. After working for Sikorsky, Bensen was a research scientist at General Electric before starting his own company, Bensen Aircraft Corporation, near Raleigh-Durham Airport.

Bensen wanted to mass-produce a “people’s flying machine,” so he designed his craft to be simple to assemble and operate, and inexpensive. Thirty dollars bought plans for a gyrocopter, and $1,795 would buy a kit. Bensen sold around ten thousand kits. His clients included diamond prospectors in the Amazon, crop dusters in the United States, and James Bond! In the 1967 movie You Only Live Twice, Bond piloted a highly modified gyrocopter that he called Little Nellie. The rocket launchers and smoke screens used in the movie did not come as standard features in the gyrocopter kits.

The Bensen gyrocopter was a highly maneuverable machine. Bensen set world records for speed (79 mph), altitude (7,275 feet), and distance (82.76 miles) in a gyrocopter named Spirit of Kitty Hawk. The Bensen Aircraft Corporation closed in 1989, but one of Bensen’s gyrocopters remains on permanent display at the North Carolina Museum of History in Raleigh. 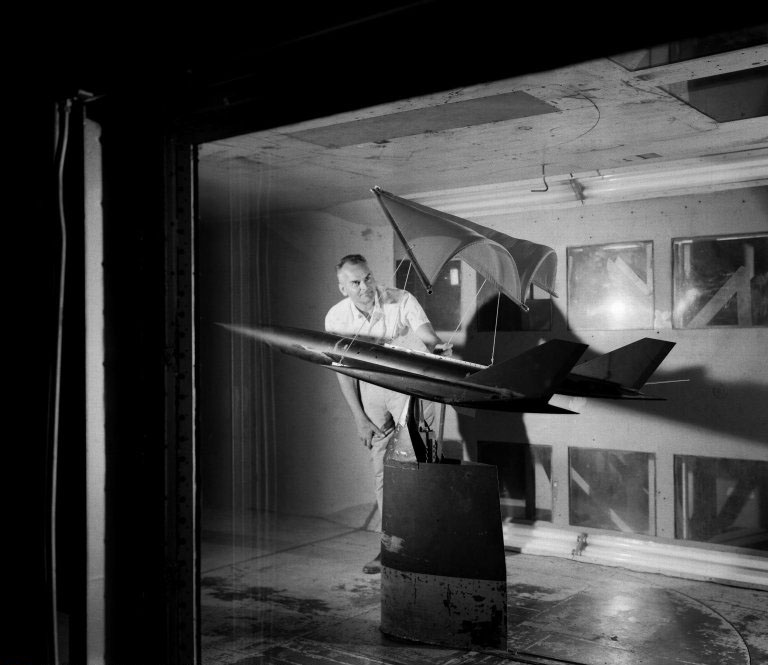 Another scientist who wanted to make flight possible for everyone is Francis M. Rogallo. Rogallo had joined the National Advisory Committee for Aeronautics (NACA), the forerunner of NASA, in 1936. He wanted desperately to fly a plane, but he never had the opportunity. So he began to think of other ways to fly. He devoted himself to designing a flexible wing—one that could be applied to man-carrying devices such as gliders. With the help of his wife, Gertrude, Rogallo built a wind tunnel at home and began testing wing models. In 1951 the Rogallos received a patent for a flexible delta-shaped (triangular) wing. The prototype of today’s hang gliders was made from one of Gertrude’s kitchen curtains.

After receiving a patent on the flexible wing, the Rogallos tried to interest government and industry in their design but were unsuccessful. Instead, they began producing flexible-wing kites as children’s toys. The Rogallo Flexible Wing Flyer was one of the first products to use the plastic Mylar. Unlike standard kites, it could crash multiple times and not be damaged. The toy kites were great, but Francis Rogallo was still determined to fly, so a full-scale version was needed.

The first full-scale, flexible-wing hang gliders were built for the Rogallos by a man who owned a clothing factory. The entire Rogallo family—Francis, Gertrude, and their four children—began flying the gliders in the sand dunes of the Outer Banks. The sport of hang gliding really took off in the early 1970s. Today hang gliding events occur at places like Jockey’s Ridge and Grandfather Mountain. Hang gliding enthusiasts everywhere honor the “father of hang gliding,” Francis Rogallo.

NASA, then known as NACA, took notice of Rogallo’s invention in 1957 after Russia launched the Sputnik satellite. Suddenly, the flexible wing had potential as a possible reentry tool for America’s rockets. NASA began conducting experiments with the gliders, the results of which were published in technical journals such as Popular Mechanics. One of these reports attracted the attention of engineer Thomas Purcell.

Purcell studied engineering at North Carolina State University. In 1961 Purcell, using photographs of Rogallo’s design from a magazine article, constructed a sixteen-foot-wide glider with an aluminum frame that he tested by towing it behind an automobile at the Raleigh-Durham Airport. Purcell called Rogallo one day, and the two engineers agreed to meet.

When Purcell arrived at NASA, he was surprised to find himself surrounded by engineers who were asking numerous questions about his FlightSail glider. Purcell had figured out how to do something that NASA had not—achieve stability in a towed glider. He continued to work on his glider. He replaced the wheels with floats for towing it behind a speedboat. He flew the pontoon glider for the first time at Lake Waccamaw on July 26, 1962. It worked so well that he never went back to land-based liftoffs again. This was the first water-based use of the Rogallo wing.

Innovations in aviation continue. To see the future of aviation, visit the NASA Web site at http://www.nasa.gov. Today NASA and private research companies search for ways to make aeronautical travel safer and more efficient. Aviation has come a long way in one hundred years, but there are many engineers and scientists who believe the quest for flight has just begun. Where will we go next? Will you be the one to take us there?

At the time of this article’s publication, Rebecca Lewis was the program coordinator of the Tar Heel Junior Historian Association. She served on the Pioneers of Aviation Exhibit Team at the museum, in addition to being the conceptual editor for this issue of THJH.

Resources in the NC Digital Repository