Reprinted with permission from the Tar Heel Junior Historian 50:2 (spring 2011) 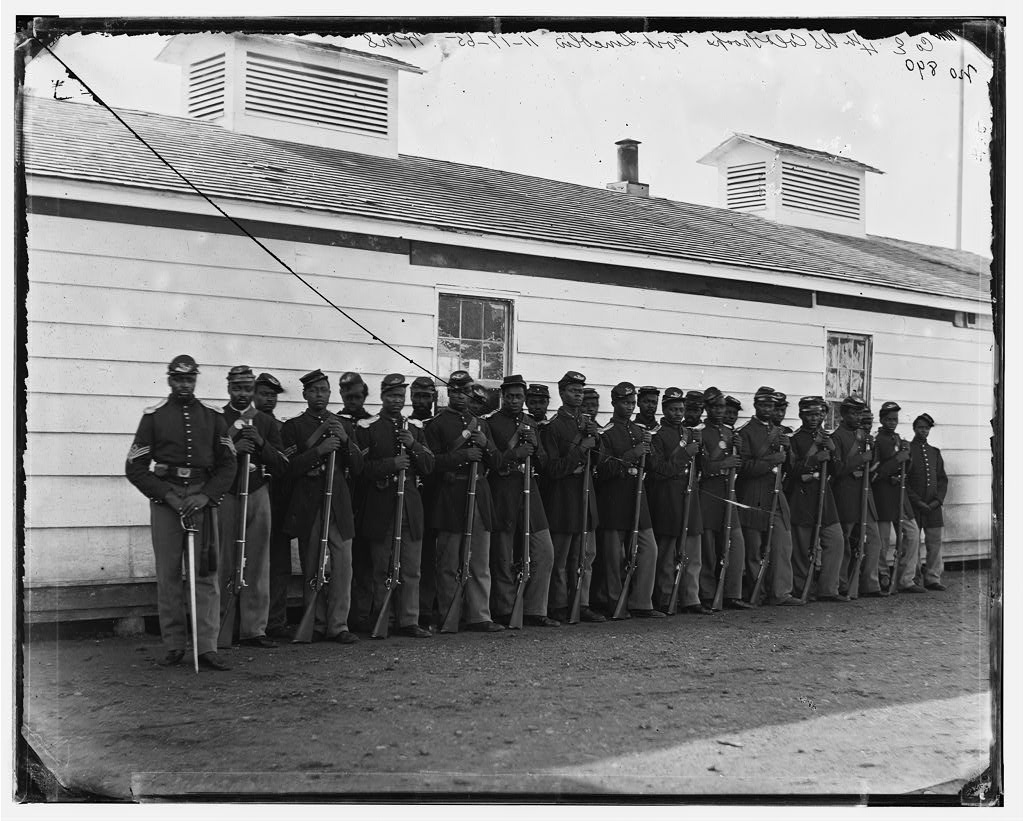 An elaborate ceremony took place February 7, 1998, in Southport. Modern Civil War reenactors, representing both Confederate and Union troops, honored the memory and rededicated the graves of two veterans of that war: Abram Blount and Abraham Galloway. Blount, a 20-year-old formerly enslaved man from Hyde County, enlisted in the 37th Regiment United States Colored Troops (USCT) on December 10, 1863. In the final stages of the war, 18-year-old Galloway, born a slave in Smithville (now Southport), enlisted in the same regiment. When the war ended, both men settled in Smithville. Upon their deaths, each was buried there in John Smith Cemetery.

Few soldiers in history better understood the goals for which they fought than African Americans—often called “colored” people at the time—who joined the Union army during the Civil War. Especially after President Abraham Lincoln signed the Emancipation Proclamation on January 1, 1863, these men knew that the war’s outcome would mean the difference between slavery and freedom for African Americans in the United States. Risking capture or even death, free and enslaved African Americans sought refuge within Union-occupied territory in northeastern North Carolina. They flooded areas including Plymouth, New Bern, Beaufort, and Roanoke Island, which fell under Federal control in early 1862. Often referred to as refugees, freedmen, or contraband, these African Americans provided valuable service to the Union as spies, pilots, messengers, guides, and laborers. They also served in the United States Navy and as recruits for USCT units.

Before the establishment of the national Bureau of Colored Troops in May 1863, it was reported that freedmen near Beaufort were drilling with weapons they had purchased for themselves. In New Bern they had formed their own militia. On June 19, 1863, the first company of USCT raised in North Carolina—and quite possibly the nation—was organized as an element of Colonel Edward A. Wild’s proposed African Brigade. The brigade’s First Regiment of North Carolina Colored Volunteers was based at New Bern. That town’s Colored Women’s Union for the Benefit of the Colored Brigade paid for its battle flag, inscribed with the word liberty. The Christian Recorder, a publication of the African Methodist Episcopal Church, reported that the colored people of New Bern were glad to cooperate in the defense of freedom.

The African Brigade did not develop as originally planned. Its major units were later designated as the 35th Regiment USCT, 36th Regiment USCT, 37th Regiment USCT, and 14th U.S. Colored Heavy Artillery. USCT recruits came from a variety of states, so these units were not exclusively made up of native North Carolinians. (Perhaps the best-known unit of African American troops was the 54th Massachusetts Infantry; the 1989 movie Glory told part of its story.)

At first, African American troops faced racial discrimination and prejudice from both the U.S. War Department and white Union soldiers. Colored troops received less pay and fewer food rations than white soldiers, they were given inferior equipment, and they were often required to perform servile labor for white units. They could not become officers unless they were chaplains (clergymen) or medical doctors. Besides, black soldiers had no guarantee that if captured, they would be treated properly as prisoners of war. They were more likely to be killed or condemned to excessive hard labor. They could also be returned to slavery.

The number of African American recruits from the Tar Heel State steadily increased during the war. John Randolph, a former slave from Washington, North Carolina, wrote in July 1864 that he hoped “the heroic deeds of colored men on the battlefield would show the world that we are deserving of the rights and title of citizens—a people worthy to be free—worthy to be respected.” Units formed in North Carolina participated in a variety of combat or combat-support
operations and missions in Maryland, Virginia, South Carolina, Florida, and Texas, as well as in their home state. Their performance equaled that of other units. Occasionally, USCT members received recognition, including the Congressional Medal of Honor, the nation’s highest decoration for bravery in combat.

The gigantic Union naval and army forces that invaded North Carolina near Carolina Beach in the winter of 1864–1865 included at least nine USCT regiments. Seasoned veterans who had fought in the battles of the Wilderness, the Crater, and New Market Heights in Virginia made up some of these regiments. Once ashore, they took part in attacks and other combat engagements that led to the capture of Fort Fisher and surrender of Wilmington. USCT units were among the victorious Union forces that entered that town on February 22, 1865. Approximately six weeks later, on April 3, 1865, the 36th USCT—formed in North Carolina—enjoyed the distinction of being the first Union infantry regiment to enter Richmond, Virginia, the capital of the Confederate States of America. After the surrender of General Joseph E. Johnston’s Confederate troops near Durham on April 26, 1865, USCT units participated in a grand Union victory parade
in Raleigh, reviewed by General William T. Sherman.

Along with their combat role, USCT units often thought of themselves as liberators and carriers of culture. They established churches, schools, lodges, and literary societies. Their very presence in an area offered vivid testimony to the end of slavery and the beginning of a new social order. The Christian Recorder reported that during the parade that followed the surrender of Wilmington, colored people (young and old) crowded the streets, cheering and exclaiming, “The chain is broken, joy! Freedom today.” Sergeant N. B. Sterrett, of the 39th USCT, asked one elderly African American woman if she was glad to see black troops. She replied, “It seemed that the good Lord has opened the heavens and handed you down in answer to my prayer.” Another woman reunited with her son, who had “left his home a slave, but had returned in the garb of a Union soldier, free, a man.”

Colored troops also gained knowledge and leadership skills that became useful later in life. For example, David Chapman, of Pitt County, enlisted in the 37th USCT in 1864 at age 17. Chapman was discharged as a sergeant when the war ended. He settled in Brunswick County, where he became a civic, educational, and religious leader. For him, as for so many others, the Civil War changed everything.