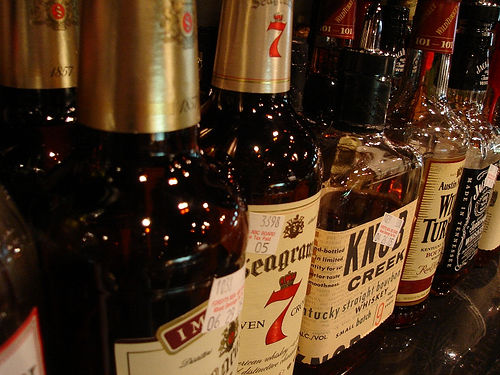 Whiskey-making and distribution has been part of North Carolina's commerce and culture from the beginning of European settlement. Whiskies in North America are made from a mash of rye, corn, barley, wheat, or other grains, which is fermented and aged in wooden barrels of various styles and conditions. Distilled spirits and the art of making them were important in European heritage, and, after the American Indians introduced the settlers to corn, the crop became an instant staple of local whiskey makers. In western North Carolina counties, settlers raised fine apple crops in addition to corn, and with apple cider came apple brandy. Whiskey-making stills, mostly single-family operations, could be found throughout the region.

In the 1600s and 1700s, taverns were places of social gathering in the Carolinas, and some towns grew up around crossroads establishments. There were laws against drunkenness but not against selling or making whiskey; some attempts at prohibition of alcoholic beverages came as early as 1852, but the movement garnered little attention by the state's General Assembly. By the middle of the 1800s, whiskey was a major commodity for producers in western North Carolina. Farmers in the mountains and foothills realized that, without adequate roads or train service, bringing a load of corn to market was not worth the wagon space. Distilling the corn into whiskey (usually bourbon) was much more economical and brought greater returns.

In the second half of the nineteenth century, producers in the western counties took their distilled spirits to Statesville for further distribution. Statesville was "the end of the line" for train service to the west for some time, so it became the logical shipping point for whiskey distribution across the Carolinas. It is estimated that during the 1880s, as many as 450 distilleries were shipping their products through Statesville. A freight agent of the Atlantic, Tennessee, and Ohio Railroad reported that between September 1879 and March 1880, nearly 57,000 gallons of whiskey had been shipped from Statesville on his railroad. A large amount of whiskey was also shipped on the Western Railroad in that period.

Major wholesale liquor houses were established in Statesville and prospered from the 1880s until the early 1900s, when statewide Prohibition came in 1909. In 1883 P. B. Key & Co. established a distributorship for whiskey. (Key was the grand nephew of Francis Scott Key, author of the "Star Spangled Banner.") The Julius Lowenstein family was a leader in whiskey distribution throughout the Carolinas. Some of the better whiskey of the period was bottled under the Lowenstein name. When whiskey making was declared illegal, the Lowensteins moved to Atlanta and founded the Norris Candy Company.

In 1905 the Watts law, named for Iredell County's state representative Alston D. Watts, was passed in Raleigh, prohibiting the manufacture and sale of liquor outside incorporated towns. It also established local-option elections, which generally went against the liquor interests, "drying up" many towns. After Prohibition was established by the Eighteenth Amendment in 1919, whiskey production continued through the illegal efforts of bootleggers, whose "moonshine" became a way of life in various parts of the state, particularly the western counties. Legal whiskey returned after Prohibition was ended by the Twenty-first Amendment in 1933, although most areas were dry until 1935. No significant commercial distilleries were established in the state.

In 1937 the General Assembly approved local-option elections to sell whiskey and other spirits solely through Alcoholic Beverage Control Commission (ABC) stores, which were given control of all aspects of whiskey production, possession, and sale in the state. Later, "liquor-by-the-drink" at bars and restaurants was approved, subject to a local-option election and certain limitations.

Hi, Looking for information on Jackson (Jack ) Bray distillery in the Cycle Now Hamptonville area of Yadkin County . Thanks Camilla

I am forwarding your question to reference services at the NC Government & Heritage Library. A librarian will contact you shortly to help if you are still looking for information.

Hello.
Came across a name of a distillery from 1901 in yadkin county, nc: Mathis & Phillips.
Any ideas as to what happened to it? Any way to find info on where in yadkin county it use to be?
It seems that a relative worked there at that time. I never heard of it before. Just curious.
Many thanks for any help.
Connie

Where would I find a list of distilleries and their location from say 1900 to current in North Carolina? Thank you for your help in advance.

And that’s a great question!  I connecting you via email with Reference Services at the N.C. Government & Heritage Library.  A librarian will contact you shortly to help with this question, if you’re still looking for information.

I'm wondering if anyone has

I'm wondering if anyone has any information on a distillery owned by my ancestor James A. Dean. Or if you know where I might find the info. We found a ledger signed by him from 1900. The info in the ledger had something to do with the IRS and it was listed as distillery number 20 in Cedar Rock, NC. Any information is appreciated. Thank you.

I am connecting you via email with Reference Services at the N.C. Government & Heritage Library.  A librarian will contact you shortly to suggest resources, if you are still looking for information.