by David Stick and Margaret Foote, 2006 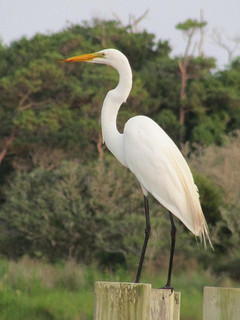 Ducks, geese, swans, and other waterfowl have played a prominent role in the lives of many North Carolinians, especially those living in the vicinity of the coastal sounds. These birds all breed in the far northwestern part of the North American continent, some as far north as 1,000 miles above Hudson Bay. In the fall they head south for the winter, following four established migratory routes: the Pacific, Central, Mississippi, and Atlantic Flyways. Those terminating their flight in North Carolina use the Atlantic Flyway, which crosses the Great Lakes and continues the southern trek from Pennsylvania to Delaware, Maryland, and Virginia before reaching North Carolina. Beginning in 1934, the federal government acquired Lake Mattamuskeet in Hyde County and transformed it into a 50,000-acre National Wildfowl Refuge, then added the 43,000-acre Swanquarter Refuge and the 398,000-acre Pea Island Refuge. All three are managed by the Fish and Wildlife Service, which carries on programs for growing appropriate feeds for the different types of birds and controlling hunting activity.

Ducks and other waterfowl are of the family Anatidae, characterized by having a broad, flat bill, short legs, and webbed feet. Geese also belong to the Anatidae family and are often included in the general duck category, though they are easily distinguished by having a shorter and more pointed bill than the much smaller ducks and a shorter neck than the larger swan. Herons, long-legged wading birds; bitterns; and egrets are members of the Ardeidae family. They generally inhabit marshlands, mudflats, and lake edges, and 12 of the 60 species known worldwide are present in North Carolina.

Early visitors to North Carolina commented on the tremendous number of wildfowl they saw. Currituck Sound was noted especially for the quantity and variety of ducks wintering there, while Pamlico Sound was noted for its Canada geese and brant, though ducks were in abundance there as well. Before recreational hunters discovered Currituck and Pamlico, local market gunners supplied large quantities of waterfowl for table fare in the north. The canvasback duck, which tended to raft far out on the open sounds, was considered one of the premier delicacies. Redheads also remained far out on the reefs, while mallards and black ducks were the easiest to kill because they tended to feed near shore. 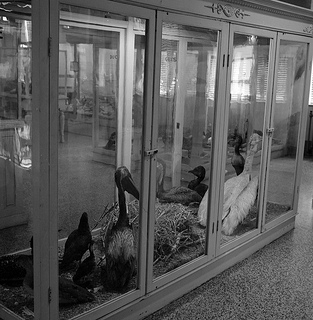 Three kinds of geese populate North Carolina sounds and lakes in winter, the most common being the Canada goose, which is often seen year-round in the state. The others are brant, a smaller variety of goose having a black neck and head, and the snow goose, which is recognizable by its white plumage and black-tipped wings. While disease and a shortage of feeding areas have combined to cause a decrease in the brant population so severe that these birds are seldom encountered now, the numbers of snow geese wintering at Pea Island in the Cape Hatteras National Seashore and elsewhere seem to have been maintained.

Records of herons in North Carolina date back to the state's early history, with mentions in works such as Thomas Harriot's A Briefe and True Report of the New Found Land of Virginia (1588). John Lawson, in A New Voyage to Carolina (1709), mentions the gray heron, the abundant, slow-flying white heron, and three types of bittern. Common permanent residents of the state include the great blue heron, the largest heron in America; the little blue heron, listed as a species of special concern in the state; the tricolored heron, also a species of special concern; the yellow-crowned night heron; the black-crowned night heron; the great egret; and the snowy egret, another species of special concern. The cattle egret, an African native, reached North Carolina by 1956 and along with the green heron is now a common summer resident. 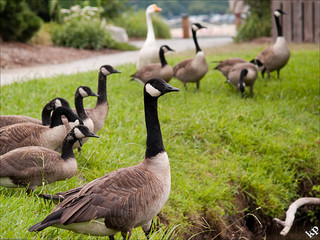 The state's egret population did not escape the whims of late nineteenth-century fashion. A vogue for the plumes of the great egret and the snowy egret, used to adorn women's hats, led to such a massive killing of these birds that they were nearly exterminated. In the early twentieth century, laws were passed to protect the egret, and the North Carolina population has risen through the decades. Although some species have had dips in numbers at various times, the general egret, heron, and bittern populations remain stable in North Carolina.

As duck and goose hunting gained in popularity on the North Carolina sounds, the most experienced of those engaging in the sport learned to make use of different hunting methods in different locations. Among the most productive were the coffin-like batteries used by hunters who seemed to thrive on discomfort, though the batteries were subsequently banned, as was the use of live decoys. Elevated stake blinds, built in the summers to accustom the fowl to their presence by the beginning of hunting season, covered mile after mile of sand reefs in Pamlico Sound. The use of brush blinds or boxes along the shore was especially prevalent in Currituck Sound.

Visiting hunters had to find someplace to stay, and by the latter part of the nineteenth century, affluent sportsmen began buying up large tracts of land, often extending from sound to ocean, and forming hunting clubs-complete with clubhouses and quarters for the caretakers and their families as well as boats, decoys, and private ponds. As their numbers increased, the clubs began to fit into size-related categories, ranging from corporation and partnership clubs, each with 10 to 20 members, to single-ownership clubs. Relatively few of these clubs have survived, however, a result of the decrease in the population of fowl, increasing restrictions on the number and type of birds that can be killed, and the intrusion of developers who have bought up many of the club properties and turned them into resort facilities.