The North Carolina Birding Trail is a network of more than 300 viewing locations of habitats such as coastal estuaries, longleaf pine savannas, and spruce-fir forests that provide food and shelter for more than 460 bird species. The state is an excellent birding location because its geographical setting along the Atlantic Flyway offers breeding and wintering grounds for many species. Many migratory birds depend on nesting grounds, migratory stopover places, and wintering locations at the trail sites. 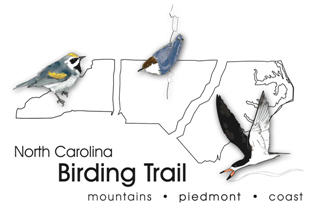 As the trail helps to relate people to birds and bird habitats, it also connects educational and historical attractions with communities and businesses across the state and increases the understanding of bird diversity in North Carolina.

Efforts to develop the trail were begun in 2004 when representatives of Audubon North Carolina, N.C. Cooperative Extension, N.C. Sea Grant, and N.C. Wildlife Resources Commission formed a steering committee. This partnership was expanded in 2005 to include N.C. State Parks and U.S. Fish and Wildlife Service. The six stakeholders set as their goal “to conserve and enhance North Carolina’s bird habitat by promoting sustainable bird watching activities, economic opportunities, and conservation education.”

In 2005, a trail coordinator was hired by the Wildlife Resources Commission, and public meetings in Wilmington and Plymouth were held to solicit support and describe plans for the trail. Also in that year, the first nominations for trail sites in the coastal plain region were solicited. Initial nominations for sites in the piedmont region were solicited in 2006 and for mountain sites in 2007.

On June 19, 2007, a ribbon-cutting ceremony for the Coastal Plain Trail of the NCBT was held at Hammocks Beach State Park in Swansboro. A similar ceremony for the Piedmont Trail was held on May 15, 2008 at Durant Nature Preserve in Raleigh. A third ceremony was held on June 25, 2009 at the N.C. Arboretum in Asheville for the Mountain Trail.

Grants provided by the N.C. Department of Commerce, Progress Energy Foundation, The Wildlife Society, Golden LEAF Foundation, and other groups have helped to develop and promote the trail. In addition, OutreachNC Magazine, a regional publication, featured a monthly profile of selected trail sites in 2018.