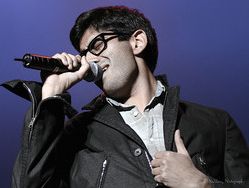 Singer Anoop Desai was born in Cary, North Carolina to an Indian father, Manoj Desai, and South African mother, Nalini Desai, on December 20, 1986. He attended Fuller GT Magnet Elementary School and Carnage Middle School in Raleigh, then moved to Chapel Hill, where he went to Phillips Middle School and East Chapel Hill High School. At East Chapel Hill High, Desai helped found an all-male a cappella group, the Chiefs of Staff. At the University of North Carolina at Chapel Hill, he continued to pursue his interest in singing as the President Emeritus of the a cappella group, the Clef Hangers. He graduated from UNC-CH in 2008.

Anoop first gained national fame with his performance on the television series American Idol, where he took sixth place during season eight in 2008. He has since appeared on several television shows, including The Ellen DeGeneres Show, Regis & Kelly, and Mo’Nique. He released his debut EP, All is Fair, in 2010, and recently collaborated with UK producers Shayal and Super Producer Sak-Pase on Zero, which was released in spring 2011. He currently lives in Atlanta, GA and continues to pursue a career in pop music.

Anoop?lol! first or last name? he looks good but he has a funny name!