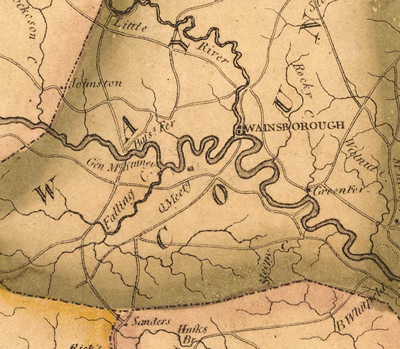 Richard McKinne, militia general and politician, was born on one of his father's plantations in Johnston (now Wayne) County, the son of Colonel William McKinne and his wife Anne Grimes, the daughter of John Grimes of Dobbs County. His father was a distinguished planter, politician, member of the first vestry of Christ Church Parish in New Bern, and Revolutionary soldier. The McKinne family descended from Michael Mackenny, a Scottish immigrant who settled in Isle of Wight County, Va., in the seventeenth century. Colonel Barnabas McKinne, Michael's son, was the first to bring the family name to North Carolina, where he settled in 1702 in present-day Edgecombe and Halifax counties.

Little is known of Richard McKinne's early life. Sustained family tradition states that he received some formal instruction from Thomas Thomlinson at the New Bern School (later the New Bern Academy). This school was opened in January 1764 under the patronage of the Reverend James Reed, rector of Christ Church. McKinne was at that time twelve years old, and doubtless his father's place on the vestry of the parish influenced his attendance at the new school. What remains of McKinne's library attests to an interest in good literature and a cultivated mind.

For a time during the American Revolution young McKinne was a soldier in the Whig forces, and in the years that followed he rose in the militia; eventually, the General Assembly appointed him a brigadier general. In public life he was a justice of the county court, a commissioner for Wayne County (1782), and a justice of the peace. When the first court convened in the new courthouse at Waynesborough on 9 July 1787, he was one of the justices attending. For a long period he was an influential member of the General Assembly, serving in the House of Commons in 1782–83, 1786–87, and 1790. He was a member of the senate in 1788–89 and 1791–99.

McKinne was a delegate from Wayne County to the constitutional convention held at Hillsborough on 21 July 1788 to ratify the U.S. Constitution. There he supported the Anti-Federalist faction led by his father's old friend, Willie Jones of Halifax. McKinne voted for the resolution calling for enactment of a bill of rights asserting civil and religious liberty before ratification of the federal Constitution. At the second convention, which met the next year in Fayetteville, McKinne again represented Wayne County and on 21 Nov. 1789 voted for ratification of the Constitution. Since he represented both agricultural and commercial interests, he was doubtless persuaded by the Federalist economic argument that these interests would suffer unless the state joined the Union. He remained firm in his Anti-Federalist outlook, as evidenced by his refusal to take the oath of allegiance to the Constitution after the federal government passed the Judiciary Act of 1789 giving the Supreme Court authority over state courts.

The Price-Strother map of North Carolina places "Gen. McKinney" on the south side of the Neuse River at the "Roundabout." Jonathan Price surveyed for the map about 1795, though it was not published until 1808, eight years after McKinne's death. His wife, Sarah, survived until 1837. It is said that General and Mrs. McKinne were buried on their estate at the Roundabout on the Neuse River, but their graves are no longer in evidence.