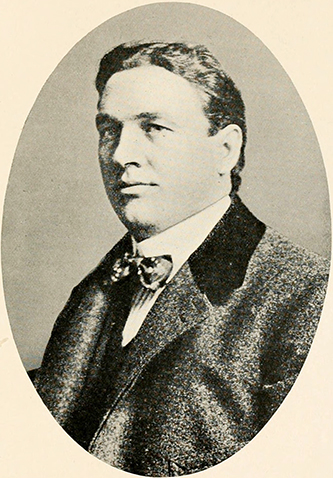 Edmond Spencer Blackburn, lawyer, legislator, congressman, and Republican party leader, was born on a small farm near the upper waters of Meat Camp Creek in Watauga County. He attended a public school in the area and later studied at Oak Hill Institute in Virginia. At the age of twenty he returned to Watauga County to teach at Cove Creek Academy. Here he earned a lasting reputation as a dynamic teacher and leader among the young men of his county. After some two years at Cove Creek Academy, Blackburn went to Statesville, where he studied law with Major H. Bingham. In 1890, Blackburn was admitted to the bar and commenced legal practice in Jefferson, Ashe County. In 1892 he was a candidate for elector-at-large for Benjamin Harrison. In the 1895 legislative session he was chosen reading clerk in the state senate. During the 1897 session of the legislature he represented Ashe County in the state house of representatives, and in 1898 he was appointed by President William McKinley to the position of assistant U.S. district attorney for the Western North Carolina District.

In 1900, Blackburn was the Republican party candidate for Congress from the Eighth District. He defeated his Democratic opponent, J. C. Buxton of Winston-Salem, and served in the Fifty-seventh Congress (4 Mar. 1901–3 Mar. 1903). In the 1902 congressional election he was defeated by Theodore F. Kluttz of Salisbury. The gerrymander of the Eighth District by the 1901 session of the North Carolina legislature was considered a major cause of Blackburn's defeat. In the 1904 election he defeated W. C. Newland, a Democrat, for the Eighth Congressional District seat in the Fifty-ninth Congress (4 Mar. 1905–3 Mar. 1907). During his second term in Congress, Blackburn married the socially prominent daughter of Colonel M. M. Parker of Washington, D.C. Blackburn's wife was the niece of Judge Alton B. Parker, Democratic presidential candidate in 1904.

Following his marriage, Blackburn moved his residence from Wilkesboro, where he practiced law, to Greensboro, apparently to avoid bringing his wife into what were described as the "wilds" of the Eighth Congressional District. After he relocated in Greensboro, Blackburn's role in Republican party politics in North Carolina steadily declined. During the 1906 congressional race, Democrat Richard N. Hackett of North Wilkesboro made much political capital from the charge that while Blackburn actually lived in Greensboro, in the Fifth Congressional District, he sought election to office in the Eighth. Hackett was elected to replace Blackburn in the district.

While residing in Greensboro, Blackburn sought to assert a larger role in the affairs of the Republican party. He was outspokenly critical of factional leaders who served as patronage brokers but who contributed little to the expansion of party strength at the state level or to the election of state Republican candidates to office. He challenged the Republican state organization, the party chairman, Thomas S. Rollins, and the mouthpiece of party leaders, the Daily Industrial News of Greensboro. Blackburn launched his own newspaper, the Weekly Tar Heel of Greensboro, to represent the views of a faction in the party strongly oriented toward the western and northwestern counties of North Carolina, the Republican party stronghold. He maintained that elected Republicans should have more control over the distribution of patronage among Tar Heels.

Blackburn challenged Spencer Bell Adams, the candidate of the Republican state organization, for chairmanship of the party executive committee in the state convention of 1906 in Greensboro. The impassioned speech Blackburn delivered from the balcony of Guilford Hotel to his followers from Western North Carolina was long remembered by party analysts. However, Blackburn was defeated by Adams in the contest for chairmanship. Subsequently, following his defeat by Richard N. Hackett in the congressional race, Blackburn's influence in state politics was eclipsed. A highlight of the Greensboro convention was the address by Secretary of War William Howard Taft, in which he charged that the Republican party in North Carolina would fare better if Democrats were given patronage appointments under a Republican administration. Taft's remarks were interpreted as a pointed indictment of Blackburn's role in the factional squabbling among Republicans, and Taft was thought to represent the views of President Theodore Roosevelt. In 1908 and 1910, Blackburn supported John Motley Morehead's campaign against factional rivals in the Republican party.

Subsequently, Blackburn resided briefly in Tulsa, Okla. Shortly thereafter he moved to Elizabethton, Tenn., and set up a law office. There he died of a heart attack, survived by his widow and two children. Blackburn was buried in Old Hopewell Cemetery, near Boone.