Tobacco Bag Stringing: Life and Labor in the Depression

In the late nineteenth and early twentieth centuries, families throughout the tobacco-growing regions of North Carolina and Virginia earned much-needed income by sewing drawstrings into cotton tobacco bags. Long forgotten today, tobacco bag stringing was a common activity in many communities. Because the labor was not physically demanding and could be done at home, the work attracted many women, children, and others who needed money to supplement their farm incomes, or who could not find work in nearby factories and mills.

Tobacco bags were used to hold loose tobacco, which smokers used in pipes or to roll their own cigarettes. The bags were usually made of cotton or muslin cloth and measured about four by three inches. They were sewn down the length of two sides, with an opening left at the top. Tobacco bag stringers would thread the string into both sides, enabling the smoker to pull on the ends to close the bags. Experienced stringers were remarkably efficient. One woman from West Durham, North Carolina remembered working only in her spare time and still stringing as many as a thousand bags a day, for which she earned about fifty cents.

Many of the bag stringers received work through a “bag agent,” who was employed directly by the manufacturer. The agent was often a local businessman or county government official who was well known throughout the community. Distributing tobacco bags became an important responsibility when demand for work outpaced the number of bags available. A bag agent in Leaksville, North Carolina in 1939 described the need for work in his community:


The mills here have been running short time for several years now. And I believe less than one half of the people normally employed are now at work. Boiled down this means there probably is one in each household partly employed [as a tobacco bag stringer]. So every day I have hundreds of requests for bags above that I am able to provide. They come at me from every angle, telephone, doorbell and since my business is in my residence, they'll even go around the house and come in the back door just to tell me how needy they are, and ask me to please get them some bags to string to help out in the little they now receive.

In 1939, three companies produced the bulk of the tobacco bags used in the United States. Of these, only one—the Golden Belt Manufacturing Company, a subsidiary of American Tobacco in Durham, North Carolina—had come up with a way to insert drawstrings mechanically. The other two companies—the Millhiser Bag Company in Richmond, Virginia and the Chase Bag Company in Reidsville, North Carolina—had to rely on human labor to string the bags. This was not a small business: the three companies combined to produce a billion tobacco bags a year. 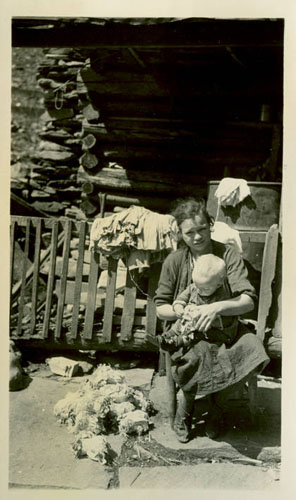 On June 28, 1938, President Franklin D. Roosevelt signed into law the federal Fair Labor Standards Act, establishing a minimum wage of twenty-five cents an hour. This law threatened to disrupt the livelihood of home workers, whose activities were largely unregulated. Because tobacco bag stringers were paid based on how many bags they prepared rather than how many hours they worked, it was difficult to establish whether or not the bag stringers were receiving an hourly wage that met the new federal standards. With the rate of pay at around fifty cents for a thousand bags, it would be nearly impossible for tobacco bag stringers to earn enough to satisfy the requirements of the new law. Most earned on average between five and thirteen cents an hour.

Not long after the Fair Labor Standards Act was passed, the Virginia-Carolina Service Corporation, based in Richmond, began lobbying for an amendment to the act that would exempt home workers. The Service Corporation commissioned a report to argue for the vital importance of the income earned from tobacco bag stringing by many families in Virginia and North Carolina. The authors of the report solicited and published testimony from agents who distributed the bags and from local government officials. The bulk of the report contains photographs and descriptions of women and men who relied on tobacco bag stringing as a supplemental and, in some cases, a primary source of income. The authors interviewed 147 families, primarily in and around Wilkes and Rockingham Counties, North Carolina, and Richmond and South Richmond, Virginia.

The completed “Report on Tobacco Bag Stringing Operations in North Carolina and Virginia” was produced in 1939. The short, factual sketches of tobacco bag stringers are similar to the life histories that were being prepared around the same time by writers for the Federal Writers' Project. The biographical notes discuss the health and living conditions of the bag stringers and list their current expenses in an effort to illustrate the importance of the income earned from tobacco bag stringing. Most of these profiles are accompanied by striking black and white photographs, many of which document the heartbreaking poverty in which so many of these people lived.

Mrs. Daisy Stamper, a tobacco bag stringer, with her family.