The Research Triangle Park (RTP) was founded by a committee of government, university, and business leaders as a model for research, innovation, and economic development. By establishing a place where educators, researchers, and businesses come together as collaborative partners, the founders of the Park hoped to change the economic composition of the region and state, thereby increasing the opportunities for the citizens of North Carolina. 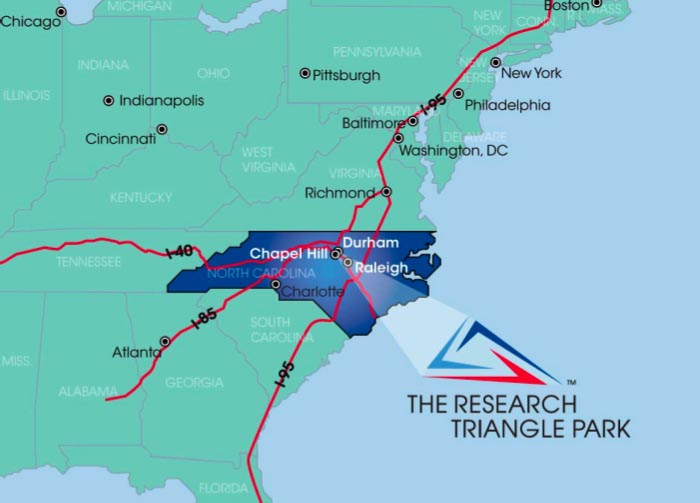 The Research Triangle Park is located within 600 miles of 50 percent of the nation's population.

RTP is at the center of the dynamic Raleigh-Durham region with a population of 1.3 million within the defined metropolitan area and nearly 3 million within a 60-mile radius of the Park. The "Triangle" from which RTP was named is formed by the geographic location of the region's three highly regarded educational, medical, and research universities...the University of North Carolina at Chapel Hill, Duke University, and North Carolina State University. In addition, RTP draws on the intellectual capacity of a host of other community colleges and higher education institutes. Together, these institutes create knowledge assets and provide a steady supply of trained scientists, engineers, managers, and technicians to the region's workforce.

In addition to this academic and research capacity, the region possesses an established network and infrastructure to support a diverse range of companies. Ranging from the Council of Entrepreneurial Development to the North Carolina Biotechnology Center to the RTI International, a host of organizations and networks exist to complement and catalyze activities around a number of cluster industries. These institutions and companies work together with Park companies and the universities, reflecting a spirit of cooperation and learning within the scientific and technological community. Since it was established, the Park has witnessed a steady and stable increase in the number of companies and employees. Currently, there are 136 research and development facilities in RTP. More than 37,600 people work in RTP with combined annual salaries of over $2.7 billion. The average salary in the Park is $56,000 annually, nearly 45 percent larger than the regional and national average. 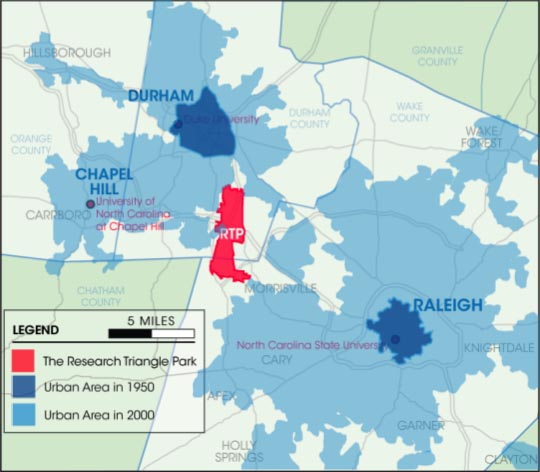 The urban areas of Raleigh and Durham have grown tremendously since 1950.

More than a location and an engine for the economic growth, RTP has been a center of innovation. It is home to winners of the Nobel and the Pulitzer prizes, as well as recipients of the U.S. Presidential Award and National Foundation Awards. Just as important, it is the workplace of technical, chemical, and biomedical scientists and patent holders whose discoveries have impacted the lives of all citizens in this country and around the world. Some of the most profound discoveries of the 20th century have been influenced by scientists and researchers working in RTP, including the invention of the Universal Product Code, 3D ultrasound technology, and Astroturf. Among the most significant of RTP accomplishments was the discovery of Taxol, hailed by the National Cancer Institute as the most important new anti-cancer drug of the past 15 years, and AZT, a drug used to fight HIV-AIDS.

The Park is managed by the Research Triangle Foundation of North Carolina, a non-profit organization founded in 1959. The Foundation is responsible for the overall management of the Park as well as ensuring that the regulations developed by the Park's founders to protect the natural environment and aesthetics of RTP are preserved. Under the development regulations governing the Park, a certain percentage of the total area is devoted to green space. In addition, companies in RTP must obey stringent setbacks and land coverage regulations to maintain the natural environment of the Park and its surroundings.

The idea for RTP stemmed from the need to reverse a number of negative economic trends facing the North Carolina economy. In the mid-1950s, North Carolina's per capita income was one of the lowest in the nation. In 1952, per capita income in North Carolina was $1,049, compared to $1,121 for the eleven state Southeast region, and $1,639 for the continental United States. In addition the state's economy was dominated by low-wage manufacturing industries such as furniture, textiles, forestry, and small-scale agriculture. The state was facing a serious "brain drain" as graduates in the state were leaving in search of better jobs, and those attending college outside the state were not returning.

Given the expected consequences, leadership within the state sought to reverse these trends. Upon the urging of some private sector leaders such as Robert Hanes, the president of Wachovia Bank and Trust Company, and Romeo Guest, a Greensboro building contractor, and with the help and support of North Carolina State Chancellor Carey Bostian, Governor Luther Hodges commissioned a concept report on the idea of the establishment of a research park to diversify the state's economic base. By the end of 1956, the University of North Carolina and Duke University joined the effort and the Research Triangle Development Council was formed. The vision was to attract research companies from around the nation to locate in a parcel of land surrounded by the state's research universities. The resulting "Research Triangle Park" would be a place where companies could take advantage of the region's intellectual assets in individual campus settings that provided a ready physical infrastructure.

It was decided that the Research Triangle project idea was a valid concept and should be undertaken as a private effort with engagement of the three flagship universities rather than a state/government sponsored effort. In particular, the Park would be set up to "encourage and promote the establishment of industrial research laboratories and other facilities in North Carolina primarily in, but not limited to, the geographical area or triangle formed by the University of North Carolina at Chapel Hill, North Carolina State College of Agriculture and Engineering of the University of North Carolina at Raleigh, and Duke University at Durham." The Park would also "promote the use of research facilities" at the universities and "cooperation between the three institutions and industrial research agencies." The end goal was to "increase opportunities of the citizens of this state for employment and to increase the per capita income of the citizens of the state."

While support for the establishment of RTP was growing, the project had several obstacles to overcome. The first was the image of the South in mid-20th century America. In part due to problems of segregation, the region did not have the most progressive reputation. North Carolina...and the U.S. South in general... was not known for innovation or entrepreneurial activity. In addition, companies at that time tended to maintain their research facilities near their manufacturing sites which were predominantly located in the northeast and mid-western parts of the country. The Triangle region did not posses any manufacturing facilities for the types of "new-line" industries the Park was targeting. Finally, the committee needed to raise the funds to acquire, promote and develop the parcel of land that was to become RTP. 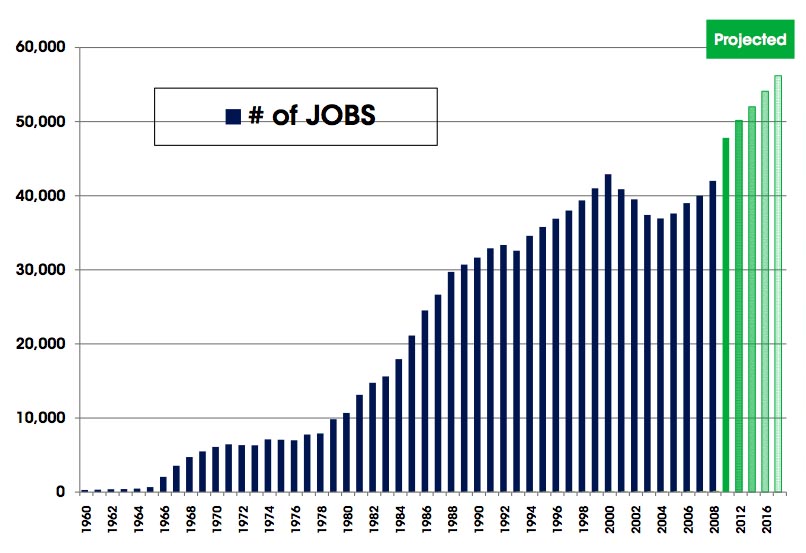 RTP grew slowly at first, but employment grow rapidly in the 1980s and 1990s.

The first five years of the Park's existence were relatively slow. While Chemstrand, a company jointly owned by Monsanto Corporation and America Viscose, announced its decision to come to the Park in 1960, it was not until 1965 that growth in the Park took off. In 1965, IBM announced that it would locate a 400 acre, 600,00 square foot research facility in the Park. Also that year, the U.S. Department of Health, Education, and Welfare decided to locate its new $70 million National Environmental Health Science Center at the Park. With the location of a substantial government presence and private sector company, the Park gained credibility as a place for research and development.

Due in part to the existence and extension of road, water, and sewer infrastructure in Durham County, the early growth of the Park was in its Northern section. In addition, major highway improvements, including the building of North Carolina route 147 to connect Duke University and downtown Durham to the Park (1973), the construction of Interstate 40 from the Park to Chapel Hill (1985), and improvements to the region's Raleigh-Durham International Airport helped to improve the Park's competitive position.

In the following 40 years, growth in the park has averaged six new companies and an addition of roughly 1,800 employees per year. The original parcel of land that made up RTP in 1959 consisted of 4,400 acres. Through the years, the Foundation acquired more land, surpassing 5,500 acres by 1979 and totaling 6,971 acres presently. In the same period, the Park's developed space has increased from only 200,000 square feet in 1960 to more than 20 million square feet in 2005. Mirroring the information communications technology boom in the late 1990s, the Park reached a peak employment level of 45,000 in 2001. Although the number of employees declined slightly in the ensuing recession, the number of companies in RTP has increased steadily. Large companies continue to make up the majority of the Park's employment numbers. The guiding assumption behind the initial recruitment strategy for the Park was to attract larger, more established companies that would build a culture in which smaller, start-up industries could thrive. The theory has proven accurate, as a number of smaller, spin-off companies have emerged.

Beginning with the first planning session in 1956, North Carolina's leadership took deliberate and rather ambitious steps to make a positive change in the state's economy. In the fifty years that have elapsed, the vision and commitment of that group has been carried forward and has resulted in the development of a unique parcel of land that is home to one of the greatest critical masses of knowledge workers and intellectual activity. With RTP as its driver, the Triangle region has emerged as one of the top five high technology regions worldwide.