President Reagan enjoyed unusually high popularity at the end of his second term in office, but under the terms of the U.S. Constitution he could not run again in 1988. The Republican nomination went to Vice President George Herbert Walker Bush, who was elected the 41st president of the United States.

Bush campaigned by promising voters a continuation of the prosperity Reagan had brought. In addition, he argued that he would support a strong defense for the United States more reliably than the Democratic candidate, Michael Dukakis. He also promised to work for "a kinder, gentler America." Dukakis, the governor of Massachusetts, claimed that less fortunate Americans were hurting economically and that the government had to help them while simultaneously bringing the federal debt and defense spending under control. The public was much more engaged, however, by Bush's economic message: No new taxes. In the balloting, Bush had a 54-to-46-percent popular vote margin.

During his first year in office, Bush followed a conservative fiscal program, pursuing policies on taxes, spending, and debt that were faithful to the Reagan administration's economic program. But the new president soon found himself squeezed between a large budget deficit and a deficit-reduction law. Spending cuts seemed necessary, and Bush possessed little leeway to introduce new budget items.

The Bush administration advanced new policy initiatives in areas not requiring major new federal expenditures. Thus, in November 1990, Bush signed sweeping legislation imposing new federal standards on urban smog, automobile exhaust, toxic air pollution, and acid rain, but with industrial polluters bearing most of the costs. He accepted legislation requiring physical access for the disabled, but with no federal assumption of the expense of modifying buildings to accommodate wheelchairs and the like. The president also launched a campaign to encourage volunteerism, which he called, in a memorable phrase, "a thousand points of light."

Bush administration efforts to gain control over the federal budget deficit, however, were more problematic. One source of the difficulty was the savings and loan crisis. Savings banks - formerly tightly regulated, low-interest safe havens for ordinary people - had been deregulated, allowing these institutions to compete more aggressively by paying higher interest rates and by making riskier loans. Increases in the government's deposit insurance guaranteed reduced consumer incentive to shun less-sound institutions. Fraud, mismanagement, and the choppy economy produced widespread insolvencies among these thrifts (the umbrella term for consumer-oriented institutions like savings and loan associations and savings banks). By 1993, the total cost of selling and shuttering failed thrifts was staggering, nearly $525,000-million.

In January 1990, President Bush presented his budget proposal to Congress. Democrats argued that administration budget projections were far too optimistic, and that meeting the deficit-reduction law would require tax increases and sharper cuts in defense spending. That June, after protracted negotiations, the president agreed to a tax increase. All the same, the combination of economic recession, losses from the savings and loan industry rescue operation, and escalating health care costs for Medicare and Medicaid offset all the deficit-reduction measures and produced a shortfall in 1991 at least as large as the previous year's.

End to the Cold War 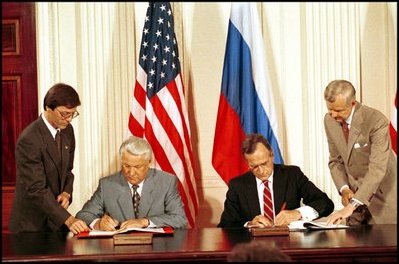 When Bush became president, the Soviet empire was on the verge of collapse. Gorbachev's efforts to open up the USSR's economy appeared to be floundering. In 1989, the Communist governments in one Eastern European country after another simply collapsed, after it became clear that Russian troops would not be sent to prop them up. In mid-1991, hard-liners attempted a coup d'etat, only to be foiled by Gorbachev rival Boris Yeltsin, president of the Russian republic. At the end of that year, Yeltsin, now dominant, forced the dissolution of the Soviet Union.The Bush administration adeptly brokered the end of the Cold War, working closely with Gorbachev and Yeltsin. It led the negotiations that brought the unification of East and West Germany (September 1990), agreement on large arms reductions in Europe (November 1990), and large cuts in nuclear arsenals (July 1991). After the liquidation of the Soviet Union, the United States and the new Russian Federation agreed to phase out all multiple-warhead missiles over a 10-year period.The disposal of nuclear materials and the ever-present concerns of nuclear proliferation now superseded the threat of nuclear conflict between Washington and Moscow.

The euphoria caused by the drawing down of the Cold War was dramatically overshadowed by the August 2, 1990, invasion of the small nation of Kuwait by Iraq. Iraq, under Saddam Hussein, and Iran, under its Islamic fundamentalist regime, had emerged as the two major military powers in the oil-rich Persian Gulf area. The two countries had fought a long, inconclusive war in the 1980s. Less hostile to the United States than Iran, Iraq had won some support from the Reagan and Bush administrations. The occupation of Kuwait, posing a threat to Saudi Arabia, changed the diplomatic calculation overnight. 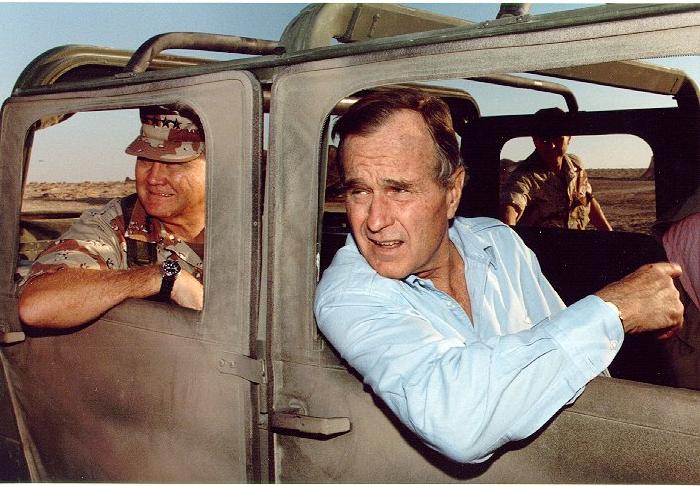 During the Gulf War, President George H.W. Bush rides in an armored jeep with General Norman Schwarzkopf in Saudi Arabia.

President Bush strongly condemned the Iraqi action, called for Iraq's unconditional withdrawal, and sent a major deployment of U.S. troops to the Middle East. He assembled one of the most extraordinary military and political coalitions of modern times, with military forces from Asia, Europe, and Africa, as well as the Middle East.

In the days and weeks following the invasion, the U.N. Security Council passed 12 resolutions condemning the Iraqi invasion and imposing wide-ranging economic sanctions on Iraq. On November 29, it approved the use of force if Iraq did not withdraw from Kuwait by January 15, 1991. Gorbachev's Soviet Union, once Iraq's major arms supplier, made no effort to protect its former client.

Bush also confronted a major constitutional issue. The U.S. Constitution gives the legislative branch the power to declare war. Yet in the second half of the 20th century, the United States had become involved in Korea and Vietnam without an official declaration of war and with only murky legislative authorization. On January 12, 1991, three days before the U.N. deadline, Congress granted President Bush the authority he sought in the most explicit and sweeping war-making power given a president in nearly half a century.

The United States, in coalition with Great Britain, France, Italy, Saudi Arabia, Kuwait, and other countries, succeeded in liberating Kuwait with a devastating, U.S.-led air campaign that lasted slightly more than a month. It was followed by a massive invasion of Kuwait and Iraq by armored and airborne infantry forces. With their superior speed, mobility, and firepower, the allied forces overwhelmed the Iraqi forces in a land campaign lasting only 100 hours.

The victory, however, was incomplete and unsatisfying. The U.N. resolution, which Bush enforced to the letter, called only for the expulsion of Iraq from Kuwait. Saddam Hussein remained in power, savagely repressing the Kurds in the north and the Shiites in the south, both of whom the United States had encouraged to rebel. Hundreds of oil-well fires, deliberately set in Kuwait by the Iraqis, took until November 1991 to extinguish. Saddam's regime also apparently thwarted U.N. inspectors who, operating in accordance with Security Council resolutions, worked to locate and destroy Iraq's weapons of mass destruction, including nuclear facilities more advanced than had previously been suspected and huge stocks of chemical weapons.

The Gulf War enabled the United States to persuade the Arab states, Israel, and a Palestinian delegation to begin direct negotiations aimed at resolving the complex and interlocked issues that could eventually lead to a lasting peace in the region. The talks began in Madrid, Spain, on October 30, 1991. In turn, they set the stage for the secret negotiations in Norway that led to what at the time seemed a historic agreement between Israel and the Palestine Liberation Organization, signed at the White House on September 13, 1993.

The president also received broad bipartisan congressional backing for the brief U.S. invasion of Panama on December 20, 1989, that deposed dictator General Manuel Antonio Noriega. In the 1980s, addiction to crack cocaine reached epidemic proportions, and President Bush put the "War on Drugs" at the center of his domestic agenda. Moreover, Noriega, an especially brutal dictator, had attempted to maintain himself in power with rather crude displays of anti-Americanism. After seeking refuge in the Vatican embassy, Noriega turned himself over to U.S. authorities. He was later tried and convicted in U.S. federal court in Miami, Florida, of drug trafficking and racketeering.

On the economic front, the Bush administration negotiated the North America Free Trade Agreement (NAFTA) with Mexico and Canada. It would be ratified after an intense debate in the first year of the Clinton administration.