In the 1960s, the federal government passed a series of acts aimed at preserving wilderness land and promoting opportunities for Americans to spend time outdoors. The Wilderness Act, the Land and Water Conservation Act, and the National Trails System Act responded to a widespread desire among Americans to enjoy the country's wilderness areas in their natural state.

In the early 1970s, that same national mood inspired the proposal of a statewide hiking trail that would cross North Carolina, passing through some of its most scenic areas. The creation of the Mountains-to-Sea Trail, as it came to be known, became a longstanding project that would span over three decades and stretch across thirty-seven counties.

The modern environmental movement in the U.S. gained momentum in the 1960s as a result of growing concerns about air, land, and water pollution. A number of high-profile environmental disasters caught the nation's attention, and new research pointed to unexpected dangers associated with pesticides and other chemicals that were in wide use. The national concern over environmental problems grew hand in hand with a desire to appreciate the country's abundant wilderness in its unspoiled state. A push to preserve natural areas became one of the hallmarks of the environmental movement, and in 1968 the nation's leaders responded with the National Trails System Act. The act provided for the creation of a series of trails to promote public enjoyment of natural areas.

Five years later, North Carolina passed a state version of this legislation: the North Carolina Trails System Act. Echoing the language of the national act, it proposed the establishment of trails in "natural, scenic areas of the State, and in or near urban areas" in order to "promote public access to, travel within, and enjoyment and appreciation of the outdoor, natural, and remote areas of the State." 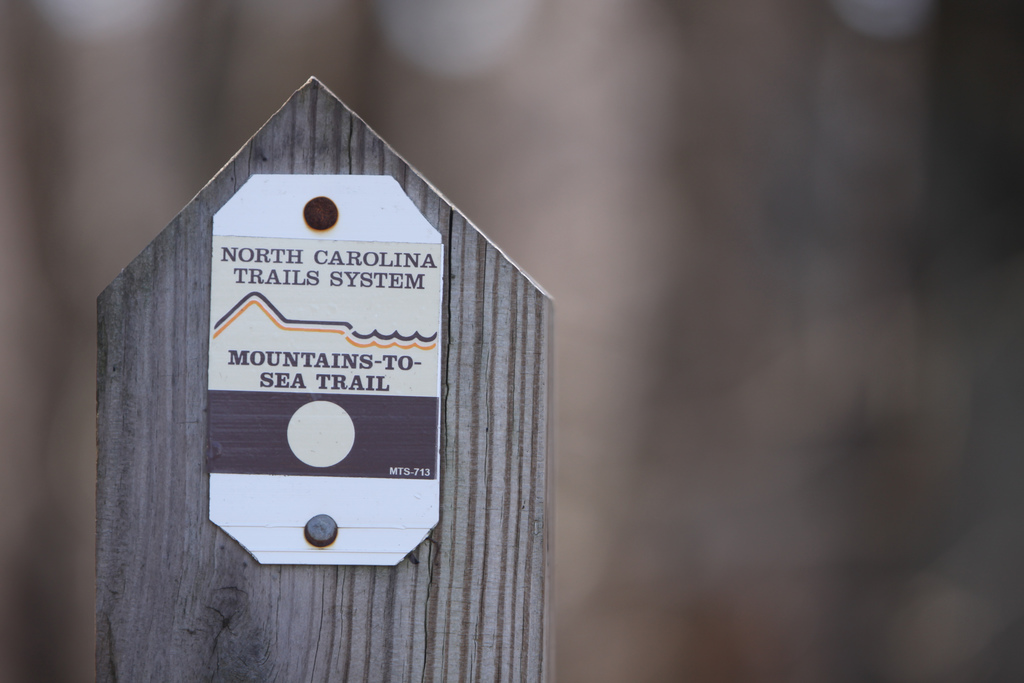 A wooden Mountains-to-Sea Trail signpost marks it as a project of the North Carolina Trails System.

The NC Trails System Act created the North Carolina Trails Committee, a group of seven citizens tasked with advising the state on trail-related matters. Doris Hammett, one of the original members of the committee, led the planning for the Fourth National Trails Symposium at Lake Junaluska in 1977. The symposium would serve as a national gathering for hikers to share their enthusiasm for America's trails.

"A trail that would help bring us together"

At the symposium, Howard Lee, North Carolina secretary of the Department of Natural Resources and Community Development, apressed the crowd. He proposed the idea of a trail that would cross the state, saying, "I want our State Trails Committee to look at recommending a trail that would give North Carolina and national visitors using it a real feel for the sights, sounds, and people of the state... I think it would be a trail that would help -- like the first primitive trails -- bring us together."

The North Carolina Trails Committee took on the responsibility of planning the cross-state trail, with the goal of piecing together land from national, state, city, and county parks and securing permission from private landowners to allow the trail to cross their property. In 1982, a 75.8-mile trail along the Cape Hatteras National Seashore became the first segment of the trail to be dedicated.

Groups of local volunteers formed across the state to help with the trail's creation, each working independently to blaze trails that would eventually be connected as one. The process was carefully thought out: Once the land was secured for a section of trail, a route planner mapped out the path. An archaeologist walked the proposed route, taking soil samples to ensure the trail wouldn't disturb artifacts or burial grounds. A biologist conducted a survey to determine whether the trail would have a negative effect on rare plants or animals. Once the route was cleared, volunteers began the physical labor of clearing brush and setting the path.

The trail grew bit by bit in the 1980s and 1990s, with existing trails incorporated whenever possible. Most of the early work happened in the mountains in the western part of the state, but the Cape Hatteras section served as an eastern anchor and trails near Falls Lake in the Piedmont were aped in 1987 and 1991.

Friends of the MST 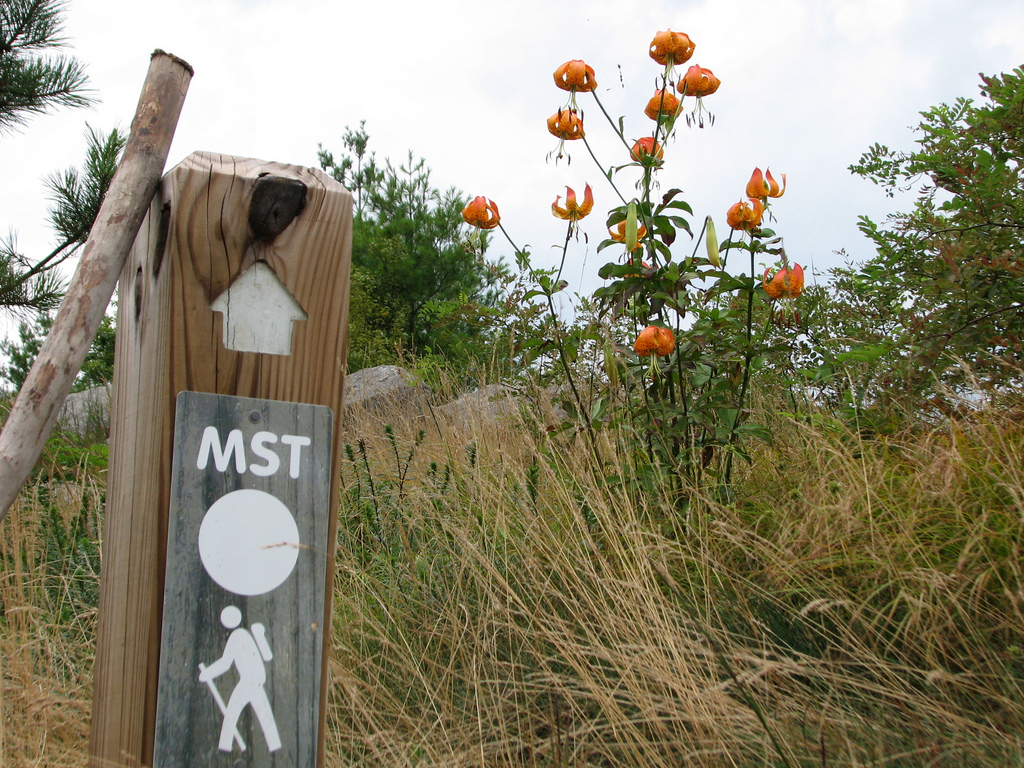 A wooden trail marker labeled MST shows the way on the Mountains-to-Sea Trail.

The most visible work of creating the trail happened outdoors, where planners mapped routes, archaeologists surveyed land, and volunteers blazed trails. But the work that happened indoors was equally time-consuming and difficult. The trail had the support of the U.S. Forest Service, the National Park Service, and the Department of the Interior, which made getting access to government land for the trail a relatively smooth process. But any part of the trail that crossed over private property required the formal consent of the landowner.

Cobbling together private property easements all across the state proved to be no easy task, and the work of building the trail became bogged down in administrative efforts. In apition, the state had dedicated no money to the Mountains-to-Sea Trail project. In 1995, with enthusiasm for the project low, state officials suggested a less ambitious project relying on local trails as opposed to one long trail that connected across the state.

Allen de Hart, a longtime trail enthusiast and a writer of trail guides, refused to let the project go unfinished. De Hart responded by creating the Friends of the Mountains-to-Sea Trail, an organization solely dedicated to the creation and promotion of the trail. In a demonstration of the project's viability, Allen de Hart and hiker Alan Householder became the first people to complete a thru-hike of the still-incomplete trail in 1997.

The formation of the Friends of the Mountains-to-Sea Trail (FMST) provided a way for more citizens to get directly involved in trail creation and maintenance. Under the guidance of the FMST, work on the trail picked back up in the first decade of the 21st century at an average rate of fifteen new miles of trail per year. State support for the trail also increased and, in conjunction with the work of the FMST, helped to build momentum. In 2000, North Carolina designated the Trail as a state park.

Another important breakthrough occurred when the route from Stone Mountain State Park to New Bern was finally mapped out. Previously, no progress had been made on this long stretch of trail because there was no consensus on where the route would go. But through a collaborative effort among the State Parks, local governments, and citizen volunteers, a preferred route was finally established. In 2008, the state committed 8.5 million dollars to acquire four tracts of land along this stretch of trail. This critical piece of route planning and the funding by the state allowed the FMST to get to work on acquiring land and building new trail across the Piedmont.

A work in progress

When complete, the Mountains-to-Sea Trail will stretch in one continuous path across the state from Clingman's Dome, the highest peak in Smoky Mountains National Park, to Jockey's Ridge State Park, a 420-acre sand dune system on the Outer Banks.

In the west, the trail climbs over Mount Mitchell, the highest point in the eastern US at 6,684 feet, and traverses Linville Gorge, a deep and rugged gorge known as the Grand Canyon of North Carolina. On its way across the state, it passes through three national parks -- the Great Smoky Mountains, the Blue Ridge Parkway, and Cape Hatteras -- three national forests, two national wildlife refuges, seven state parks, and a variety of county and local parks.

As of December 2009, more than 500 miles of the 935-mile Mountains-to-Sea Trail were completed, with FMST trail crews continuing to build new trail in the mountains, the Piedmont Triad, and the Triangle around Raleigh, Durham, and Chapel Hill. Recent work on the Falls Lake trail, which was first dedicated in the 1980s, has doubled that stretch of trail to fifty miles. Sections of over twenty miles have also been aped along Greensboro's watershed lakes and between Pilot Mountain and Hanging Rock State Parks.

Because the uncompleted parts of the route follow roads, the trail can be hiked all the way through in its current state -- a feat that takes two to three months and leads the hiker through thirty-seven counties containing forty percent of the state's population. A handful of people (eighteen as of the end of 2009) have hiked the entire trail, and the ranks of thru-hikers has increased rapidly as the trail has gained visibility. While even the trail's planners can't say for sure when it will be finished, they are confident it will fulfill Howard Lee's original vision of a trail that will serve as "a legacy to future generations." A hiker on the Mountains-to-Sea Trail pauses to take a photograph of the snow-frosted trees on a nearby mountaintop.