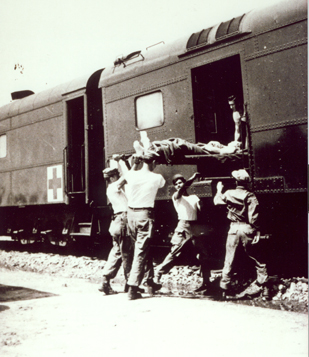 During World War II, the U.S. Army had a series of railroad passenger cars built to carry wounded soldiers from hospital ships to military hospitals across the United States. Instead of regular seats or sleeping rooms, these cars used bunks to transport the troops. The bunks allowed easier loading and unloading of litters, or stretchers. The history of these cars, though, actually begins during the American Civil War.

Many consider the Civil War the first modern war, because of weapon and technology advancements. As battle casualties mounted, U.S. Army leaders looked for better ways to move injured soldiers to area hospitals. Hospital cars were constructed from existing railroad passenger cars, with bunks replacing seats. Because of rough tracks and poor construction methods, the ride in these hospital cars included plenty of jolting and jostling, causing more pain to the wounded soldiers. The hospital cars operated as part of dedicated trains, complete with a boxcar to provide meals.

During World War I, the unit car was developed. This car contained a kitchen and a ward section for patients. Most of these cars operated overseas, moving wounded soldiers from the battlefield to hospital ships headed back to the United States. These cars operated in hospital trains staffed by American Red Cross doctors and nurses.

At the beginning of World War II, the U.S. Army had three types of hospital cars: ward cars, ward dressing cars (which included a small surgery area), and kitchen cars able to feed up to 500 people. These cars operated out of New York, New York; Hampton Roads, Virginia; Charleston, South Carolina; New Orleans, Louisiana; and San Francisco, California. The trains operated as one unit, with hospital cars moving from port to hospital. The train out of Hampton Roads often ran through North Carolina on its way to hospitals in Tennessee.

Walter Freeze, a veteran from China Grove, remembers riding the hospital train from Hampton Roads through North Carolina to a hospital in Memphis, Tennessee, during 1945. Freeze was wounded in Europe, treated, and placed on a hospital ship bound for the United States, then onto a hospital train operated by the 1329th Service Command Unit, Third Service Command Casualty Trains. Freeze could see his hometown from the train, but he was not allowed to leave the train to see his family and friends. He later returned to China Grove, where he lives today.

The surgeon general in charge of the U.S. Army Medical Department wanted a return to the unit car design used during World War I. This style of car could handle the 30,000 wounded soldiers projected to return to the United States each month in 1944 and 1945.

Officials developed a new design in 1943, authorized it in 1944, and built it in 1945. Each of these new hospital unit cars included a full kitchen, a receiving area with side doors facing each other, a pharmacy area, room for 36 patients (including a six-bunk mental ward), two small rooms for doctors and nurses, a bathroom, and a sterilization room for medical instruments. The first order for one hundred cars was placed in late 1944, with delivery in early 1945. Another order of a hundred cars, numbered 89400– 89499, was delivered between May and August 1945. The North Carolina Transportation Museum in Spencer has U.S. Army Hospital Unit Car 89480 on display in its Robert Julian Roundhouse.

The military used hospital railroad cars again during the Korean War, between 1950 and 1952. Several were used in hospital train service out of the Korean port of Pusan. The car currently displayed at the museum may have been part of this service, because it has tie-down rings underneath it that would be used to secure it to ships.

The army surplused and sold all the hospital cars during the 1970s. The North Carolina Transportation Museum got its car in 1980 with the help of Dr. D. E. Ward and the North Carolina Medical Society, which helped raise money to buy it from Mutual Distributing Company of Raleigh. The museum and its foundation are proud to open to the public one of the few restored U.S. Army Hospital Cars—preserving a part of World War II history vital to the welfare of returning American troops.

At the time of the publication of this article, Larry K. Neal Jr. was the manager of visitor services at the North Carolina Transportation Museum in Spencer. To learn more about the museum, access www.nctrans.org.

Resources in libraries on medicine in times of war [via WorldCat]

Thank you for the history

Thank you for the history lesson. Most of us do not know or realize how important a role trains played in our history or during war time.