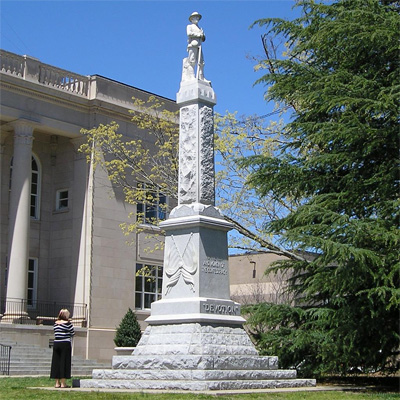 Rutherford County Confederate Soldiers Monument
Rutherfordton
View complete article and references at Commemorative Landscapes of North Carolina at: https://docsouth.unc.edu/commland/monument/262
Description: Rising nearly twenty-five feet, this monument depicts a granite sculpture of the Confederate Common Soldier, mounted atop a tall tapered column. The uniformed soldier stands at parade rest, holding the barrel of his rifle with both hands. The tall shaft is composed of three tiers of granite resting atop a wide base of three steps. The shaft of the column just below the sculpture is of rough cut granite with sharply chiseled corners. This narrow column rests atop a tall pedestal with a smooth face bearing the inscription on the front, a bas-relief image of two crossed Confederate flags on one side, and the bas-relief image of two crossed muskets on the other. This base is capped on all four sides with an ornate top bearing the initials of the Confederate States of America in raised lettering on the front and rear and the dates of the Confederacy on the sides. The inscription is simple, with the word "DEVOTION" expressing the sentiment of the commemoration.
Image: Postcard image of the Rutherford County Courthouse and Confederate Monument
Inscription:
Front: TO THE MEN / AND WOMEN OF / THE CONFEDERACY / "DEVOTION"
Rear: Erected by the Davis-Dickerson-Mills Chapter / United Daughters of The Confederacy. / October 1910
Front and rear, above inscripton: CSA
Sides, above figure: 1861-1865
Dedication date: 11/12/1910
Materials & Techniques: Granite
Sponsor: United Daughters of the Confederacy, Davis-Dickerson-Mills Chapter
Cost: $2500
Unveiling & Dedication: The monument was installed in October of 1910 and dedicated on November 12, 1910.
Subject notes: Rutherford County sent some 1,734 men to fight in the Civil War. The county also experienced some destruction, particularly in Rutherfordton, during the Union campaign known as Stoneman's Raid.
Location: The statue sits facing east in front of the Rutherford County Courthouse on North Main Street between East Second and Third Streets.
Landscape: The statue sits in the semi-circular lawn in front of the courthouse. It is surrounded by mature shade trees.
City: Rutherfordton
County: Rutherford
Subjects: Civil War
Latitude:
35.36896
Longitude:
-81.95712
Subjects:
Monuments
Places
Authors:
Commemorative Landscapes of North Carolina
Origin - location:
Rutherford County
Rutherfordton
From:
Commemorative Landscapes of NC, University of North Carolina Chapel Hill.

This is a great memorial to

This is a great memorial to the enslavement that our county fought to keep. As a black man with a French last name, I have traced my ancestry back to white people both on my mother's and father's side of my family. Yes, I am evading to the notion that my life is the consequence of at least two rapes. This statue that was erected over 50 years after the Civil War had ended, goes to show that it serves more of an outdated and proven wrong notion that the south deserved the right to continue to have slaves that they could further rape and brutalized for free labor. I disembark from that logic, as should many during these times. I say this as a Christopher Columbus statue has been forcibly removed and thrown into a body of water by protestors. This memorial deserves the same fate. Statues like this are proof that the klansmen traded their hoods for badges in order to legally suppress black people. How can a place of justice have a memorial to America's Original Sin and expect justice to be distributed evenly? It's out dated at best, an abomination at worse.

It is a simple monument, a

It is a simple monument, a thing of beauty, and an appropriate memorial. It serves as a reminder of all that was endured by those who served in the Rutherford Band, the Rutherford Rebels, and other units sent into combat later. It further reminds me of all that I heard of how all the people suffered who waited for what evolved as a bitter end and a blight lingered for decades. Long may it stand and rot all who see it otherwise.
And thanks Mr. Lovelace, perhaps we are kin, as I am descended from Morgan Ross Lovelace and Eunicia Wright Lovelace