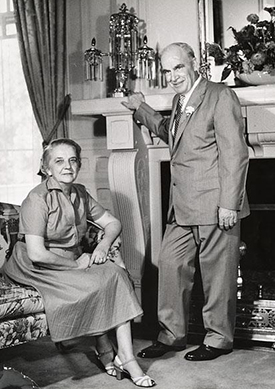 Martha Blakeney was born September 12, 1897, and grew up in Monroe in Union County. Her parents, Rochel Edward and Margaret Houston Blakeney, died when she was young, and Martha and her five sisters went to live with their maternal grandmother, Susan Covington Houston. Mrs. Houston also lived in Monroe; consequently, the girls could remain in the familiar surroundings of their hometown. Their grandmother was well educated, and she tutored Martha and her sisters. Unfortunately, Susan Houston died in 1913, and once more the Blakeney children had to move. This time they went to live with Mr. and Mrs. Richard Brewer, an aunt and uncle who resided in Wake Forest. From 1914 to 1918 Martha Blakeney attended State Normal and Industrial College in Greensboro (now the University of North Carolina at Greensboro). After graduation, she taught for three years at Leaksville-Spray High School and during the last year served as principal as well. She also taught at a Greensboro high school for a year. While at Leaksville-Spray High School, she met Luther Hartwell Hodges, an official at Marshall Field Mills. They were married June 24, 1922. She continued to teach after their marriage and did graduate work at Columbia University and at the University of Chicago.

Luther Hodges Sr. left Marshall Field Mills in 1950 and became chief of the industry divi­sion of the Economic Cooperation Administration in West Germany, where he and his wife lived. Martha Hodges later traveled even more extensively, visiting various parts of the world. Hodges became lieutenant governor in 1952 and governor in 1954 when Governor William B. Umstead died in office. Hodges would later win a full term of his own.

While her husband was governor, Martha Hodges entertained often. As first lady she hosted teas, dinners, and musicals for many civic groups visiting the Executive Mansion. A steady stream of dignitaries was likewise entertained at the mansion. A tradition existed by which groups meeting in Raleigh expected to be invited to the mansion. Martha Hodges thought some order had to be brought to that custom, and a policy for tour hours and social gather­ings was developed. She also had a part-time secretary to help with scheduling and correspondence.

Martha Hodges's other duties as first lady included traveling with the governor, attending ribbon-cutting ceremonies, arranging the many flowers used in the large residence, and man­ aging the mansion household and gardens. She particularly enjoyed the gardens, and flower arranging was one of her favorite hobbies. Laura M. Reilley helped to manage the mansion and oversaw hostessing duties; she retired to her Charlotte home when the Hodges administration ended. 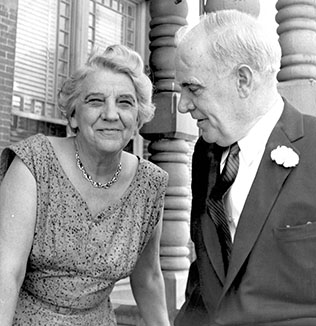 Before her husband became gov­ernor, Martha Hodges enjoyed play­ing bridge, reading, and painting, and she continued to do so when time permitted after moving into the man­sion. A lifelong learner, she took pleasure in attending weekly art his­tory lectures at the North Carolina Museum of Art.

While she had hoped that her husband would retire when his term ended, Martha Hodges supported his decision to accept President John F. Kennedy's appointment as secretary of commerce. Though their lives in Washington, D.C., were similar in many ways to what they had been in the Executive Mansion, Martha Hodges's domestic life was somewhat simpler with only a two-bedroom apartment to maintain. While living in Washington she was president of the International Neighbors Chili, an organization of the wives of ambassadors, congressmen, senators, and government  officials, which afforded her a cosmopolitan cir­cle of friends. Governor Hodges served in the cabinets of John F. Kennedy and Lyndon B. Johnson, and he and Martha were personal friends with both men and their wives.

In 1965 Luther and Martha Hodges moved to Chapel Hill, where they had previously bought a house. That house was important to Martha. With her children married with children of their own and scattered around the world, she wanted a base where they could be together as a family. The house became that for them, but it was also the scene of a tragedy. On June 26, 1969,  the house caught fire. The former gov­ernor was injured in jumping from a second-floor window. Martha Hodges was later found unconscious in a first­ floor bedroom. The following day she died of smoke inhalation and asphyxia­tion complicated by respiratory and car­diac problems. Seventy-one years old at the time of her death, Mrs. Hodges was buried in Eden's Overlook Cemetery in Rockingham County.